Tahiti on a budget: How to visit the famous South Pacific luxury island destination on the cheap

For years I’d been visiting Fiji – one of the friendliest, most spectacular and hip pocket-friendly paradisiacal islands on the planet – and for years I had heard the same candid remark: “If there’s one place that makes Fiji look average, it’s Tahiti”.

But being a French protectorate and the destination of choice for the cashed-up Eurotrash, Tahiti is also super-expensive. So I put Tahiti on the sidelines, saving it for the day when I become filthy rich.

But when I received an invitation from Tahiti Tourisme to visit the islands in exchange for a bit of press, I jumped at the chance. Not only because it represented the opportunity to visit the best-known holiday destination on the planet, but because of the nature of the assignment: instead of putting me up in an opulent resort that charges more for a night’s accommodation than what I paid for my first car, they wanted me to slum it. Well, not slum it exactly, but to stay in budget accommodation to prove you don’t have to be born with a silver spoon in your mouth to visit Tahiti.

So, before I give you the lowdown, professional duty requires me to disclose that my flight and accommodation – the two most costly elements of a holiday – were paid for by the Tahitian taxpayer, and for that I am most grateful. But the rest came out of my own pocket. And while the ground costs ate up the modest fee TNT paid me to write this story, the trip was well worth it. 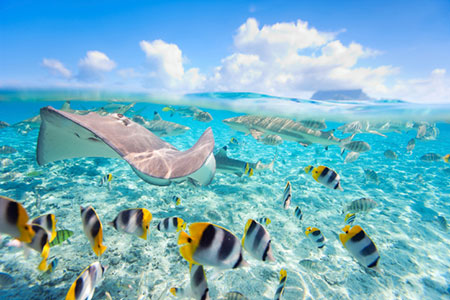 The first snag presented itself the moment I stepped out of Faa’a International Airport into the steamy evening air of Tahiti Nui, the largest Tahitian island. The taxi drivers demanded $40 for the 10-minute ride to the capital and were not open to negotiation. But the backpacker in me kicked in and, a short time later, I’d arranged to split the fare with a friendly couple from Spain. So far, so good.

My hotel, Ahitea Lodge, was a whitewashed villa set in the suburbs of the capital Papeete. A far cry from The InterContinental, but with a swimming pool, communal kitchen, en-suite, TV and fan, it ticked all the boxes and would hopefully allow me to meet like-minded travellers.

Alas, all the other guests were all mature-age Frenchies, so the next morning I set off to explore the port city on my own. I was told when cruise ships dock at Papeete, the city comes alive with thousands of tourists roaming the streets.

But on my first day there it felt like a sleepy backwater, which suited me to a tee. Most visitors to Tahiti skip the capital altogether in favour of the postcard-perfect tourist traps of Moorea and Bora Bora. But after years of independent travel, I’d come to understand these looked-over destinations often have beauty that’s skin-deep, and Papeete certainly didn’t disappoint. 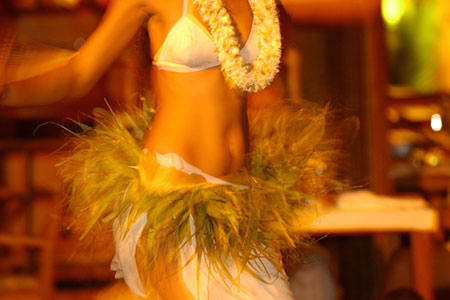 Awash with rustic colonial architecture, broad traffic-choked boulevards and dodgy little take-away joints and bars, Papeete is a Suva-meets-Paris hybrid bursting with colour and charm – the ideal setting for a sultry arte-noire movie or Caribbeanesque video clip – and I absolutely loved it.

Beyond the cliche waterfront district with its overpriced cafes and boutiques was a maze of backstreets and hidden alleyways teeming with life: an impromptu volleyball match with a net strung between crumbling blue and green balustrades; the impressive Cathedrale Notre Dame de Papeete with its murals depicting the introducing of Christianity to noble savages and their topless womenfolk; a multistory central market that sold everything from tacky seashell necklaces, technicolor sarongs, fresh fish, tropical fruits, root vegetables and ubiquitous black pearls.

And behind it all, the colossal, forested cloud-ringed mountains of the interior that lend Papeete a Fantasy Island feel. Lunch comprised a crunchy chicken and cheese baguette and Coke for $6. I bought the only three souvenirs I’d acquire during my stay in Tahiti: a pair of board shorts for myself, a floral choker for my flatmate and a sexy summer dress for my girlfriend – all for $50.

After dark, I grabbed a tangy steak and fries at Les Roulettes – one of a dozen or so restaurants-on-wheels set on the dockside district – for $13. And to top it all off, I sunk a couple of Hinano Tahiti lagers for $7 a pop at a gay club called Le Piano Bar, where I was kind of hit on by a six-foot Polynesian transvestite with the shoulders of an All Black and tribal tattoos on her neck. I say kind of because I don’t speak a word of French. But sometimes, you just know.

Don’t Have A Cow, Man