Take That will meet their nemesis – Fake That – as part of tonight’s TV extravaganza in aid of Comic Relief.

Proving that they can, in fact, take the piss out of themselves, Take That will play along with the skit, in which they come face to face with spoof band Fake That, made up of comedians Alan Carr, Catherine Tate, James Corden, David Walliams and John Bishop.

Neither Carr, Tate, Corden, Walliams or Bishop claim to have much talent in the music department but that won’t stop them having a stab at becoming the new boy-band of the month.

As part of BBC One’s Red Nose Day broadcast, raising money for Comic Relief, Fake That will be put through their paces in an audition judged by Take That themselves. 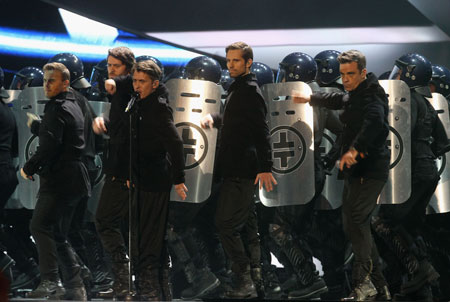 Mark Owen, Jason Orange, Howard Donald, Gary Barlow and Robbie Williams – aka the real Take That – will watch the pretenders go through a series of costume changes, dance routines and musical numbers in the pre-recorded audition.

Little Britain star, Walliams, said: “Being in a boyband for the day was really tiring. We had to do all the dance moves – but when Take That did it they were, like, 22. I’m 39, and I just thought, ‘I can’t handle this!'”

The reactions of Take That have not yet been revealed, but Jason Orange will need thick skin as he is the only band member to be played by a woman – Catherine Tate.

Top 5 dangerous destinations: Places to visit that come with a high travel warning