The Taliban have carried out a bombing in Pakistan in revenge for the killing of Osama bin Laden.

The blasts were the “first revenge” for the killing of bin Laden, the Taliban said.

According to Pakistani authorities, most of those killed by the suicide bomber were newly trained cadets at the Frontier Constabulary training centre in the Shabaqadar area of Charsadda district were.  Many people have also been wounded.

The cadets were boarding vehicles to go home for a short break when the Taliban bomber struck.

US Navy Seals flew in from Afghanistan and shot dead Osama bin Laden at his home in Abbottabad, northern Pakistani on May 2. 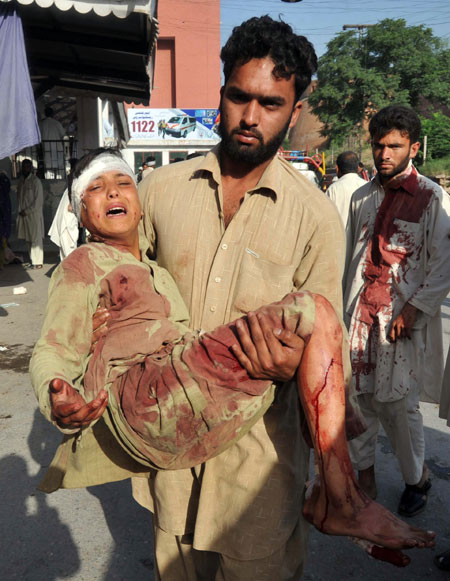 A victim is carried to a hospital in Peshawar, Pakistan, following a suicide bomb attack.

Osama bin Laden’s followers have vowed revenge for his death and the Pakistani Taliban said that today’s bombing in Pakistan was just the beginning.

“There will be more,” militant spokesman Ehsanullah Ehsan told Reuters by telephone from an undisclosed location.

Close allies of al Qaeda, Pakistan’s Taliban are fighting to bring down the state and impose their vision of hard-line Islamist rule.

Allegedly, Pakistan has long used militants to oppose the influence of its rival India. It is widely believed to be helping some militant factions.

The discovery of bin Laden living in the town of Abbottabad, near Pakistan’s top military academy, has led to accusations from the US that officials must have known where the al Qaeda leader was hiding. However, Pakistan strongly denies this.

Today’s bombing by the Taliban comes the day after Pakistani officials said a US drone strike – apparently the third since bin Laden’s death – killed seven suspected militants near the Afghan border.

Pakistani officials have called for an end to the US drone strikes.

Why a traditional matchmaker is the Mary Berry of dating