Tasty morsels: Your guide to al fresco dining and drinking in London this summer

Food fest Feast at Battersea Park this weekend is one such example. A gourmet extravaganza held over three days, it’s a ‘posh picnic’ on the grandest of scales, comprising restaurants, street food, barbecues, a ‘vineyard’, a ‘beach’ and more.

“I came up with the format because I wanted visitors to enjoy a really fun day out with very different eating and drinking experiences,” says Feast event director Sue Hitchen.

Feast is the first shindig the Foodies Festival team, who hold nationwide events, have hosted in Battersea Park. 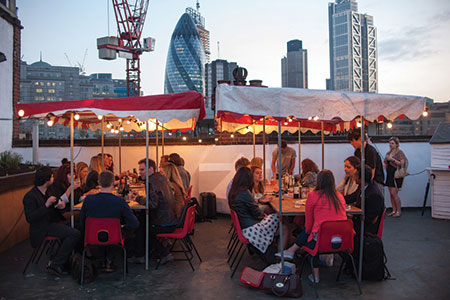 Vino with a view: sip samples and see the city

To make sure Foodies’ Feast serves up this and more there’ll be a big beach where visitors can kick back on deckchairs and enjoy seafood as if they were down on the coast, plus there’s a barbecue arena (of course) and a farm with a tea tent.

You can also learn some new culinary skills and get your hands dirty while stuffing your face. Lessons on offer include truffle- and sushi-making classes, and cocktail workshops that’ll equip you to pull off the finest mojito at your next party. There‘ll also be star chefs, including 2012 Masterchef champ Shelina Permalloo and Anna Kelly of Gordon Ramsay’s new venture London House, in the Chefs’ Arena. 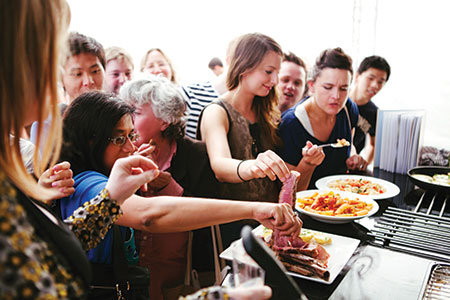 Cooking class: learn while you stuff your face

Hitchen tells us: “I wanted it to reflect the London dining scene [by] developing our street food theme and adding more pop-up restaurants, and the huge feasting tent which will give the event a really convivial posh picnic feel.”

If you want something a little more low-key than a whole park of food and hungry folk, then wine tasting and lunch event Wine On The Roof in east London offers something a little different – and also promises to make “al fresco sexy again”.

“It looks at the lighter side of wine,” says organiser Simon Howland, with different weeks shaped around themes such as Wine Silliness, The Next Big Thing and Pretty In Pink. “The focus is not so much learning to show off but how to have more fun with wine. 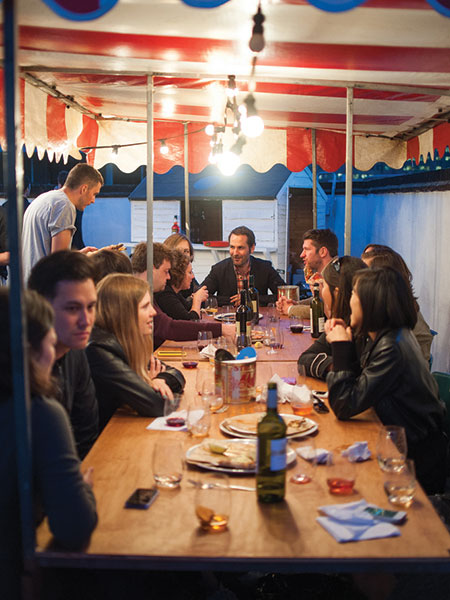 “We’ll spend Saturday afternoon on a roof in central London tasting – and drinking – a selection of unusual and interesting wines and then finish up with lunch at The Long Table on top of [East End pub] The Princess Alice.”

There are also experienced wine gurus on hand to give you guidance as you sup, so you can learn all the tasty trivia you need to make Sideways-era Paul Giamatti look like a layman fool.

“It’s chilled and everyone inevitably ends up hanging around afterwards for a drink,” Howland tells us. So get outside and give your taste buds a treat this summer – your belly will thank you. 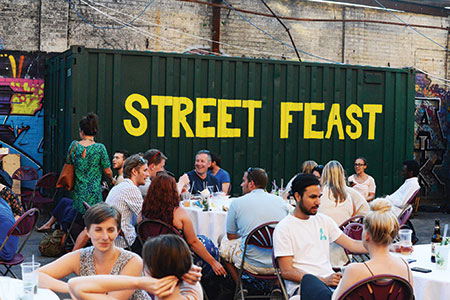 Street food traders including Mama’s Jerk Station, the Sweet Tooth Factory, Big Apple Hot Dogs and Pop Up Barbados will be at this Friday and Saturday street food and drink market in Dalston Yard. Along with all the grub, there’ll be cocktail masterclasses and DJs spinning tunes all day – so get down and enjoy some food and drink in the sun!

Street food takes centre stage over the bank holiday weekend at this year-round weekend market. There’s a mouth-watering array of traders drawn from London’s diverse multicultural street food scene, who will be taking to the Southbank Centre to share the same best quality-boasting, ethics and passion-driven ethos of the Real Food Market. Grab some grub, from American South staples to Indian snacks, and give your taste buds a workout. 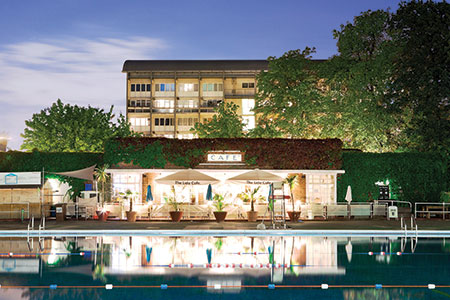 This cafe next to Brockwell Lido is open all summer long, serving up award-winning breakfasts and brunch as well as a full lunch and dinner menu, all made with seasonal British ingredients sourced from local indie producers. They have just launched a menu of craft beers (all brewed in London), too. Probably best to have a dip in the pool before loading up on alcohol and grub, though.

If you’ve seen Only Fools And Horses, then Peckham might not be your first choice for a dinner and drinks night out. Especially not a multi-storey car park in said district. But Frank’s Cafe on the 10th floor of a local concrete car park is one of London’s trendiest spots – expect to queue to get in if the weather’s particularly nice.

The rooftop bar offers lunch at the weekend, as well as a bar snack menu that includes ox heart kebabs, an array of Meantime beers, and cocktails to sup on while you watch the sun set over the city. A far cry from Delboy and Rodders’ Nelson Mandela House and the Nag’s Head. Wed-Sun, 11am-11pm. 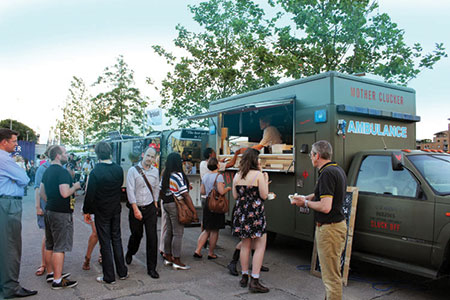 After a stint in Soho earlier this year, this southern fried delight (above) will be parking its truck outside the Truman Brewery with its twice-fried free-range chicken and buttermilk biscuits. 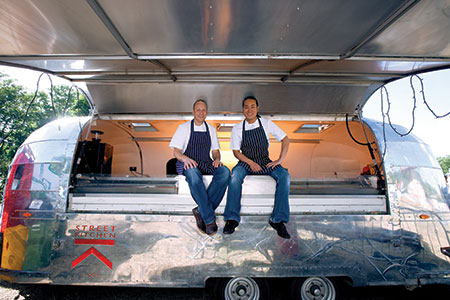 Mark Jankel and Jun Tanaka (above) are the culinary masterminds behind this famed street food with a number of different outlets across the city. Their Airstream One van can be found at the Moto GP at Silverstone soon, while more permanent points include Airstream Two in Broadgate Circle, The Hatch next to Ransome’s Dock in the city’s southwest, and their residency at London Bridge’s The Miller. Celebrated for their dogs ‘n’ slaw as well as their new burdgerdog menu, all food is made using 100 per cent UK ingredients.

Eat My Pies – Across London

Eat My Pies gaffer Andy Bates is a man who is passionate about food and, as the name suggests, about pies especially. There’s hand-held pies, hot pies, pasties, cold raised pies, Scotch eggs, quiches, wraps, sandwiches and rolls even (so not all technically pies, but we’ll let him off). A must for those who like their food simple but stuffed with love. 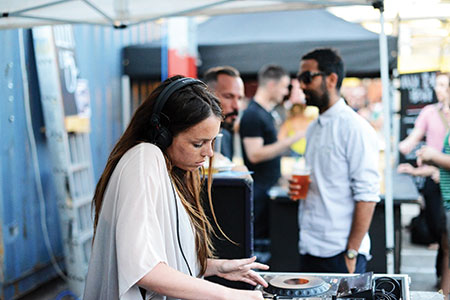 This well-loved local has been serving drinks and food since 1786, when it was then known as the Thameside Waterman’s Inn. It has had a bit of an upgrade since those 18th-century days though, its last arriving only earlier this year when a new menu and dining room were unveiled alongside the retooled outdoor bar, terrace and BBQ area. Which makes it an even greater place for a summertime beer and afternoon barbecue. And on Sep 1 Mr Reggae Reggae Sauce Levi Roots will be playing a one-off show.

This new rooftop bar offers a booze-free option to Londoners. Novel indeed. As well as great views of the city, it has a long menu of mocktails and loads of other alco-free drinks. This new concept is a daring one – the Brits like a drink whatever the excuse – but it could catch on. You won’t be hungover to hell on Monday morning, for one. 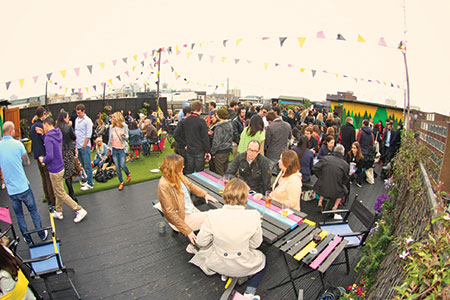 This east London institution’s rooftop is famous for its city views, plus top tunes matched by drinks and eats, with frozen cocktails and a barbecue serving up burgers and more. You can even check out a movie at the Rooftop Film Club while you’re at it.

Promising the freshest pina colada in London, this new al fresco bar serves up the look and feel of a Cuban lounge bar, with cocktails and punch bowls. Yum. 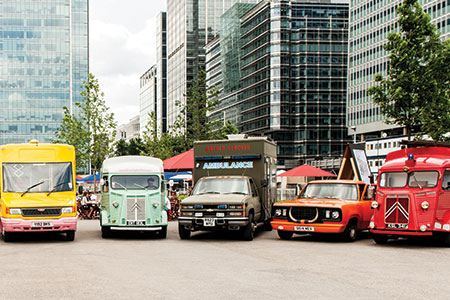 A wealth of Americana-inspired grub served from 20 food trucks make this one of the must-not-miss food events of the summer. Everything from southern fried chicken to smoked lamb wraps served out of the back of the likes of old fire engines, ambulances and milk floats. There will be a keg party, taco shack and a craft beer bar, too.

This one-night-only event raises awareness for the Pig Idea Campaign, which aims to change the EU rule stating catering waste cannot be used to feed pigs but must instead be thrown out. In honour of this, pork pop-up Wiggies will serve up their famous Pig Macs (right). 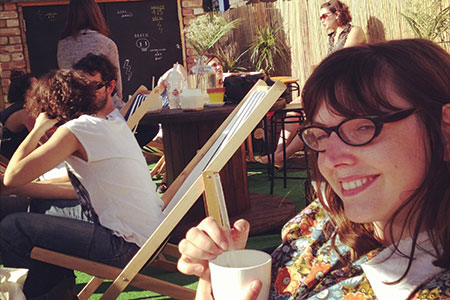 This ‘burger van double parked in Netil Market’, as they say of themselves, brings seriously superior burgers, hot dogs and more to the daily stalls.

As well as the parade and the sound systems, this famous annual two-day event on the August bank holiday is also a great place to check out some of the finest West Indies cooking at the many stalls that line the streets of the well-to-do suburb. 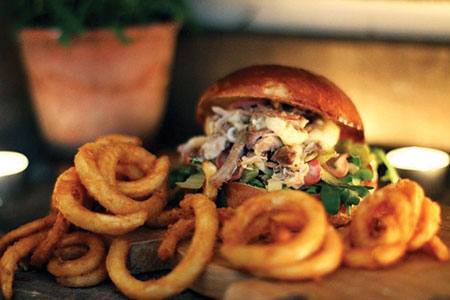 A legendary mainstay of London markets and source of great food and ingredients, this is a fab place to take a stroll around and sample away. There’s also a packed line up of events, including various workshops and demos. July saw the opening of Market Hall, a large glass structure which opens out onto Borough High Street and directly into the Green Market, and is a great new place for food shoppers to sit, relax, chat and, of course, get their teeth into some tasty grub.