Luckily, you can rest happy in the knowledge that there are a whole host of sensational beaches within three hours’ journey from the Big Smoke – and let’s face it, we’ve had bad commutes that took longer than that.

So hop on a plane and before you know it, you’ll be soaking up some rays, getting your surf on and sod it, even ordering a pina colada in a coconut, if that’s what tickles your fancy (note: this is only an acceptable drinks order if you’re actually on a beach).

Here’s our top pick of the best European beaches that are practically on your doorstep. 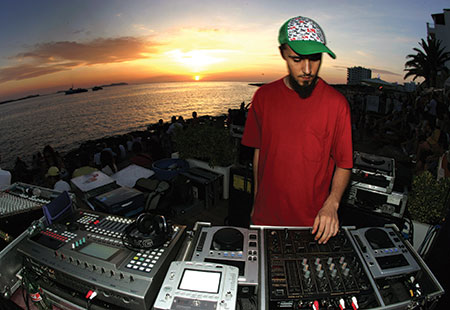 If by ‘holiday’ you mean ‘excuse to crack open your first beer of the day before noon’ then you’d better head for one of the planet’s top party destinations – Ibiza.

Some people choose to stay in quieter parts of the island for relaxed days before heading into Ibiza Town at night to hit superclubs Pacha, Space and various other hedonistic hotspots. But if you’re one of those round-the-clock types, Playa d’en Bossa is the beach for you.

Lined with trendy beach clubs and cafe-cum-bars, you can have cocktails delivered to your lounger from many locations along the beach. This is also the home of infamous beach club Bora Bora, where there’s a party atmosphere with drinking, dancing and DJs from midday onwards.

Events often serve as both pre-party and after-party, depending on how many vodka-Red-Bulls you put away. Expect to tie one on with clubbers still going strong from the night before, or getting an early start.

Get there: Fly from London Gatwick to Ibiza from £130 return with easyJet. 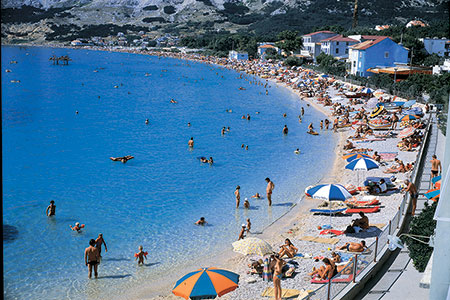 But don’t be alarmed if all you’ve got are ratty old togs. All you really need to enjoy yourself is a good thick towel so you can make yourself comfy on those pesky pebbles while you enjoy the textbook Mediterranean view of palm trees, glistening blue sea and boats a-plenty.

Flight time: One hour and 50 minutes.

Get there: Fly from London Gatwick to Nice from £46 return with easyJet. 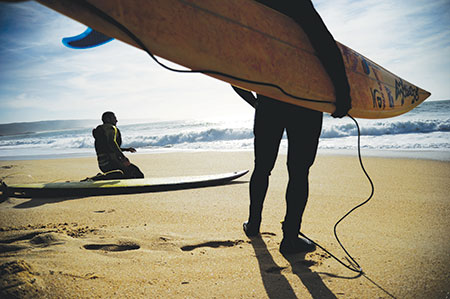 Surfers flock to the southwest of the Algarve each year because, within a small region, there’s enough variety of beach, reef and point breaks to suit anyone – perfect if you’re travelling with mates of mixed surfing ability. It’s turned into a bit of a party hotspot too, with fin-jockeys rocking up at the start of the summer to stay for months on end, hitting the waves by day and bars of the small town by night.

Lots of surf schools and camps have set up over the past few years, and many offer tours of the top surf spots for first-timers to the area, so ask around when you arrive. Praia do Amado is one of the most popular surfer’s beaches because of the consistent break, courtesy of the wind protected beach. It’s a recommended spot for beginners and lots of surf camps are based nearby too.

Get there: Fly from London Luton to Faro with Monarch Airlines from £212. 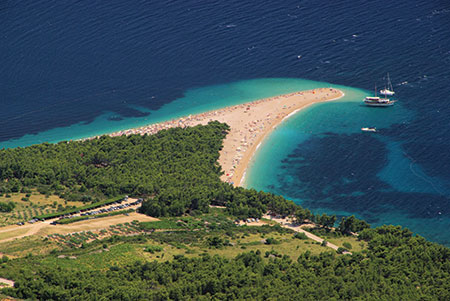 Heading to Croatia for gorge-your-eyes coastal scenery is always a safe bet. With nearly 2000 miles of coastline, and thousands of islands, you really do have your pick of beautiful beaches.

Zlatni Rat on the island of Brac is something special, a V-shaped golden beach (the name means ‘Golden Horn’), which juts out 634m into the Adriatic. Because of its position, the shape of the beach shifts with the tide, currents and wind, so technically speaking, a fresh view will greet you every morning. And if all the sensational scenery isn’t enough of an eyeful, remember that the westernmost edge of the beach is ‘clothing optional’.

If you’re on an island-hopping trip, a great stop further south of the country is the Great Beach (Vela Plaza) at Baska, Krk island. This has heaps of little coves for those wanting to steer clear of crowds and also has a decent nightlife – think lazy cocktail lounges and al fresco restaurants.

Get there: Fly from London Gatwick to Split from £98 return with easyJet. 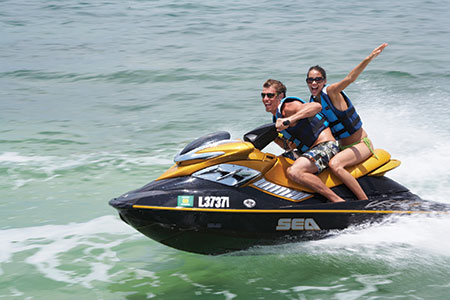 Jet skiing, wakeboarding, tubing, parasailing … do you like your watersports motor-powered, noisy and very high-octane? Try the Costa del Sol’s Fuengirola, a 7km stretch of sand lined with facilities for all the adrenaline-pumping activities you could ask for.

Get there: Fly from London Gatwick to Malaga from £140 return with British Airways. 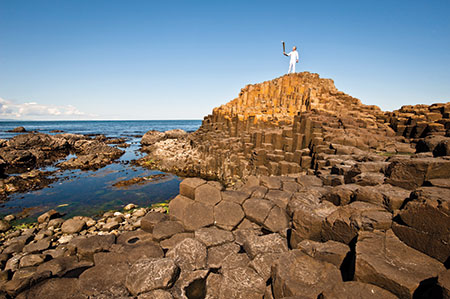 Had your fill of picture-perfect seasides? Mix things up with a visit to one of these unusual beaches, where the sands are far from golden – there’s even a small chance of running into an angry mythical creature.

The Bahamas have practically become a byword for the kind of beaches that make you sigh wistfully just by thinking about them.

But Harbour Island has managed to up the dreamy factor even more, with sands that are a candy floss shade of pink. The soft colour is caused by the tiny particles of red-pink shelled critters called Foraminifera washing up on the beach and mixing in with the white sand. The effect looks likes a scene from a particularly soppy Disney film.

The thousands of interlocked basalt columns on Northern Ireland’s northeastern coast are so uniformly hexaganol they look as though they must have been placed there deliberately. Or, as legend has it, by Irish mythical giant Finn McCool. As the story goes, big Finn was trying to build a sort of bridge to get across the sea to fight a Scottish giant. Other strange rock formations to look out for in this fascinating region are the Giant’s Boot, Giant’s Eyes and Chimney Stacks.

There are plenty of weird sights in Iceland, from spurting geysers to steaming geothermal lagoons, but the southern beach of Vik is especially odd. The sands are jet-black and it rains so much that the cliffs, already a lush green, seem to practically glow. It’s so eerily beautiful that, typically of Iceland, a troll legend has sprung up around it. Tall basalt figures sit out to sea, which are said to be trolls that got caught out in the sun.