The best players of Australia’s State of Origin

After all, how can two blokes, two mates, who play for the same club side team each week, want to absolutely pulverise each other when donning the colours of their states?

The enduring fascination undoubtedly owes much to the time-honoured enmity between Queensland and New South Wales, to the history of the best of the north being lured south by the big money on offer. The Maroons love nothing more than sticking it up the Blues, as they have done for the past six series.

This is the backdrop for a sporting event so steeped in mythology that, in the past, players have come to be defined as much by their performances for their states as for their clubs. So, as Origin 2012 kicks off this week, we examine the legends of this remarkable sporting tradition.

The famous Bulldogs halfback was captain for the first NSW series victory in 1985 after the fired-up Maroons had claimed the first five instalments. Mortimer is regarded as one of NSW’s Origin trailblazers and the image of him, in his fifth and final Origin series, punching the ground in relief after victory, remains an enduring symbol of Origin’s importance.

Before the first Origin series in 1980, some doubters questioned the players’ commitment to the concept. That scepticism was blown away when Queensland captain Beetson belted the lights out of Parramatta teammate Mick Cronin, who was playing for New South Wales. Beetson and Cronin sat next to each other on the plane home and no one ever again questioned whether Origin was fair dinkum. Beetson died last year, aged 66, and the Maroons have promised to use his memory as a spur in this series.

Melbourne Storm’s star hooker has won the award as Queensland’s best player three times since forcing his way into the side in 2005. Smith strung together 19 consecutive Origin matches before succumbing to an elbow injury in 2010. Queensland’s current dominance may be built on their all-star backline, but Smith’s hard graft and consistent excellencce in the front row should never be underestimated. He will now captain his state following the retirement of Darren Lockyer.

Inglis’s decision to don a Maroons jersey is destined to remain a sore point – he was, after all, born and raised in New South Wales. Despite being picked arguably out of position in the first matches of his Origin career, Inglis has still managed to cross for 12 tries in his 16 matches, equal with Dale Shearer who scored 12 tries in 26 matches. Inglis will surely make the record his own this year.

Regarded as his state’s greatest fullback, Queensland’s great stalwart played his final Origin campaign in 2011, finishing a record 36-match Queensland career. He captained in 22 State of Origin Games (second only to Wally Lewis with 30) and proved an inspirational leader, a tough, uncomprimisng but skilful player who built the platform for what has been arguably the most successful Queensland team ever. 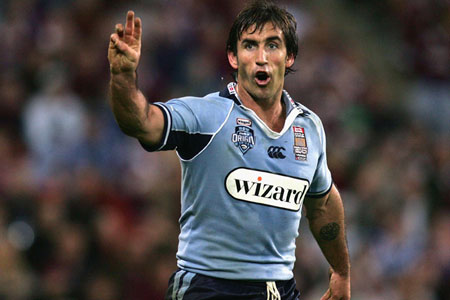 Johns’ playmaking skills and freakish kicking formed the backbone of countless Blues victories between 1995 and 2005. Indeed, it was in 2005, the last series won by NSW, that Johns returned after several weeks on the sidelines with the Blues already 1-0 down. Unfussed, Johns produced two star turns to steer NSW to a series win.

The legendary goal-kicking centre starred for Queensland over a 15-year career – the same bulldozing runs that marked Meninga as one of the all-time great league players were just as evident in Origin. And, incidentally, the Maroons are undefeated over a series since Meninga took over as coach in 2006, cementing his place in the Queensland pantheon.

He remains the Blues’ most capped player, having made 31 appearances – 14 as captain – and his contribution is reflected in the fact that the medal for NSW’s best player each year bears his name. As one of the most athletic five-eighths in the game’s history, Fittler produced some of his finest performances in the cauldron of Origin.

The Little General remains Queensland’s most capped player
and became the oldest player in an Origin series when, in 2001, he returned from England to play in the deciding match at age 35. Many doubted his ability, but he starred, guiding the Maroons to victory. An automatic selection in Queensland’s Team of the Century

No other player is as synonymous with Origin as Wally Lewis, whose eight man of the match awards is double any other player’s. Lewis will always be remembered for his farewell match, the 1991 decider. In the dying minutes, Lewis inspired the Maroons to a two-point win. The image of Lewis lifting the Origin trophy for the last time was made into a statue outside Suncorp Stadium.

If NRL statistics are anything to go by, NSW may feel they are a great chance to finally end Queensland’s dominance in 2012.

In the club season so far this year, the Blues’ backs have crossed for 32 tries in 63 games, while the Reds’ much-vaunted stars have collected just 22 in 67.

However, the Reds have the edge in creativity, ahead in try assists (69-36) and line break assists (59-50) thanks to the form of Cooper Cronk, Johnathan Thurston and Billy Slater. It’s this flair that could well decide what will undoubtedly be the closest series for years.