The big Christmas cook-off and recipe

Don’t you hate spending Christmas Day, shoving a bunch of stuffing up a turkey’s arse and then fretting about whether the bird will emerge from the oven too dry. Wouldn’t it be great to serve something that doesn’t have to be soaked in gravy and that doesn’t lead to resentment from your friends, who were promised a top-notch December 25 feed? Well, there is another way. TNT’s finest headed into battle to road test a true festive culinary treat.

Tom Sturrock: We are only minutes into our cook-off before Jahn’s brown-nosing begins in earnest. “Yes Chef, no Chef, three bags full Chef,” he trills cheerily to our supervising chef, Louis. During Louis’s opening instructions, he catches me several times staring out the window at a fetching secretary. He is displeased. He is also quite short and there is a whiff of a kitchen Napoleon about him. I know his type. His type hate me. This could be tough.

Jan Vannisselroy: Louis is only two weeks out of the mean restaurant kitchens of London, still adapting to life as a civilian. He’s used to bollocking his subordinates but I look him square in the eye and address him as “Chef”. He immediately feels at home. Meanwhile, Tom, preparing the wafers for dessert, begins poorly, dolloping the mixture on to the tray, despite being told to make wafer-thin slices. “He’s painting it on,” I remark. “You’re painting it on,” Chef relays to Tom. This’ll be a doddle, I think.

TS: We’ll be cooking up some delicious pea soup for starters and then a risotto with seven different varieties of wild mushrooms. My only previous experience with wild mushrooms came during a road trip into the English countryside where, after consuming the mushrooms, half-a-dozen of us had an awesome game of hide-and-seek. We begin by chopping the fresh ingredients – Louis doesn’t notice when I chop the parsley instead of the mint. I keep it in my hand until, when no one is looking, dropping it on the floor. It’s all part of the game.

JV: “Look at the size of that,” Chef says, pointing out huge chunks in my bowl of shallots and onions. “I said small pieces.”
I curse inwardly. Then, at the stove, stirring the risotto while adding the mushroom stock, I spill some, causing a huge gush of steam. Tom laughs girlishly, sensing lost points, but Chef sees nothing. Soon after, tossing the mushrooms in a pan, my technique proves a little too rustic, a handful of expensive shrooms falling onto the floor. Still, Chef does not notice. It really must be Christmas. 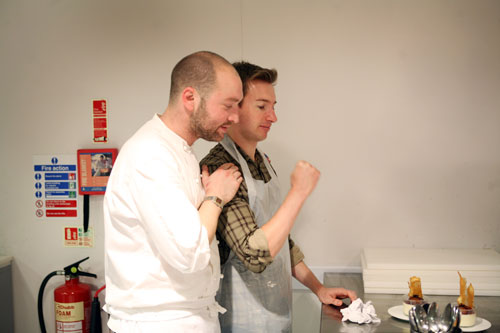 TS: To make our ‘truffles’, we roll chopped cherries around in boozy chocolate, squeeze them into shape and dust them in cocoa. “I want them to be sweet, little chocolate balls,” Louis says, staring at me as I suppress a guffaw at the hilarious double entendre. Once we’re done, Louis inspects our work. “These are the ones I wouldn’t serve,” he says, before singling out my misshapen, oversized truffles. Under my breath, I mutter something about him having a girl’s name.

JV: I’ve seen evidence of Tom’s rubber arm whenever I’ve convinced him to have “one more for the road” but I did think it was just a figure of speech. Seeing him trying to whisk the panna cotta mixture would be funny if it wasn’t so sad, his playdough wrist flailing ineffectually around the edge of the bowl as the mixture refuses to be beaten. “But I’m not used to a whisk,” he whines. Chef and I both shake our heads.

TS: No dish leaves his kitchen, Louis insists, unless it looks like his example. He ladles out the pea soup and then the risotto, before garnishing both. “Decorate it – make it look like a pretty forest,” he says. I copy him perfectly, down to the artistically placed bacon bits in the soup and the delicately strewn pieces of rocket on the risotto. But he is unmoved. “I said I wanted it like a pretty forest,” he says, shaking his head.  What the fuck does that mean, Frenchie?

JV: “Who did this one?” Chef demands, pointing at my risotto, which is elegantly presented, topped off with a parmesan cream foam and slivers of actual truffle. “I became the forest,” I explain. “You also became the winner,” he replies, holding my arm aloft. As we sit munching through this tasty pre-Christmas feast, I can’t help but wonder: why, when the food tastes so good, does Tom have a such sour look on his face? I may have emerged victorious, a deserving champion, but with a recipe this good, really, everyone’s a winner.

Click through to the next page for the delicious recipes… 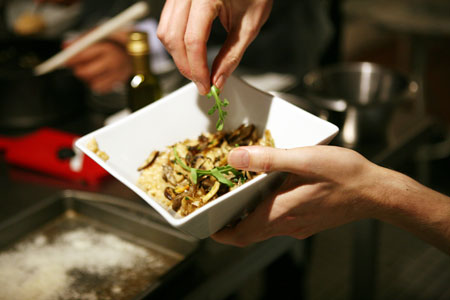 Peel and chop the onion. Finely dice the garlic. Pick the mint leaves.

Heat a splash of olive oil in a saucepan and sweat the onion for about 5 minutes until softened but not coloured. Add the garlic and cook for a minute. Add the stock and as soon as it boils add the peas. Return to the boil and cook for 3 minutes. Stir in the double cream, the mmint leaves and season with salt and pepper.
Blitz the soup in a food processor until smooth. Pass through a fine sieve just before serving.

For the smoked bacon cubes, heat a splash of sunflower oil in a small frying pan. Fry the lardons for a few minutes until golden and crispy. Remove from the pan and place on some kitchen paper to absorb the excess oil.

For the croutons, cut the bread into 1cm cubes. Peel and finely chop the garlic clove. Heat a saucepan and add the sunflower oil. Add the croutons to the pan and fry until golden brown. Add the garlic at the last moment with the butter and then remove from the pan and place on kitchen paper. Season with sea salt and black pepper.

Serve the soup in a bowl. Finish with a drizzle of olive oil and a sprinkling of the lardons and the croutons.

For the cream
For the garnishes

To make the risotto

Soak the dried mushrooms in the water for 30 minutes then bring this stock to the boil. Wash and trim the wild mushrooms. Finely dice the shallot and crush the garlic. Finely grate the parmesan. Dice the butter. Chop the flat parsley.

Sweat the shallot in 25 ml of olive oil with a pinch of salt in a wide bottomed pan. Cook until soft and translucent. Add the garlic and sweat for another minute.

Add the rice and cook for a minute then add the white wine. Stir the rice until the wine is absorbed. Then start to add the mushroom stock ladle by ladle. Always stir the rice until the liquid is absorbed before adding any more stock. Continue until all the liquid is absorbed. Taste the risotto to make sure it is cooked. It should be al dente but not crunchy. If it needs more cooking add some hot water and continue stirring until cooked.

Add the chopped parsley, half of the grated parmesan and 50 grams of butter and stir in. Check the seasoning and add salt and pepper if required.

Cook the wild mushrooms separately in a frying pan with a splash of olive oil. Season with salt and pepper and either mix through the risotto or serve on top.

Whisk the double cream until soft peaks then add the salt, pepper and parmesan.

Serve the risotto in a bowl with a few leaves of rocket, a quenelle of the parmesan chantilly and finish with shavings of fresh truffle.

For the sauce
For the garnish

For the panna cotta

Soak the gelatine leaves in cold water until they are soft. Split the vanilla pod in half and scrape out the seeds.

Place the milk, cream, sugar and vanilla in a saucepan. Bring to the boil and then add the softened gelatine leaves. Stir to dissolve the gelatine.

Pour the liquid through a fine sieve into a jug and then into moulds. Chill in the fridge until set (at least 2 hours).

For the spiced plum compote

Halve the plums and remove the stones. In a saucepan, mix together the red wine and the sugar. Add the spices and bring to the boil. Add the plums and simmer for 20-30 until the plums are soft but not pureed.

Remove from the heat and allow to cool.

For the almond tuiles

Preheat the oven to 180 degrees.

Melt the butter in a saucepan. Combine the icing sugar and flour. Add the melted butter and egg whites to the dry ingredients and and mix to a light batter. Gently fold in the flaked almonds.

Line a baking tray with non stick parchment and spoon small spoons of batter onto the baking sheet. Place in the oven and cook for 6-8 minutes or until golden brown.

Remove from the oven and, while the pastry is still warm, cut into squares or other shapes of your choice. Set aide and leave to cool.

Dice the cherries. Melt the chocolate over a pan of simmering water. Bring the cream to the boil, add the chocolate and mix until smooth and glossy. Stir in the kirsch and diced cherries. Pour into a tray and refrigerate until set.

Once set, cut into squares or use a melon baller to shape. Dust with cocoa powder and serve.