The circus revolution: Cantina, the sultry Aussie circus for adults

Only Cantina, the world renowned collective hailing from Down Under and in town for a five-month run as part of the South Bank’s London Wonderground Festival of circus and cabaret, is far more than just big-top performers of dazzling daring and death-defying expertise.

Featuring the finest circus artists from Circa, La Clique, Acrobat, and Circus Oz and fusing music, magic and displays of acrobatics and dance, Cantina’s take on circus and cabaret is a beguiling, challenging delight where ‘the line between passion and pain is never quite clear’.

“It’s dark, sultry, grown up and above all, showcases some amazing feats of physical and acrobatic skill,” says Ed Bartlam, co-director of Underbelly, the festival organisers.

“Cantina was specifically created to be performed in a Spiegeltent, and that is exactly where they will call home for the summer.“

While the Wonderground sits on the South Bank adjacent to the Udderbelly’s big purple, upturned cow, it was not about to be upstaged by its bovine companion, its own towering red-and- white-spiralled tent a calling card for the London summer.

“We wanted to create a new festival that focused on cabaret, circus and sideshow that centred around a beautiful 1930s Spiegeltent,” Bartlam says of the impetus that led him and co-director Charlie Wood to curate this particular must-see event. 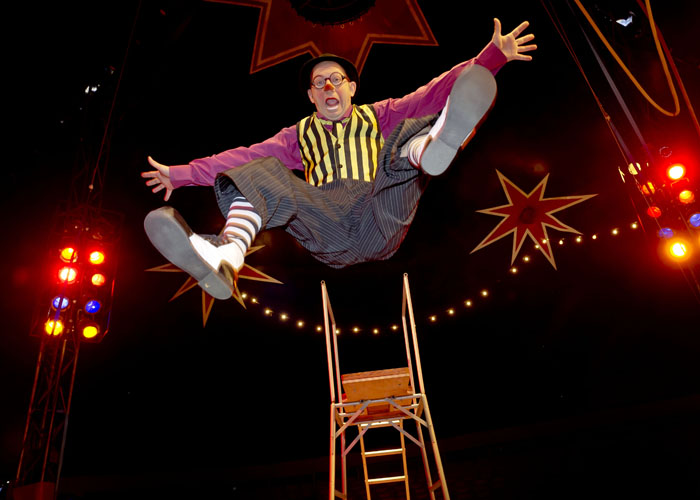 “Coney Island in the early 20th century was rightly called the Playground For The People – it offered something for everybody and invited the public to watch things that they wouldn’t usually see, and be surprised, amazed and astounded in equal measure. We aim to bring that unique atmosphere and immersive experience to South Bank this year.”

There will be a plethora of shows on offer, from vaudeville and theatre to comedy and burlesque.

“We have some of the biggest cabaret stars performing,” Bartlam says. “But we also have a lot of wonderfully eccentric and brilliant shows from up-and-coming stars, too.”

Among the acts are Irish songstress and cabaret performer Camille O’Sullivan; post-post-modern showgirl Meow Meow, who is prone to crowd surfing; and Fascinating Aida, a trio famous for their eight-million-YouTube-hit-scoring ode to budget airlines.

And taking up the mantle of ‘eccentric’ is The Royal Family Of Strange People, led by The Space Cowboy, for whom body mutilation and feats of skill, endurance and barbaric bloody-mindedness aimed
to shock, are par for the course.

So what is Bartlam’s personal favourite of the scores of acts he has co-curated to appear on the banks of the Thames?

“There are lots, so many,” he says. “But just wait until you see one of the female performers tightrope walk in high-heeled stilettos!”

Video: Supporter faints during Barack Obama speech – he handles it like a boss