The Goat vs Boat Race, and more of the best British things to see and do in London

Saddling up for Oxford on the Thames is Kiwi Sam O’Connor, the 10th ever New Zealander to compete in The Boat Race, going for the 159th time. The 25-year-old never thought it possible for a kid from Christchurch to contest such a famous race.

“It wasn’t really on my radar until I went to Harvard and knew people in it,” he says of the traditional crossover US Ivy Leaguers make to their UK equivalent.

“Since I’ve been here, I understand how big it is, doing the weigh-in with a big media presence and photographers snapping away,” the 2006 world junior champion says. 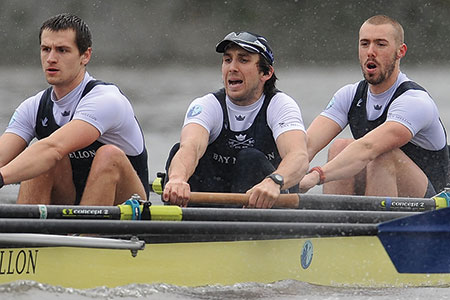 Hardly a toff, as is the clichéd image of Russell Group college rowers, O’Connor drove trucks and forklifts before he took up top level study. He’s even lucky to be here, after he was hit by a car while cycling, putting him out of rowing for a year.

A couple of years on, though, and he’s raring for the big race. Asked why it’s so special, he says originality and history. “It’s different from any other regatta – it’s head-to-head, win or lose, no second chances.”

While the banks of the Thames along the 6.8km course will be packed, a slightly newer English institution, The Goat Race, will enter into its fifth year of general lunacy at Spitalfields City Farm. Co-founder Anthony Goh (so close!) admits it started as a silly conversation at the pub, but has gone on to become a sell-out event. 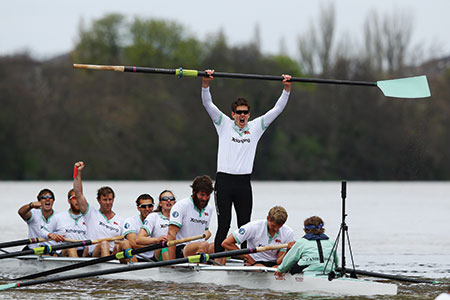 Punters can expect a ‘pogoat’ race and a freestyle ‘gotocross’ comp alongside the main race, plus live bands, DJs, and food and booze from the likes of Meantime and Tongue ‘n’ Cheek (the latter being a street food outfit serving “more sustainable meat cuts” – see the name).

“The Goat Race is less likely to be sabotaged,” reasons Goh when we ask why folks should plump for this over the rowing, referencing last year when Aussie Trenton Oldfield jumped in the river and stopped The Boat Race.

“It’s a different crowd; it’s more inclusive. But really it comes down to whether you prefer men in boats or goats.” 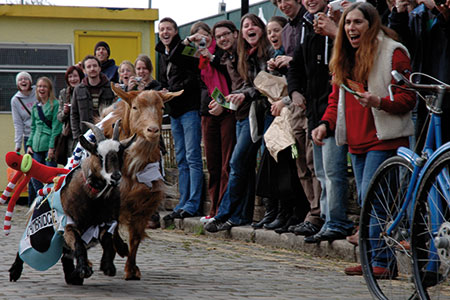 Cambridge has won every Goat Race so far, but Oxford has a fresh chance this year thanks to a change in crew. First-year winner Barney has been brought back for Cambridge and will go head-to-head with a new athlete, fellow pygmy goat Edith, racing for Oxford.

“Pygmy goats are much faster, so this is going to be a more unpredictable race,” Goh promises.The race raises funds for the farm, hidden behind Brick Lane in east London. “It’s a great community project,” says Goh.

“And a chance to see what happens when a pun gets totally out of control.”And there’s no need to limit having lots of jolly good fun to Easter Sunday, there’s four days – Friday to Monday – to fill with fun times.

Here’s our ultimate list of oh-so British things to see and do in London. Pip pip, cheerio! 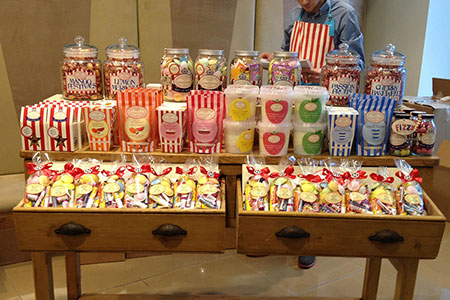 Looking every inch the old-school sweet shop with its candy-striped canopy and classic goodies in jars, this ‘best of British’ confectioner dishes out traditional Brit sweets from way back when, including the likes of cherry Bakewell fudge and Gobstoppers.

Think British ale just means warm, flat and brown? Get enlightened at The Old Brewery, where the bar serves a great range of the Meantime Brewing Company’s produce – and seeing as these guys brew more varieties than any other UK brewery, that’s a lot to choose from.

Try anything from chocolate porter to raspberry wheat beer and Meantime London Pale Ale. Trust us, these are craft brews at their best, and you’ll more than likely find your new favourite pint here. Coopers? Pah! 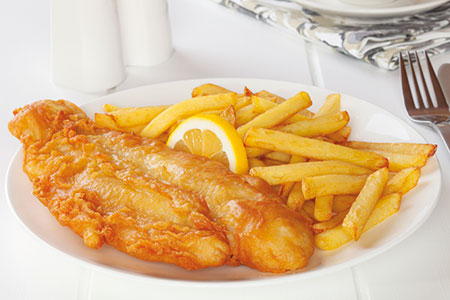 Banishing the all too common disappointment of floppy fish and soggy chips that stick to the paper, Kerbisher & Malt does a fine job of rescuing the reputation of Brit fish and chips, serving what we think is the city’s finest – think melt in the mouth fish and perfect crunchy/fluffy fries.

The Brits take their tea seriously, and never more so than at Teasmith, where you can pull up a pew at the tea bar and choose brews based on how you feel, discover a whole bunch of new teas, or try the tea tasting menu for £20.

These relics of industrial England remain in pockets of the country, with the strangest this in Bethnal Green, which also hosts trendy club nights. 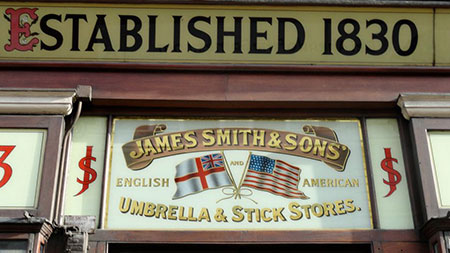 If there’s one thing you absolutely cannot survive without in England, it’s an umbrella (or, to give it a proper English name, a ‘brolly’). To get your hands on a really great British brolly, step back in time at James Smith & Sons, where the shop has remained near unaltered for 140 years (the shop front and fittings are classically Victorian).

The company’s rep for exquisite designs has stayed similarly in tact over time, so if you want to stay dry like a real English gent or lady, make a stop here.

Find out just how good sausages and spuds can taste at this ace joint, where you can mix and match from a list of bangers, mash and gravy. There are some great Brit puds to round off with, too.

An essential London experience is  checking out the digs of fictional detective Sherlock Holmes, who lived at this well preserved address.

Go uber-English and add on a side of bubble and squeak for £1.50. 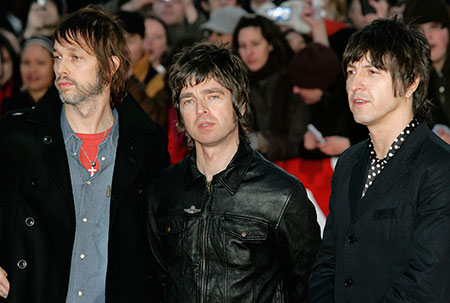 For London’s most quintessentially English night out, get on down to The Borderline, which has been kicking out its Christmas Club indie night for 24 years (it’s the longest-running indie night in the city).

Afternoon tea is an essential British experience – scones and a jolly lovely pot of brew is what being English is all about.

But to show some real dedication to the ritual, try this fancy pants version at The Lanesborough, where a tea sommelier is on hand to guide you towards the perfect cup.

This pocket of peace provides an English woodland walk in Zone 3, plus there’s a sports ground with attending cute cafe. 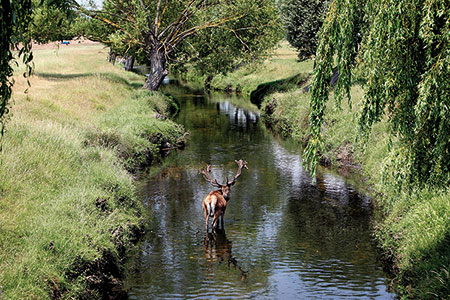 It’s hard to get a feel for the English countryside in London – the grey urbanity hardly lives up to that whole “green and pleasant land” tag – but it’s not impossible.

Head to the sprawling Richmond Park for a refreshing stroll and feel like you’re a million miles from the Big Smoke – there’s deer, miles of greenery and pretty ponds.

Ah, the smack of leather on willow, gents in their whites, nodding off over a Pimm’s …  the village cricket green is a British icon and you can find the oldest one still in use in Mitcham (it dates back to 1685). The Aussies practiced here while on tour in the 19th century.

Trendy coffee aficionados Caravan also serve a cheeky “two crumpets with too much butter” and tea at breakfast and brunch. Indulge, daintily.

Another English staple? Kebab and chips at the end of a boozy night. And that combo doesn’t get any tastier than at this east London gem. 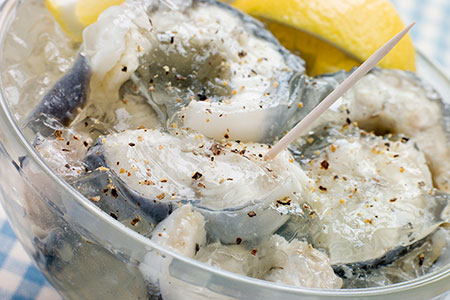 This traditional East End dish (below) probably couldn’t sound less appetising, but for a taste of 18th-century London – when the super-cheap staple kept poorer Londoners fed – you should try them at M. Manze, which first opened in 1902.

If you really can’t face the thought of chopped eels boiled in a spiced stock and then allowed to cool and set into a jelly (come on, yum), order the pie and mash instead.

A Sunday roast down the pub is the only way to mourn the end of the weekend in England, and our very favourite in London is this cheeky little number in Islington.

The pub has an on-site butcher, so the meat is top-notch, while the massive Yorkshire puddings, crotch-ticklingly good creamed leeks and best-ever roast potatoes make sublime sides. As if all that weren’t enough, there’s also a blackboard of craft brews to choose from.

The Woman in Black – review and trailer