The gumboot diaries: TNT does Splendour in the Grass

Day one: Rum and vodka, Roseanne’s rape van, trench foot and the unbearable heaviness of mud

The Sailor Jerry spiced rum and some nasty, off-brand vodka was already flowing side by side with Royal cola and Lido lemonade when I pulled up at a friend of a friend’s place in Belongil Fields outside of Byron Bay.

I was soon made acutely aware that my fake, knock off suede shoes wouldn’t stand a chance against the primordial, clinging mud that had been churned up on the festival site and was (quite rightly) laughed at for not bringing gumboots myself. A quick call to a guy camping on site convinced me that I would be able to purchase some there which, for the time being, allayed my fears.

This was Friday afternoon, sometime after three and we were sitting on the grassy verge drinking and trying to thumb a lift out to the festival.

An elderly woman called Roseanne; in an unremarkable looking white panel van pulled over and offered her services in exchange for a few measly dollars each. Inside her car there was a kind of leather, sideways bench thing which sat three (two legally) and a double mattress in lieu of any backseats which seemed to be reserved purely for her dog. Being one of five and the last to arrive I ended up huddled on the van floor.

Roseanne was your typically lovely Byron hippie. She had spent most of the day shuttling festival goers out to the site and said she had already made enough money to “pay for the van’s registration”. The van’s not even registered? That’s cool…

“How many more people are you going to be driving out to the festival?” one of us asked her and she just shrugged her shoulders, said: “When the sun shines, you might as well make hay.”

Upon arrival, even outside of the festival, the mud was shin deep and the queue of people waiting for their wrist bands to enter the site proper was immense. While I probably did spend 20 or 30 minutes waiting in the line for the wristbands it was basically the only time I had to really wait behind people throughout the whole festival.

Inside I immediately made for the ‘little mall’ where there were vendors selling all manner of things from Doc Martin boots, to American flag onesies and flat brimmed hats. All gumboots though were out of stock, quelle fucking surprise. Trench foot was now a distinct possibility. 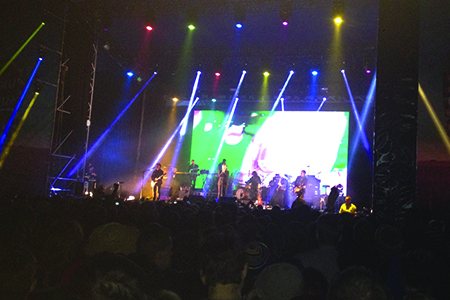 We made for the Supertop (main stage) and caught our first act of the festival; the folk infused light-rock of Australia’s very own Boy & Bear. Their new hit Southern Sun was the highlight of a fairly chilled set of un-offensive, if somewhat uninspiring acoustic-guitar driven, sing-a-longs.

I was struggling in my stupid shoes with the claggy mud and was depressed to discover that (having run out of cigarettes fairly early on in the piece) that the only place to purchase them was at the entrance. I was also doubly disillusioned to discover that, even armed with the best part of $100 worth of drink tickets that I couldn’t really get a full strength alcoholic beverage.

Babyshambles were next and I only made it a few songs before they started up on some kind of ska, three chord shit-tangent which depressed me to my core and drove me out into the plummeting temperatures in search of something more upbeat. Thank heavens for Flight Facilities and their delicious nu-disco.Cutting mean shapes in knee deep mud cradling a fistful of mid-strength ciders was difficult, to say the least, but I managed.

The boys banged out all their hits, including I Didn’t Believe, Crave You and Clare de Lune, all of which had live singing, which was a nice touch.

Feeling much better about everything I headed over to catch the TV on the Radio set. The New York band played a tight set of material predominantly from their last two albums, including favourites of mine off of 2008s seminal Dear Science as well as heart starter Wolf Like Me off of Return to Cookie Mountain.

I finished the night off at the Klaxons set; listening to songs like Golden Skans and Gravity’s Rainbow which transported me back to time spent not studying for my HSC, which was good, in a weird way.

Day one ended the way it had begun, shot gunning a ride in Roseanne’s weird van. There was a young woman passed out face down on the bed in the back. “Is she alive?” somebody asked and Roseanne just laughed, “Don’t worry about her.” 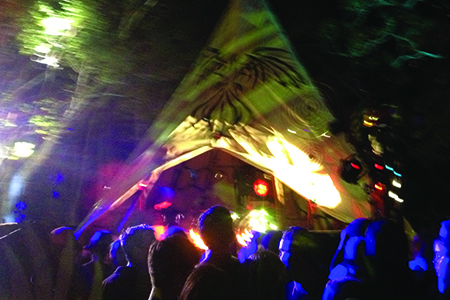 Day Two: Meet the hangover, shut-eye in the passenger seat, mud men and The National

I slept under a towel in the backseat of my car. It was cold and I wouldn’t recommend it.

I woke up with the sun shining through the windscreen and a weird child peering in the passenger side window, apparently checking to see if I had a pulse.

This was Saturday morning and my brain hurt.

After a regroup I managed to get a flask of rum, some cigarettes and a pair of gumboots at varyingly exorbitant price levels. The guy at the camping store tried to talk me into rounding up my gumboot purchase to $50 by offering to throw in a 20 centimetre long knife, which seemed unwise.

By the time we made it out to the site we were just in time to see Californian band Cold War Kids at the Supertop. They certainly know how to write a catchy indie-pop song or two. Songs like Mexican Dogs, Royal Blue and perennial favourite Hang Me Out to Dry all had the kids flailing their arms about with gay abandon in the wallowing mud.

After CWK and a few so-so tracks from Kiwi band Fat Freddy’s Drop I managed to find a bar that sold 30mil nips of full strength booze somewhere near the G.W. McLennan Tent and settled in for a few, with the woozy strains of Sarah Blasko playing in the distance. I got talking to a lovely young lady who seemed rather enamoured with me until her husband walked over and I was forced to beat a rather hasty retreat. C’est la vie.

Everywhere you looked between the stages there seemed to be people, off their faces wrestling with one another in the soggy, glistening mud. I stood in a circle and watched a group of maybe five or six blokes (it was hard to tell quite how many of them were down there in the primordial ooze) slithering over one another, cackling manically with steam billowing off of them into the cool night air.

Back at the Supertop came the highlight of the whole festival, for me anyway. Ohio dirge-rockers The National put on an absolutely consummate performance, with some new songs expertly mixed in with other material spanning their career up to this point. It’s hard to pick a favourite song from the set, so why don’t we just all just agree that it was a great hour and a half.

I capped the night off at the deliciously devious Teepee Forest. People were twirling fire, others were standing transfixed in a kind of maze made out of pink beads and the whole area smelt a little bit like the double mattress in Roseanne’s van.

Shit got a little weird.

I won’t go into how I got back into Byron that night. Suffice to say that it took a long time and was faintly terrifying. 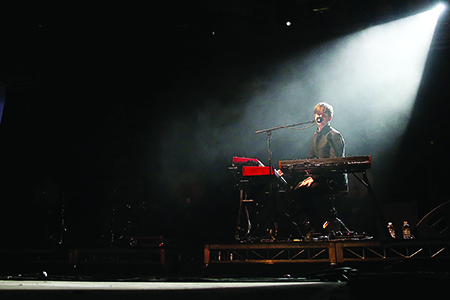 Day three: Broken people – a brace of Melbourne bands and James Blake being a boss

By this stage any semblance of professionalism and Journalistic standards had long gone out the window. My notepads were mud-spattered, my handwriting almost illegible and my phone was out of battery. Still, I, like so many other people tried my best to rally for one last go-round.

There were a lot of broken looking men and women trudging around come Sunday. I arrived fairly early, if not bright eyed or particularly bushy tailed.

Everyone also seemed really upset that Frank Ocean had cancelled. I however, was strangely okay with it.

I caught Melbourne shoegazers Snakadaktal first, whose new album Sleep in the Water is on particularly high rotation for me at the moment. It was great to see such a young band look and sound so assured on a big stage.

I followed up the dreamy sounds of Sanadaktal with the decidedly heavier jams of another Melbourne outfit The Drones. If you’ve never seen these guys live you should. They’re one of the tightest live bands I’ve ever seen and they make a serious racket.

I wrapped up the musical side of things with an absolutely killer set from England’s prince of dubstep James Blake. I’d seen him before but he blew my mind all over again. My favourite moment was probably when he played the achingly beautiful Retrograde from his newest album Overgrown but, to be honest, it was hard to pick just one amazing moment from his set.

Then, you know, back into the car and heading for Sydney.

To sum it all up: the festival site was muddy as anything and – for reasons of my own making – my down time was mostly spent feeling uncomfortable, freezing and occasionally terrified. Yet, it was so much fun!

Splendour in the Grass is, in my opinion anyway, the best of all Australian festivals and I personally can’t wait for next year. Although, I think I’m going to fly up next time.

Images: Getty and my iPhone