Mary Richardson Kennedy, wife of Robert F Kennedy Jr, son of Bobby, was last week found dead at her apartment in New York, after an apparent suicide. Predictably, she has been cited as the latest victim of the Kennedy Curse, the name given to an improbable number of tragedies that have befallen the family.

The popular notion of the Kennedy Curse is one of a string of conspiracy theories that surround the family, from the well-worn and various JFK assassination plots to the more outlandish ideas: the Kennedys are actually Russian Tsars.

Plenty of people, from authors to journalists to pyschics, have speculated as to the source of the disproportionate number of tragedies to hit the family. While newspapers love to scream “Kennedy Curse” from their front pages, the suggestion that the hex itself became a sort of self-fulfilling prophecy has gained traction in online forums, with many people citing the the family’s seemingly innate testosterone- driven joie’ d’vivre as the source for many of the accidents and incidents.

Read on and decide for yourself.

In 1941, Rosemary Kennedy, sister of JFK, underwent a lobotomy ordered by her father Joseph Kennedy, following what is believed to have been bouts of depression. The surgery, then in its infancy, left the 23-year-old with the mental age of a five-year-old. In need of permanent care, Rosemary lived institutionalised until she died in 2005.

Rose’s brother, Joseph Kennedy Jr, died three years later after his plane exploded over Suffolk during WWII. The eldest of Joseph Kennedy Sr’s children had been earmarked for political office due to his father, an ambassador, resigning after making remarks supporting German appeasement. Joseph Kennedy Jr was posthumously awarded the Navy Cross and the Air Medal.

Joseph Jr’s sister, Kathleen Kennedy, a noted London socialite married William Cavendish, a member of the British royal family, despite the protests of her family because of his Anglicanism. However, the couple died in a plane crash in Southern France in 1948.

In 1956, JFK and Jackie Kennedy’s first child was stillborn. The couple’s fourth child, Patrick Kennedy, died two days after his birth 1963, just three months before JFK, then President of the United States, was assassinated in Arlington, Texas. According to a 2009 poll only 10 per cent of Americans believe Kennedy’s killer, Lee Harvey Oswald, acted alone. 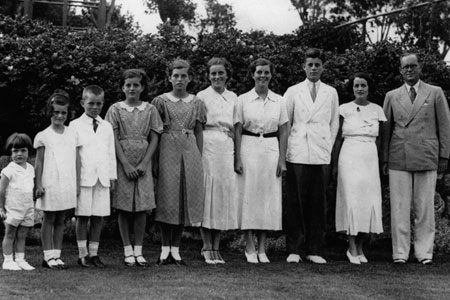 A year later Edward ‘Ted’ Kennedy, the youngest brother of JFK, almost died after a plane crash, which killed the pilot and a close aide, left him with a broken back, punctured lung and internal bleeding. Ted went on to become one of the longest-serving senators in US history.

JFK’s brother Bobby Kennedy was assassinated in 1968 during the Democrat Party presidential primaries, which he was favourite to win. He was a strong supporter of black civil rights and the abolition of the death penalty. Kennedy had just delivered a speech at the Ambassador Hotel after winning the California democrat nomination when he was shot while walking through the kitchen of the hotel by Sirhan Sirhan, a Jordanian who later said he felt betrayed by Kennedy for his support of Israel during the Six Day War.

A year later, the Chappaquiddick incident saw Ted Kennedy accidentally drive his car off a bridge in Massachusetts. While he managed to escape, the car’s other occupant Mary Jo Kopechen was killed after becoming trapped. Kennedy didn’t report the incident, and only came forward the next day after the car was discovered. He recieved a suspended prison sentence for leaving the scene of an accident.

In a televised statement the next day, Ted Kennedy became the first person to acknowledge the idea of a Kennedy Curse, saying: “I wonder whether some awful curse did actually hang over all the Kennedys.”

In 1997, Bobby and Ethel Kennedy’s sixth son, Michael, who ran his brother Joe’s Citizens Energy Corporation, died after he hit a tree playing American football while on skis. Yes, you read that right. Go figure.

Successful publishing executive JFK Jr and his wife Carolyn died en route to the wedding of his cousin Rory, Bobby Kennedy’s youngest daughter, after the light airplane John was piloting came down in the Atlantic ocean. He had not been qualified to fly the plane ”by instruments only”. His overconfidence, a Kennedy family trait, while a factor in his, and their, success, may ultimately be their curse.

Usain Bolt to race Mo Farah over 600m for charity

The London Design Festival: Young designers talk about their inspiration