The Rocky Horror Show, a rock ‘n’ roll musical of seminally epic proportions, marks its 40th anniversary this year with a new production and tour.

Not bad for a show dreamed up by a young man, Richard O’Brien, aching to escape his small town isolation.

“It has survived because it is a voice for the people that feel a bit different and unlike everybody else,” explains Oliver Thornton, who plays the show’s iconic fishnets-wearing Frank-N-Furter, most iconically portrayed by Tim Curry in both the 1973 stage original and the follow-up movie two years later.

“There is a famous line – ‘Don’t dream it, be it’ – about having the courage to live your life as you want to, and that has resonance whether it’s the Seventies or 2013.

”This new anniversary show, which began a year-long UK tour in December and pulls into Wimbledon this month, is looking to be more than just a revival of the famous show and its suspenders, singalongs and the sort of unique audience involvement you just don’t get at other musicals.

“We tried to make it feel as real as possible,” Thornton explains.

“It is still raunchy and everything you’d expect it to be, but without becoming a pantomime, and it’s stronger because of this. 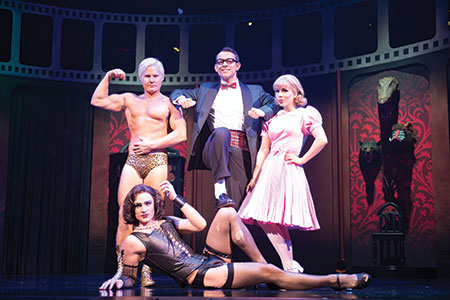 You can come and dance and party but if you want something a bit more substantial it’s there, too.”

For Rocky Horror virgins out there, the show tells of an all-American couple, Brad Majors (Ben Forster, winner of ITV’s Superstar – “I’ve gone from Jesus to G-strings”) and Janet Weiss (Emmerdale’s Roxanne Pallett), who break down in remote nowheresville.

It is here that they wind up looking for assistance at the bizarre home of the eccentric transvestite scientist Dr Frank-N-Furter (Thornton) as he’s about to unleash his creation, Rocky Horror (X Factor’s Rhydian Roberts), with time-warping results that take in the trademark fishnets, escapist rock ‘n’ roll musical numbers, and a loving mockery of science fiction, B-movie nonsense.

This re-tweaked take on O’Brien’s classic, directed by Christopher Luscombe, looked to add something new but without upsetting the dedicated fanbase, a feat which has been a daunting proposition for the cast, thanks to the inherent pressure in portraying such idolised characters.

“There is a pressure with the cult following that know and love what people have done in the past – you don’t want to upset them and go too far away from all of their favourite characters. 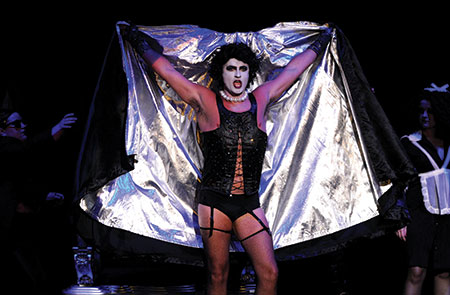 “But you don’t want to do the same as everyone else,” Forster explains boldly of the new production’s aims.

“I didn’t research the other [Brads] as I wanted to do a fresh take, the funniest and sincerest version I could. My Brad, who is a really straight-laced guy, is kind of a geek, and I’m not sure everyone has done that before.”

Thornton adds: “I met a woman who had an image of Frank tattooed on her shoulder.

I was conscious that some of the fans would have seen every Frank going, some of them had seen Tim Curry in the original production even, so you don’t want to disappoint them.”

The up-for-it cast are joined by a substantial budget, and  the grand sets and designs that brings – particular attention was paid to such finer points as the material and trim of Frank-N-Furter’s corset, even – ensures this anniversary tour is dressed to impress, in every single way.

Hitting the road at the end of last year, the cast were quick to learn Rocky Horror fans are in a league of their own, such is the show’s esteemed place in people’s hearts.

“There is nothing quite like it as far as the audience is involved,” Forster enthuses of his experiences so far. “I had heard all about it but it is more than I was expecting. It’s absolute hell!” he adds, joking. 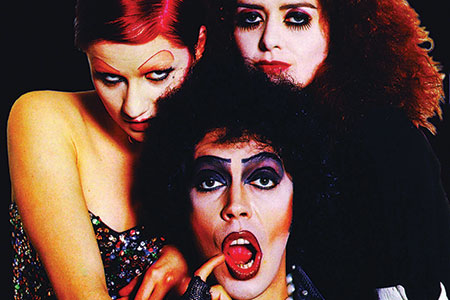 The involvement he is speaking of extends far beyond turning up to performances in full on Rocky Horror costume, but to being actively involved in the show itself.

Shouting out and screaming at the characters on stage throughout the performance is customary.

“Traditionally you shout out insults at us and that takes time to get used to,” Thornton explains of what sounds like a heckle, but is in fact loving audience participation.

“You have to be really switched on and quick-witted,” Forster adds of the perils that come with an excited crowd interjecting at any given moment.

“Your timing has to be spot on to fit all the different audience lines in.

During the first line in my solo song Once In A While, someone always shouts, ‘Brad – how much do you wank?!’ And I have to keep a straight face and keep going.”

For Frank-N-Furter, the inquisitions are just as relentless. “The majority of shout-outs revolve around his genitalia,” Thornton laughs.

“So there is a lot of reference to my groin – as a boy originally from the sticks in Wales, it’s a good thing I have thick enough make-up to hide my blushing.”

Sometimes, the distractions that come while trying to keep a straight face don’t even have to be of the vocal variety, as Forster and Pallett discovered in Brighton last year, where the show’s mammoth tour kicked off. 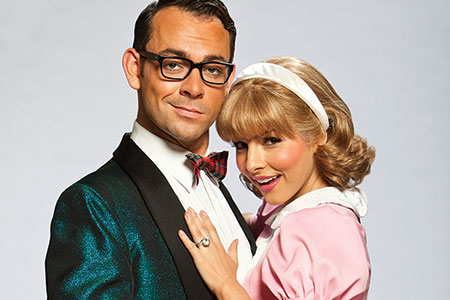 “I got flashed,” Forster recalls of one particular night on the south coast.

“It was a woman of the larger variety and she honestly had the biggest boobs I have ever seen.

Me and Roxanne were doing our opening number and she nudged me going, ‘Look …’ I looked down and was in absolute hysterics.

We came off stage and they were going, ‘What were you laughing at?’, thinking we were being naughty or something.

This tour is far from a victory lap or a final farewell tour, as you might expect from some rock dinosaur entering their fourth decade on the road, and is proof that there is plenty of life – on and off the stage – in the show yet.

So what exactly is the secret to its longevity?

The answer is actually quite simple, according to Forster. “It celebrates people’s inner thoughts.

If you’re a gay man, a straight man, a lesbian, if you feel you want to dress up and go wild and shout something out, it is no holds barred.

It celebrates people and non-conformity, with a crazy storyline and great music – that’s the secret.”

Thornton agrees, adding: “It won’t ever become dated – I’m sure there will be an 80th anniversary tour, too!”

Sounds like it’s time for a trip to see the doctor.

Casey Dellacqua blasts into the US Open last 16