Rain and wind blowing at a maddening 140km/hr had turned the Gulf St Vincent, on South Australia’s coast, into a mess of white-tipped breakers and lashing sea spray. When the Sealink vehicle ferry at Cape Jervis tries to depart, its hull is bashed against the jetty and the service is indefinitely put on hold. And so is my mission to visit Kangaroo Island – a lonely, isolated place regarded as the Galapagos of Australia for its incredibly rich and unique wildlife.

But I couldn’t wait long. Three months later I find myself back on the Sealink ferry, clutching a paper bag, as waves the size of semi-trailers sweep under the bow. Fortunately the wind blows at a relatively calm 25km/hr and it’s a short ride to the disembarkation point at Penneshaw, Kangaroo Island’s near-comatose port. With rows of beach shacks overlooking a bone-white beach where little penguins come out to play at night in the bluest waters this side of Tahiti, Penneshaw is all some holidaymakers see of KI – as locals tend to call it. But like most of the 140,000 people who visit Australia’s third largest island every year, my three-day itinerary is chock-a-block with wildlife sanctuaries, marine parks, beaches, restaurants, wineries, galleries and more. Topping the list is Flinders Chase National Park – an open zoo half the size of Singapore which is 150km to the west of Penneshaw. 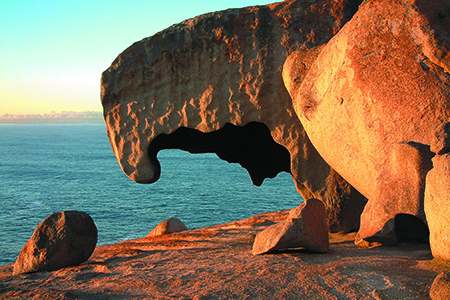 There are vast swaths of native bushland in which to find peace and solitude, as well as campsites, walking tracks and rivers to explore. But the park’s main attraction is Cape du Couedic, a windswept peninsula
on the very southern tip of the island.
Named by French navigator Nicolas Baudin in 1803, the cape’s jagged cliffs and hammering surf claimed the worst of KI’s 80-odd shipwrecks. Among them was the Loch Soy, a Scottish schooner that saw 31 of its 34 passengers and crew lost at sea when it was dashed against the rocks in 1899.

Adelaide newspaper The Advertiser reported surviving seaman William Mitchell saying, “I never saw anything like the sea before, which could not be equalled by Cape Horn or on any other coast to which I have been.” In 1907, more than a century after Baudin logged the cape’s treacherous underwater reefs, the South Australian Marine Board commissioned the building of a 25m-high sandstone lighthouse to prevent further loss of life. Rising monolith-like over a stark, barren headland, the Cape du Couedic Lighthouse is testament to the endurance of KI’s early settlers.

Despite the altruistic nature of their work, the keepers who manned it led stoic, joyless existences until the lighthouse was automated in 1957. Fresh food and fuel were delivered only four times a year, shipped in from the mainland and winched up the cliffs with a flying fox.

A few kilometres east of the fox’s battered remains is a bizarre geological rock formation called the Remarkables. This dome-like cluster of boulders was created 500 million years ago when molten lava rose to the surface. Over time, seawater entered the many cracks and crevices, leaving salt rings that crystallised and expanded. The remaining shapes resemble the cracked skulls and broken bones of an ancient giant, making the Remarkables KI’s most photographed spot.

Another rock of note is Admiral’s Arch – a seaside amphitheatre on the western point of the cape home to a colony of globally endangered New Zealand fur seals. Prized for their luxuriant pelts and fat used to make fuel, lubricants and oil, they were hunted to the point of near extinction in the early 19th century. And while fur seal populations at KI have returned with a vengeance, attempts to rejuvenate Australian sea lions are yet to bare fruit. 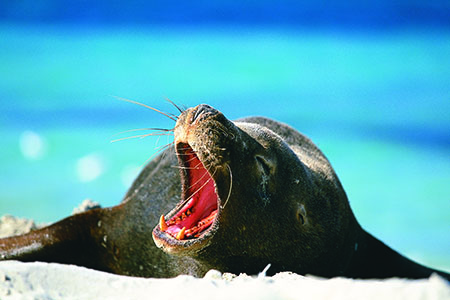 The rarest of all seal species, only 15,000 Australian sea lions remain in the wild today. The largest and most accessible known colony lies an hour’s drive east of Cape du Couedic at the Seal Bay Aquatic Reserve, where up to 1,000 of these seemingly lethargic creatures spend their days sleeping on a windy beach. “When people first started coming here to see the sea lions in the 1950s, they were all la-di-da about it, getting too close and disturbing them.

Many people got bitten,” says ranger Clarence Kennedy. “What they didn’t understand is that sea lions spend up to three days at a time hunting for fish and avoiding sharks in the sea. So when they come in and lie on the beach, they’re exhausted and want to sleep. How would you like someone walking into your bedroom and throwing sand at you?” Access to the beach today is restricted and visitors must join guided tours that give the sea lions a generous buffer zone. Yet the rules don’t diminish the pleasure of seeing a seal pup chase after its mum, or two 300kg males exchanging barks and bites in a turf war. “It’s not about interaction,” Kennedy says. “It’s about watching. And these guys know how to put on a show.”

I spend the night at Kingscote, KI’s largest town, home to half of the island’s 4,200 inhabitants. Set on a tree-lined headland that divides the Bay of Shoals and Nepean Bay on the island’s north coast, Kingscote changes from a sleepy little village in the morning, to a bustling retail hub at noon, then back to its somnolent self before nightfall. A shop assistant tells me about a Chinese tourist who once asked a policeman (there are three on the island) if a state of emergency had been declared after wandering out of his hotel on a Saturday afternoon and seeing the stores had all shut.

Kingscote boasts sensational little restaurants serving up surprisingly sophisticated dishes made of morning-caught seafood and KI’s famous organic produce. With the wind blowing a gale, I decide to spend the day investigating, starting at Kangaroo Island Spirits on Playford Highway.

“Spirits have been distilled on KI for more than 200 years,” says owner John Lark. “The sealers were without doubt making their own whisky. In 1860, when word got out that a 500-tonne schooner carrying a lot of whisky had been shipwrecked at Snug Cove, half of Kingscote rowed out to collect the bottles. They spent two days partying on the cliffs.”

Lark uses local botanicals like native juniper, wild fennel and lemon myrtle to make anisette, limoncello and wild gin. The same philosophy – keep it local, keep it fresh – is applied down the road at the Island Bee Hive. Nothing is added to honey bottled here, though different varietals are cultivated by changing what the bees eat.

“We produce flavours like stingy bark, which is smoky, and cap gum, which has hints of caramel, by placing the beehives next to those plants,” says sales assistant Christine Robinson. “We also make a wide range of beeswax products – candles, toothpaste, shampoo, soap, and a natural antibiotic called ‘propolis’ the bees collect from the leaves. Nothing is wasted.” 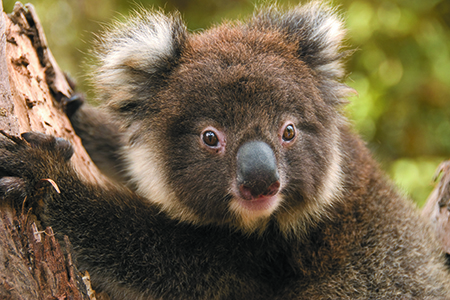 “There are thousands of sheep dairy farms in Europe,” says owner Justin Harman. “But most attempts to bring milking sheep breeds over here failed; the sheep producing 40 per cent less milk. We had the same problem at first, but after 20 years of finding which breeds work better, we are now getting comparable results.”

In addition to sheep yogurt and spicy lamb chorizo, Harman makes a selection of sheep cheese: Kefalotiri, a smooth, creamy cheese from Greece; Manchego, a semi-mature cheese with a mellow but rounded flavor; and Haloumi, a Cyprian cheese eaten hot: pan-fried or barbecued with a squeeze of lemon.

The relentless wind vanishes into thin air on my last day and the thermometer hits 36°C. I spend it charging through the fringing reefs of the north coast aboard a high-speed inflatable boat. Our guide, Andrew Neighbour of Kangaroo Island Marine Adventures, points out pelicans, sea eagles, albatross and osprey fishing in gin-clear waters as we approach Emu Bay for KI’s pièce de résistance: the chance to swim with bottlenose dolphins. The dolphins are elusive today, though we do cross paths with ghost-like manta rays and a few harmless bronze whaler sharks.

But Neighbour continues the search, taking us to another bay where towering 200m-high cliffs – the tallest on the Australian continent – bare down on a beach crawling with seals. There are no dolphins there either but the boat’s radar identifies a large school of wild Australian salmon directly beneath us.
I throw in a fishing line and within seconds hook a feisty 4kg salmon that pulls off a series of impressive manoeuvres in an attempt to dislodge the hook. It manages to get away, though I successfully bring in another a few minutes later.
The rush is superb yet pails in comparison to what I experience half an hour later when a pair of dolphins swim over to say hello.

Taking care not to make a splash, I slip into the water and swim around with these incredibly agile creatures. I always thought dolphins were small, but these are nearly 3m long. “The reason we get such good interaction with them is because the minimal
boat traffic and interference here,” Neighbour says.  “We don’t upset their daily routines, so for now, they are accepting of us.”

Apple iPhone 5 love and hate as Maps App is slated