All you can hear is the sound of your own slow breathing. Lurid yellow, orange and pink fish flash by, like tiny electric bolts.

Your flippers gently brush against the tips of swaying tropical plants and with each metre you swim deeper, there’s another underwater scene, each one more mesmerising than the last. Welcome to the world of scuba diving.

Whether you’re totally hooked on discovering rare marine life, into photographing surreal coral formations, or are planning your very first dive and just don’t want to get chewed up by a shark, we’ve got the perfect diving destination for you here.

From Mexican coral reefs to Second World War shipwrecks in Egypt, to the cutest collection of tropical baby fish you’ll ever see in Mozambique, these are the kind of underwater adventures that will stay with you for the rest of your life. 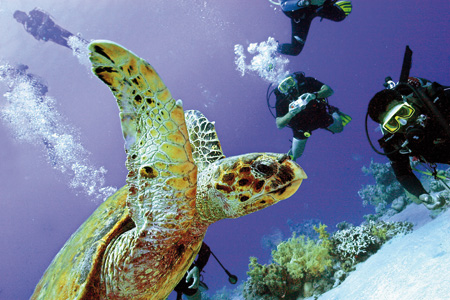 What: There’s something about the idea of exploring decades-old shipwrecks that captures the imagination.

Perhaps it’s the eerie serenity when once the wreck must have been a scene of chaos – or maybe we’ve watched Titanic too often.

The SS Thistlegorm, near Egypt’s popular dive resort Sharm el Sheikh, is one of the world’s most famous wreck diving sites.

The British Merchant Navy ship was heading from Glasgow to Alexandria in 1941, bringing supplies to the Allied Forces stationed there, when it was sunk by the Germans near Ras Muhammad in the Red Sea.

The ship was carrying everything from rifles to jeeps and wellies, all of which now sit at the bottom of the ocean, including the ship itself, complete with the hole where the bomb exploded.

Divers can explore around and inside the silty wreck, using torches to illuminate the rusty artillery and armed vehicles.

Venturing inside a wreck can require extra training, so check what qualifications you need before you book.

Visibility: Up to 30m
ssthistlegorm.com 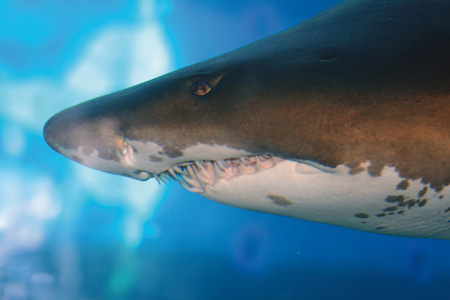 What: It’s a brave (or barmy) diver that goes in search of sharks – did you not watch Jaws as a kid?

But if you’re one of these adrenaline junkies, and your idea of a great diving trip involves coming face to face with the toothy grin of one of nature’s most bloodthirsty species, then the place to do it is the southern Bahamas.

You won’t find many tour operators eager to take groups swimming with man-eating beasts, but if that’s really what you want, Divequest runs trips here where there are occasional sightings of deadly bull sharks.

Thrill seekers, be careful what you do with this information.

Otherwise, head to Elephant Head Rock in Thailand, where the kinds of sharks you’ll find – black tip, white tip and leopards – aren’t dangerous to humans, but are still exhilarating to swim near, if a little intimidating.

As well as the sharks, you’ll also be able to see blue-ringed angelfish, triggerfish and bicolour parrotfish. Those who choose to descend further will be rewarded with glimpses of snapper and yellow goatfish, too. 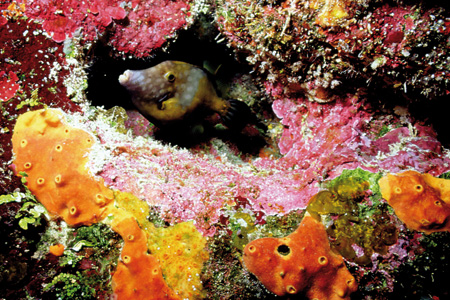 What: Even the most “been there, seen that” divers still get a little misty-eyed when anyone mentions Palancar Reef.

It’s off the southwest side of the island of Cozumel, part of the Arrecifes de Cozumel National Park, in Mexico.

It has four of the most spectacular coral reefs in the world, as well as being home to home to sea turtles, rays, nurse sharks, barracudas, moray eels, lobsters, crabs and a kaleidoscope of colourful fish.

The Palancar Caves are the most famous because of their huge brain corals and swim-through tunnels.

Palancar Horseshoe is an alternative formation of huge corals, or you can venture to Palancar Bricks, which gets its name from the red bricks that were dropped into the area by a capsized barge in the Fifties.

The coral and sponges here are captivating and there’s a chance you’ll also get to see some turtles as well as stingrays.

This area is an excellent place for first-time divers to dip their toes in the water, so to speak.

Palancar Gardens is a shallow diving spot with mellow currents, and is so pretty it’s been nicknamed the ‘underwater Garden of Eden’.

It’s also an excellent place to practice your underwater photography – the diving itself is quite straightforward, the water is clear and the colours and shapes to be seen are nothing short of inspirational. 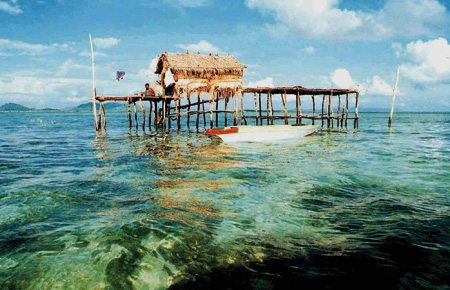 What: Sipadan Island, off Malaysia, tops the list of practically every ‘best dives’ list ever compiled for many reasons.

The incredible 3000 species of fish, not to mention the eye-popping walls of living coral, are just two of them.

But however you choose to spend your time underwater, just make sure you fit in a dive to Turtle Patch, which is located in the southeast corner of the island, just to the northeast of South Point.

Green and hawksbill turtles mate and nest here, and a turtle tomb lies underneath the column of the island.

This submerged limestone cave contains a labyrinth of tunnels and chambers that contain the skeletons of poor turtles
that got lost and died before finding the surface.

A large number of giant turtles come to the patch to rest on the sandy bottom or feed on the sponges.

They’re so accustomed to seeing divers, that they’re not in the slightest bit fazed by their presence, meaning it’s possible to get very close without disturbing them.

Experienced divers recommend the best way of taking in the Turtle Patch is to go first thing in the morning, and let yourself be swept along by the current, which will take you through shallows at a steady pace as you take in the scenery.

While you’re looking out for turtles, don’t forget to also admire the rest of the underwater sights, including staghorn coral stands, spotted sweetlips and pufferfish.

Lionfish and moray eels are also common here and if you’re lucky you could get to see a swirling tornado-like formation of barracudas. 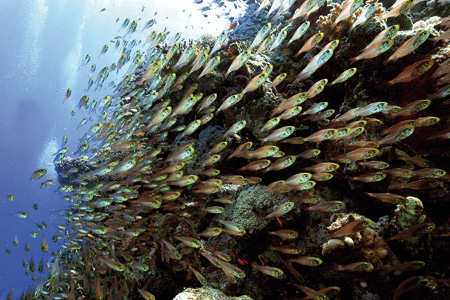 What: If you’ve been harbouring fantasies about your own Finding Nemo moment, go to Clownfish Reef in Mozambique.

Because the reef is sheltered and so shallow, at a maximum of 11m, it’s become a nursery for baby fish, so as well as the cute orange and black clownfish, there are little emperor angelfish, tiny lionfish, baby octopus, small scorpionfish and many other miniature tropical critters.

Schools of fish swim about here and you’ll be able to goggle at colours and patterns you couldn’t even dream up. 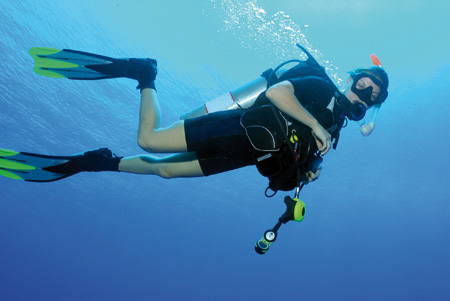 What: Another dive sight for daredevils, the menacingly named Great Blue Hole, is a submarine sinkhole 300m wide and 124m deep.

Formed during the last ice age, it’s made up of karst limestone formations which, over the years, have evolved into ledges that give way to a dark chasm.

Only advanced divers will be able to tackle these waters, but inside are multi-colored stalactites and stalagmites, submerged caves and all sorts of mysterious marine life lurking in the dark blue shadows.

Watch out for giant groupers, nurse sharks and Caribbean reef sharks swimming in this natural phenomenon 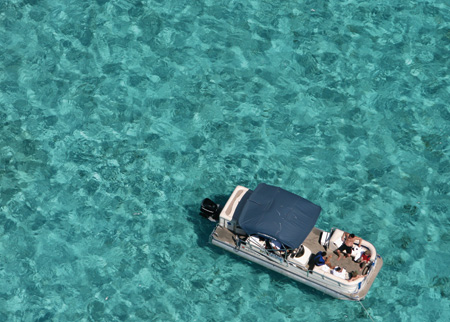 What: The remote island of Pulau Weh, off Indonesia’s Sumatra, is seriously off the beaten track, but if you make the trip you’ll find practically everything on your must-see diving ticklist – sharks, coral, tropical fish and wrecks.

It also offers a rare sight on top of all of that: the very active underwater volcano.

At the relatively shallow depth of 9m, hot gases steam out of fumaroles from the sea floor and you can swim safely through the sea of bubbles.

A dive to see these hot springs is often done in conjunction with a visit to Bu Hila, a well-preserved wrecked tug boat at about 15m deep.

The other selling point of Pulau Weh is that its waters attract sunfish, manta rays and, the largest of all, the whale shark.

There have also been a few sightings of the extremely elusive megamouth shark – as terrifying-looking as they are rare, these weigh up to a tonne and grow up to 5m.

They swim around with their big rubbery mouths wide open. In other words, if you do see one, stay out of its way. 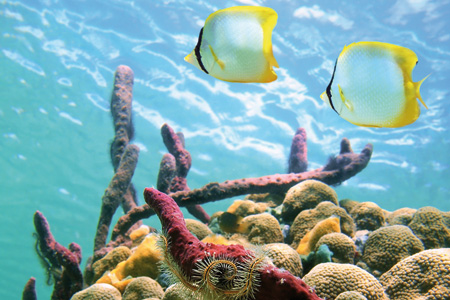 Best of the rest: Padi Courses

Caught the diving bug? You’ll need to invest in a PADI (Professional Association of Diving Instructors) course, which range from beginners to specialist training.

Rainbow Divers do a great value PADI Scuba Diver (entry level) course in Nha Trang, which includes half a day of theory, a pool trial and two off-boat dives the next day.

The next level is an Advanced Open Water Course, which gives you experience in deeper dives and navigation techniques. Island Divers Hawaii, in Oahu, offer this course with 2-3 days of boat diving, including wreck diving and night diving.

If you want to get a professional qualification, take the PADI Divemaster.

It takes between two and four weeks, and you’ll need to have completed 40 dives. Camel Dive Club offer an internship, giving you experience in tutoring others. 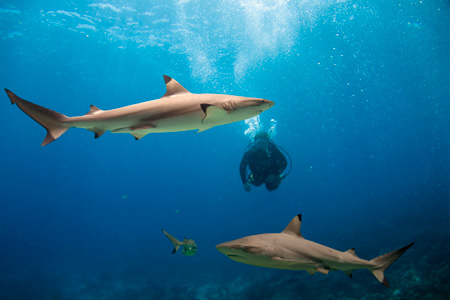 You don’t have to go somewhere exotic to dive; save yourself the airfare and try one of these shark-infested waters closer to home instead.

This centre has the largest collection of sharks in Europe, including sand tigers, nurse, zebra, guitar and lemon sharks. The aquarium offers different experiences for PADI-qualified divers and first-timers.

Introduce yourself to an endangered local species, the angel shark, at Fife’s Deep Sea World.

The angel shark is a flat shark species which used to be found lurking around the UK’s sea beds in deep, muddy waters, but was declared locally extinct in the North Sea in 2006.

You can’t dive with these, but you can get in the tank with sand tiger sharks, conger eels, thornback rays and a stingray.

The surfers might not be too happy to hear this, but there are lots of predatory basking sharks off the coast of Cornwall.

They grow to a whopping 12m-long and have those horrible gaping mouths, but if you’re brave enough to want to visit them you can do so in a purpose-built steel shark cage with Atlantic Diver.

Book early, as there aren’t many tour operators certified to run this trip, so places fill up months in advance.

Could this be the most dangerous zoo in the world?

Now That’s What I Call Music

Law and order in Oz