From the wildlife-rich Amazon to the guerilla infested Darien Gap, we pick five of the best jungle treks.

Best for… Wildlife watchers
Where: Madagascar

Trek description: More than 80 per cent of the wildlife on Madagascar, the world’s fourth-largest island, cannot be found elsewhere. Despite heavy logging, huge swathes of rainforest remain in the north and down the east coast. Montagne d’Ambre in the far north is an intriguing mountain wilderness, home to some of the weirdest-looking creatures on our planet.

Watch out for: One of the worst facets of Montagne d’Ambre’s incredible bio-diversity is that it boasts 21 different types of mosquito, including the voracious malaria-carrying anopheles.

How to plan: The French colonials did a thorough job of mapping the wilderness and you can buy detailed tactical pilotage charts at good map shops, like Stanfords’ in Covent Garden (stanfords.co.uk). Getting around this immense island can be time-consuming unless you fly, but a road trip to the north is guaranteed to be an adventure.

When to go: December to March is cyclone season in the Indian Ocean.
Getting there: Flights from London to Antananarivo start from £749.
Visas: All foreign visitors must apply for a visa prior to arrival. A one-month visa costs US$30.
Currency: £1 = 2.98 Madagascar Ariary.
Language: Malagasy and French.
Going out: A beer costs about 60p. 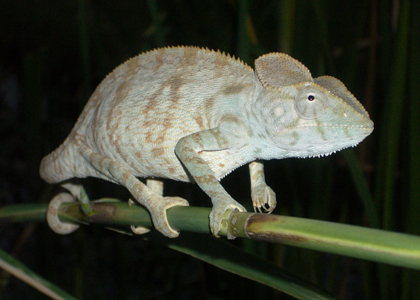 Best for… Culture Vultures
Where: Borneo

Trek description: While Sarawak, Sabah and Brunei boast well-developed tourism infrastructures, Kalimantan (the southern, Indonesian area of Borneo) is the most unexplored region. It is also immense. Five days upriver by cargo boat will get you to Putussibau, but this is still only the gateway to the jungle. Trek inland and you’ll find friendly Dayak villages and longhouses where life has remained virtually unchanged for hundreds of years.

Watch out for: Thankfully headhunting (taking a person’s head after killing them) is a thing of the past. Poisonous snakes are not uncommon, but leeches will be your most persistent attacker.

How to plan: If you’re heading into uncharted jungle, maps will be of little use. It is possible to carry out an in-depth recce via Google Earth and to load waypoints for your trek onto a GPS, but enlisting the services of a reliable and experienced local guide is your best bet.

Book it: WWF-affiliated Kompakh (kompakh.org) in Putussibau, offers a range of jungle trips throughout the region.

When to go: Avoid the rainy season (October to February) when many roads (not to mention jungle paths and rivers) become impassable.
Getting there: Fly to Pontianak via Jakarta.
Visas: Buy a 30-day visa for US$30 on arrival.
Currency: £1 = 14,000  Indonesia Rupiahs.
Language: Bahasa Indonesia.
Going out: A beer costs about 30p. 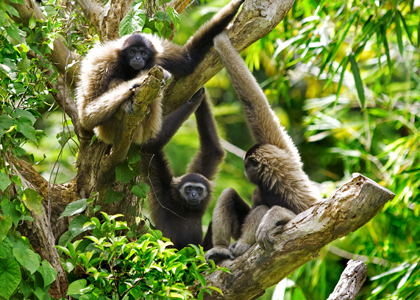 Best for… Danger seekers
Where: Panama

Trek description: The Darien Gap is one of the world’s most dangerous places and to attempt to trek across the border between Panama and Colombia would be potentially suicidal. However, with careful planning and good guides it’s possible to trek from coast to coast on the Panamanian side.

Watch out for: Anyone you meet deep in the Darien jungle is likely to be a drug trafficker, a guerrilla, a bandit … or a mix of all three!

How to plan: Thorough planning is essential but keep the exact details as secret as possible. Do not be predictable: kidnapping is big business across the border in Colombia. Hire your guides through a local village headman rather than casual acquaintances.

Book it: There are no tour operators in this risky region and few guides know the area well. Panamanian photographer José Angel Murillo, who has trekked through the region many times, is a good contact. Get more info at jamurillo.com.

When to go: Dry season is mid-December to mid-April but the Caribbean gets sporadic rainfall all year round.
Getting there: Fly from London to Panama City from about £595, then take  a ‘bush-hopper flight’ to the San Blas islands to begin your trek.
Visas: Australians, Kiwis and South Africans need to buy a US$5 tourist card for a 90-day stay.
Currency: £1 = 1.56 US Dollars (official currency in Panama).
Language: Spanish.
Going out: A beer is about 60p. 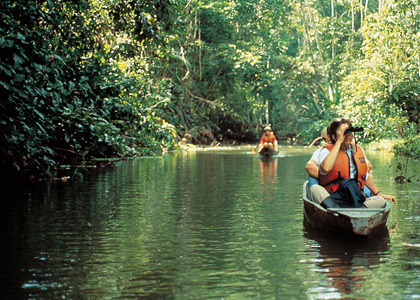 Best for … River Rats
Where: Amazon

Trek description: The world’s greatest river and its biggest jungle is a must-see for adventurous travellers. You may not  be made of the same mettle as Ed Stafford, who recently completed a walk down the entire length of the Amazon, but Manaus, the Amazonian ‘capital’, offers river trips and treks to suit all tastes.

Watch out for: Among its cuter inhabitants, such as otters and pink dolphins, the Amazon also boasts piranhas, caiman and candiru – horrific little fish that swim up the urinary tract of unsuspecting trekkers.

How to plan: Tour operators in Manaus will help plan excursions to the Amazon.

Book it: Find a local tour operator in Manaus or book before you go through a specialist operator, such as Journey Latin America (journeylatinamerica.co.uk).

When to go: Low season (May to September) is cheaper and less crowded.
Getting there: Return flights from London to Manaus start at £749.
Visas: Aussies and Kiwis need a visa.
Currency: £1 = 2.74 Brazil Reais.
Language: Brazilian Portuguese.
Going out: A beer is about 70p. 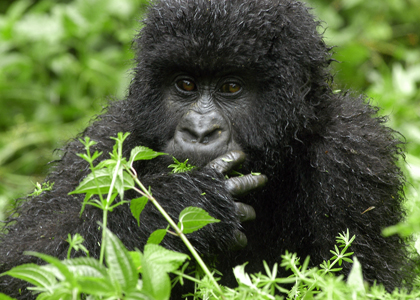 Best for … Going Ape
Where: Uganda

Trek Description: Mgahinga Gorilla National Park is a trans-frontier park that shares borders with Rwanda and the Congo (DLC). This central African highland jungle and bamboo forest is home to some of the last big bands of gorillas.

Watch out for: Only attempt a border trek along the DRC with armed rangers.

How to plan: Mgahinga is hard to access without a self-drive 4WD so arrange a tour in Bwindi Impenetrable Forest, which has more tourism infrastructure.

When to go: Uganda’s climate is balmy all year round.
Getting there: Global Village (globalvillage-travel.com) offers return flights to Kampala from £558.
Visas: All visitors require visas (available at all major land borders and Entebbe airport. A three-month visa costs US$30.
Currency: £1 = 3,000 Uganda Shillings.
Language: English.
Going out: A beer costs about 30p. 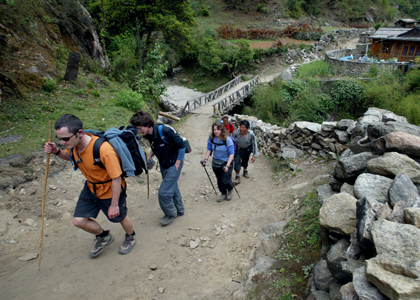 Tips for planning your own jungle trek

1. Research thoroughly in advance and try to learn the local language. The relevant Lonely Planet is the best first stop and Google Earth provides  a real-life picture of the sort of terrain you will be going through.

2. Hire reliable and experienced local guides through a headman where possible – village honour often counts for far more than local law enforcement in many developing countries.

3. Haggle hard to fix the guide’s price before departure, but let it be known there is a big bonus held back if you are happy with the experience.

4. Log your planned route into  a GPS but also waypoint potential escape routes for use in case of  injury or illness. Allow family and  friends to follow your progress in real time through the remotest terrain  using a spot tracking device (findmespot.com). More importantly, its SOS rescue feature could potentially save your life.

5. Travel light. You can get by with  a lightweight jungle hammock  and two changes of clothing: one  for trekking (you are sweaty and dirty within 10 minutes anyway) and one for sleeping (never underestimate the benefit of a good night’s sleep).  Ensure your equipment and footwear is up to the job and allow extra space for a good medical kit.