There’s still too much crude knockabout humour in the shape of a tubby nanny and a shipwrecked middle-aged manservant who pursues (and is pursued by) her, but this time round it’s part of a storyline which takes liberties with Shakespeare’s The Tempest to create the island of Amaluna where the celebrations to commemorate Miranda’s coming of age kick off with a troupe of supremely agile tumblers in leopard lizard costumes.

There’s a protective half human Caliban character (here called Cali and sporting an outsize wraparound lizard tail with a somewhat disconcerting life of its own) who juggles an increasing numbers of balls as they drop from the heavens. The Storm Goddesses swing out in synchrony over the stalls, whilst the gymnastic Castaways impress on a teeter board. Miranda herself swirls around in a water-filled bowl, and shows off her one-handed balancing and contortion skills on its rim. 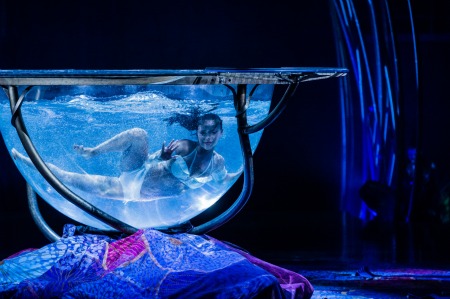 But with one exception, after two decades of appearing at this venue, there’s nothing spectacularly new here – the company knows its formula of lavish costumes and atmospheric music (this time provided by an all-female rock band) and sticks to it. So the most memorable act comes from the Balance Goddess who, picking them up one by one with her feet, constructs an enormous skeletally-ribbed structure of extra-long plant sticks to the sound of amplified breathing.