Played out on a narrowing metal tunnel, like an underpass with sliding hidden passageways, Carrie Cracknell and Aussie choreographer Lucy Guerin’s striking production runs for two interval free hours and makes drastic cuts to the text. Right from the start, it establishes Macbeth’s credentials as an experienced fighter, viciously slitting the throat of an enemy soldier before encountering the three witches who will change his destiny. They (like the agile murderers he subsequently hires to despatch Prasanna Puwanarajah’s Banquo), are played by dancers. Mannequin-like and clad in nude body stockings, their angular, juddering movements echo Macbeth’s increasingly disturbed frame of mind. Later, he imitates their actions. 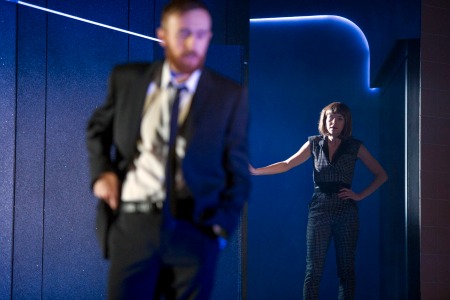 But though visually arresting, something is missing. In the title role, John Heffernan (one of my favourite actors) really comes into his own in the closing moments as the enormity of his crimes strikes home, but there seems little emotional connection between him and Anna Maxwell Martin’s impatient Lady Macbeth – perhaps their marriage was already on the rocks, damaged, here, by PTSD and the loss of a child.

Yet despite its flaws, it’s an interesting experiment which sidelines minor characters whilst bringing Shakespeare’s tragedy into the 21st century with its strobe lighting, swift decapitations and plastic wrapped bodies.

Death at a Funeral – review

Two of the best festivals for Autumn