It’s taken 13 years – and almost 6 weeks of previews – for Gurinder Chadha’s 2002 low budget hit film to finally reach the stage – but this new musical (with witty lyrics by Charles Hart and a catchy score courtesy of Howard Goodall)  is every bit as enjoyable as the movie which helped make Keira Knightley’s name.

Southall teenager Jess loves football – but not only is she a girl, she also comes from a traditional Sikh family which thinks that, at 18, it really is time for her to jettison the David Beckham posters which adorn her bedroom and start behaving like a good Indian girl should. But whilst her older sister Pinky (a preening Preeya Kalidas) is busy making wedding plans, Jess is introduced to an all girl football team by Jules (Lauren Samuels in the role originally played by Knightley) and, secretly, becomes their star striker. 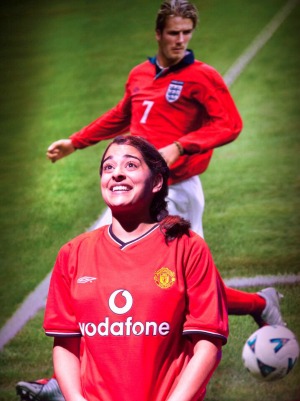 Natalie Dew make a suitably defiant Jess, whilst both Tony Jayawardena (as her sympathetic father who once had dreams of his own) and Jamal Andreas (as her close, in the closet friend Tony) provide likeable support. Best of all, though, is Sophie-Louise Dann’s rendition of There She Goes, a haunting melody sung by a single parent trying to understand her tomboy daughter Jules in this exuberant, feel-good musical with its pleas for tolerance.

Man sets himself on fire in bid to kill bedbugs