The real Sky Ride: Masters of Dirt in London

These riders are Masters of Dirt. Although a more accurate description of their specialised skills and talents might be, “Masters of death-defying, aerial assault motor-stunts … and dirt” such is the dazzling array of tricks and displays set to unload at the event.

Hitting London for the first time, Masters of Dirt, which has toured across Europe over the past ten years, is a world-class FMX (that’s freestyle motocross to the uninitiated) and bike stunt entertainment show.

It’s not as much about racing as it is about man and machine, hurtling skywards, performing a backflip or two, shooting fireworks from handle-bars, in a glittering array of mid-air pyrotechnics and then returning, as one, to Earth with barely a bruise to show for it.

The freestlye motocross, in which competitors aim to impress judges for the best scores, is not just reserved for two-wheeled machines – there are mini-bikes, mountain bikes, BMX and even snowmobile riders, all packed into a show-stopping two-and-a-half-hour performance of gravity-mocking tricks.

Australia’s X Games star Blake ‘Bilko’ Williams – the first Aussie to win a round of the Dew Tour (an action sports tour that travels the US) and the FMX 2009 rider of the year – will be in town for the bash. 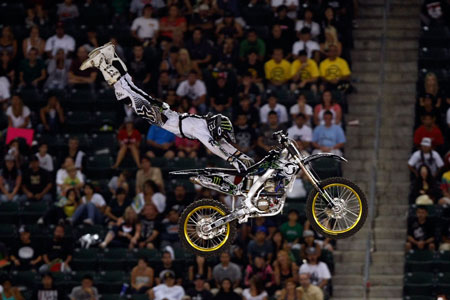 Famed for his FMX spectacle and showmanship, the 26-year old Bilko, who spends half his year Down Under and half in the US, such is the touring life of a pro-rider, is stoked to be returning to the UK.

“I can’t wait to get back,” he says. “It’s been a couple of years. I had a blast the last time I rode here and I’m sure this time will be even better.

“The fans can expect a whole lot of action – when we are all in the air at the same time, wheel-to-wheel, it gets pretty crazy.”
Joining Bilko are a host of other action sports stars, including 27-year old British FMX champion Chris Birch.

“I can’t wait to ride Masters of Dirt, which is such a rad event,” Birch says of his chance to stun a bumper UK crowd.

“And to be in the UK on home soil, you can guarantee I will bring some serious new tricks to the ramps.”

He’ll be joined by fellow Brit Sam Reynolds, a 20-year-old mountain bike champ just as enthused to get the chance to show off his skills before a home crowd as he is in front of some of the world’s finest freestylers. Riders for this all-star event are drawn from all over the world for what is a truly global show.

American Jon Gutter will rock up with some serious quad-bike skills, the Czech Republic’s Tomas Barta leads the mini-bike charge, and Norway’s Jostein Stenberg brings the snowmobile talent to the show, proving that there’s no machine that man can’t train to go above and beyond the call of duty.

Masters of Dirt takes it to the max. So whether you’re a petrol-head or auto-motive newbie, this daredevil show has something for all.

Lord’s finest: 10 of the best cricket moments ahead of this week’s second Test