It should be his last day in the NHS psychiatric hospital where he’s been diagnosed with “borderline personality disorder” after an incident in Shepherd’s Bush market. He’s desperate to be released, but junior doctor Bruce (an increasingly distraught Luke Norris) isn’t sure he’s well enough to go, despite the pressure on space and funds. 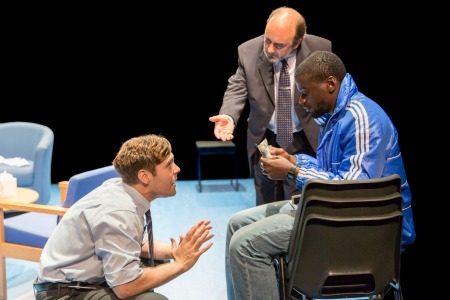 On the other hand, senior consultant Robert, his boss, (David Haig, his initial bonhomie erupting into an angry tirade) insists that he’s fine and would face a better future back in the community – even though he has no support, no family and is convinced that his father is Idi Amin.  Both these white professionals have their own respective career axes to grind and Christopher (who is, crucially, black) becomes a pawn – possibly a schizophrenic one – in an unequal struggle which doesn’t necessarily prioritise what’s best for the patient.

Excellent performances, snappy dialogue and an in-the-round design to reflect changing sympathies all contribute to make this a not-to-be missed three hander in which it’s not just Christopher – destined, either way to be let down my the mental health services –  who sometimes seems to be in need of medication to control his emotions.