10 incredible scenic journeys across the UK

Drive ‘Britain’s Best Drive’ through the Lake District
Re-opened this month following damage caused by Storm Desmond, the A591 ‘Britain’s best drive’, stretching between Kendal and Keswick in Cumbria, is home to some of the world’s most jaw-dropping scenery. Those making the 45 minute journey are rewarded by no fewer than five dramatic Lakes, dozens of world famous mountains and some of the most idyllic places in the world. This drive ranks so highly because of the impressive views of five lakes – Windermere, Rydal, Grasmere, Thirlmere and Derwentwater – which can all be seen from the road and the magnificent mountain scenery including the Langdale Pikes, Helm Crag and the glacial valley of St John’s in the Vale. Capture your OMGB moment at Rydal, a great stop for photos and some of the best views from The Lion and the Lamb mountain from Grasmere.
www.visitcumbria.com

All aboard the Hogwarts Express 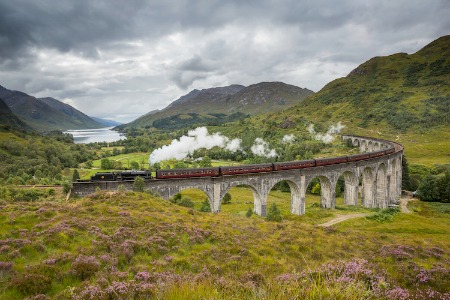 Take on the South West Coast Path National Trail
Originally created by coastguards who would patrol the south west peninsula looking out for smugglers. 630 miles of superb coastline makes up the longest National Trail in the UK, with beautiful views across cities like Portsmouth, Dorset harbour, awe-inspiring rocky outcroppings rising from the ocean, and shining, golden beaches.  With inspiring scenery and geology, you can take a relaxing stroll to get back in touch with nature, or challenge yourself to hike the entire 630 miles from Somerset’s Minehead to Dorset’s Poole Harbour.
www.visitengland.com/experience/take-south-west-coast-path-national-trail

Sea kayaking in the Lake District
Hang up your hiking boots and take to the water to discover the coast from a different perspective. Travelling from Boggle Hole to Ravenscar, visitors have the chance to spot seals on the rocks and sea birds gliding over the waves, as well as enjoy a spot of lunchtime rock pooling. Prices £40 per person. All levels welcome. For information call 0844 249 1895 or visit http://www.nationaltrust.org.uk/events/44261145-8792-4477-8092-1e56315cf464/pages/details

Go the ‘Super Slow Way’ and celebrate the 200th anniversary of the Leeds and Liverpool Canal
England and Wales are home to 2,000 miles of canals and rivers, flowing through vibrant countryside and bustling cities, making them an ideal way to soak up the surroundings at a slower pace of life. 2016 sees the Leeds and Liverpool canal, the longest in Britain at 127 miles, celebrate its 200th anniversary with a series of events making it the perfect time to explore this unique waterway. The anniversary year will culminate in October 2016, with the awarding-winning, heritage education boat, Kennet re-creating the first complete trans-Pennine journey along the canal by the merchants of Yorkshire and Lancashire 200 years ago.
www.canalrivertrust.org.uk

Cross the viaduct on the iconic Settle-Carlisle Railway 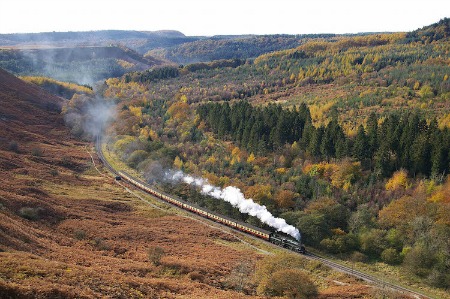 Opened in 1876, the iconic railway spans 73 miles of beautiful landscapes between North Yorkshire and Cumbria. The line and its 11 stops have been designated a conservation area, with a host of wow factor moments, from the Ribblehead viaduct, an #OMGB moment if ever there was one, to Dent, England’s highest mainline station, 1,150 feet above sea level and providing spectacular views of Dentdale. The journey takes just over 2 hours and costs from £21 one-way.
www.settle-carlisle.co.uk

Hike through history on the Hadrian’s Wall
The scenic stretch of Hadrian’s Wall from Housesteads Roman Fort to Steel Rigg provides a journey through history and breath-taking views of the Tyne Valley from the highest remains of the Wall atop the volcanic Whin Sill rock. Be sure to stop at Sycamore Gap, the solitary tree immortalised in the 1991 Kevin Costner film ‘Robin Hood: Prince of Thieves’.
www.hadrianswallcountry.co.uk/walking/walking-routes 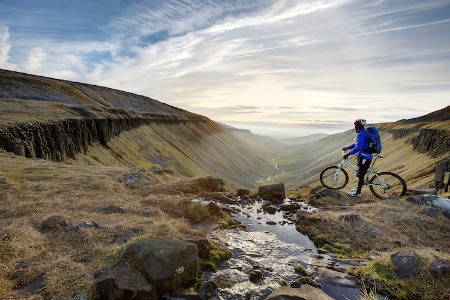 This 190 mile cycle route takes in some of the most scenic landscapes across Cumbria and the Yorkshire Dales. The on-road route is a significantly revised and revitalised version of the former Cumbria Cycleway, which was opened in 1980 but, over the next 15 years, became too busy with traffic to be actively promoted as a recreational cycleway. The new Lakes and Dales Loop uses quieter lanes, following the boundary of the Lake District National Park on its north, west and south sides. It then completes the loop by linking the Lune and Eden Valleys to the east.
www.lakesdalesloop.co.uk

Walk the Walk in Wales
Spanning186 miles, passing 58 beaches and 14 harbours, Wales’ first national trail, the Pembrokeshire Coast Path offers the chance to undertake an epic journey. Luckily, there are no rules saying you have to complete all in one go (which would take around two weeks) and the route offers some fantastic routes, perfect for a more relaxed journey. For families, the five mile Stackpole head circuit is a great choice, passing the pretty harbour at Stackpole Quay, beautiful Barafundle Bay and Broad Haven beach, plus Bosherston lily ponds, which come to life in June as an unexpected bonus.
www.pembrokeshirecoast.org.uk

Ride through England’s ‘Grand Canyon’ on the world’s most popular heritage railway
Take a steam train ride on the North Yorkshire Moors Railway, the world’s most popular heritage railway travelling through the ‘Grand Canyon’ of Newtondale, the heart of the North York Moors National Park, a perfect place to start a walking or cycling adventure and spot some magnificent wildlife
www.northyorkmoors.org.uk/visiting/see-and-do/attractions/north-yorkshire-moors-railway

Pamplona – Running of the bulls