It’s a simple enough story (best known from the 1968 film with Barbra Streisand who had previously starred in the original stage play, here revised by Harvey Fierstein) which completely ignores husband no1 and stops before husband no3 appears on the scene, focussing instead on Fanny’s rise to fame and marriage to card-sharp and shady entrepreneur Nick Arnstein who spent a good part of their relationship locked up in jail.

Told in flashback as Fanny waits for Darius Campbell’s tall, dark and dashing Arnstein on his release, it’s a tale of a short, Jewish girl with unconventional looks who was determined to make it in showbiz  and became a successful Ziegfeld Follies comedy star. 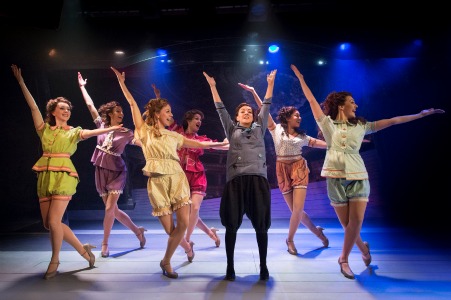 Lynne Page’s sharply executed choreography cries out for the larger stage for which it’s destined, and there’s likeable support from Joel Montague as Fanny’s loyal friend and dance teacher and Marilyn Cutts as her poker playing mother. But this is Smith’s show – from tubby teen to lovestruck young woman and beyond, her Fanny is vulnerable when off stage and confident when on it, with a cheeky, wisecracking  mischievousness which gives way to real emotion in “People” and “Don’t Rain On My Parade.” It’s a performance which surely puts her in the running for yet another award to add to her well-deserved collection.

then from 9th April