Bunk beds collapse, Nana the sheep dog (no, not a real one – but co-creator Henry Lewis in a big furry onesie) gets stuck in the dog flap, the pirate’s boat is as seaworthy as a seesaw and Peter Pan himself is more likely to fly headfirst into the scenery than to Neverland. It’s all part of the crazy fun dished up by Mischief Theatre’s Lewis, Henry Shields and Jonathan Sayer  as the fictional Cornley Polytechnic Drama Society gets down to accident-prone business. 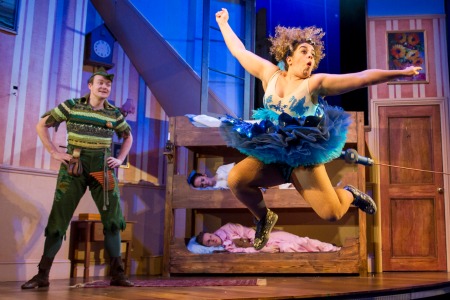 Sayer’s Dennis can’t remember his lines as John Darling so delivers everything – and I mean everything – he hears through headphones in an intentionally monotonous drone, whilst Shields’ Chris doubles as Mr Darling and Captain Hook whose metal prosthesis gets him into all sorts of tangles. Meanwhile Nancy Wallinger’s Annie plays Mrs Darling and the maid almost simultaneously before tackling the role of a stroppy, electrocuted Tinkerbell. And Dave Hearn’s talentless Max (whose uncle is financing the whole enterprise) exchanges his pink babygrow for a green crocodile costume to become the hero of the hour.

And through it all Tom Edden’s narrator valiantly sprinkles glitter as he battles with a recalcitrant sliding chair in this expertly timed mix of the predictable and the totally unexpected – a great evening for anyone who, like Peter himself,  doesn’t really want to grow up.