and no sooner has his King Charles III finished its run when he’s back at the Almeida with a short, unsettling piece which points an accusing finger at a society where homes are in short supply and people get their kicks watching the lives of others. 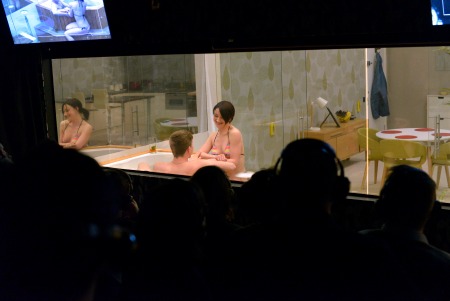 Though under an hour long, it still makes considerable demands on the audience. We’re divided into four groups before entering the auditorium to be confronted by an unrecognisable stage. Gone are the usual bare brick walls, replaced by a pristine, sealed-off apartment in the style of Big Brother. But instead of watching at home from the comfort of our sofas, we’re issued with headphones and seated in enclosed, camouflaged zones where TV monitors display both the interior  and – and this is where it gets really uncomfortable – the various customers who have paid their pounds to turn the world of video games into reality. 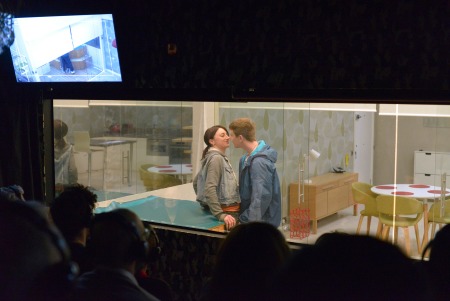 It would be a shame to give too much away. So suffice to say that Jodie McNee and Mike Noble give unselfconsciously natural performances as the targeted young couple who (initially, at least) can’t believe their luck in finding a home where they can start a family. And Kevin Harvey’s ex-soldier, quelling his conscience in order to hold on to a job he needs, is an uneasy overseer of the thrill-seeking punters in Sacha Wares’ skilful production which turns us all into complicit voyeurs.  Go see.