The oldest of boozy Hobson’s three daughters, she may not have the looks but she’s definitely got the brains and when she spots an opportunity (probably her last chance) to not only find herself a spouse but also set up in business independently,  she’s not slow in taking it, using the same persuasive techniques that make her a star saleswoman to convince Bryan Dick’s reluctant  Willie Mossop (her father’s barely literate but highly skilled bootmaker) to become her husband even though he’s already spoken for.

Naomi Frederick is a determined Maggie, towering over her meek betrothed and giving her no-nonsense orders to both her prettier, spirited younger sisters and the men they would like to marry – if only their stingy father would give them a dowry. Whilst her siblings have found love, Maggie initially sees Mossop as a “business opportunity in the shape of a man.” But although she’ll turn any proposition to her advantage, it’s invariably done with an underlying sense of responsibility. 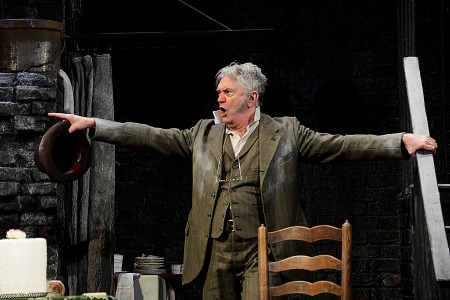 An always watchable Martin Shaw – all red-face, big-belly and bluster – deliberately commands little affection as the widowed Hobson, too fond of the pub which keeps him away from his “uppish” daughters but still fully aware of Maggie’s crucial (but unpaid) contribution to his business. And when he’s finally forced, Lear-like, to realise that, ultimately, he really hasn’t any choice at all, it’s Maggie and her almost unrecognisable Willie who deserve – and get – our sympathetic approval.

Columns fit for a Lawyer

Want to Buy Your First Property in London? Here’s What To Do