The Channel Islands are home to one of the biggest tidal ranges in the world so, with strong local support, Laura had to plan her endeavours very carefully. With water temperatures of 12 degrees, strong tides and jelly fish lurking in the water, the swim around Sark on Saturday 11 June was a brutal start to the weekend. Being relatively new to swimming, Laura confessed that she really struggled towards the end of the 4 mile swim – when salt water intake had induced nausea and made it difficult to consume further calories.

The paddle around Guernsey began at 7am the next day, when Laura was faced with severe weather warnings and a blaring fog horn punctuating the morning. Kayaking through high winds and thick fog until progress and safety were both compromised, she was forced to return to land and complete a half marathon in the process of finishing the rest of the Guernsey circumnavigation on foot. Eventually finishing 12 hours after first setting off from Portelet Bay, the day’s total mileage was 31.

The final challenge, a cycle around the largest of the Channel Islands, Jersey, saw a group of local cyclists turn out to support Laura. Once again battling against the weather, the group rode through heavy fog and rain to finish the round Jersey ride at 7pm on Monday 13 June. 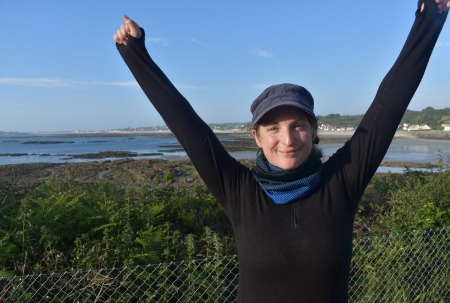 Laura’s previous adventures include kayaking in Russia and cycling the west coast of Ireland. The choice of the Channel Islands for this particular challenge was partly because of their accessibility to London. “I’m keen to encourage others to get outside and take on their own challenges. Adventure weekends can be a fantastic way of seeing somewhere new and we are all capable of much more than we think.”

Did UFO land in Loch Ness?