Yup, that’s the striking combination in director Joe Hill-Gibbins’ swift, trimmed down account of this so-called “problem” play which, in various forms, seems to be cropping up all over the place at the moment – the Globe’s outdoor production has just come to the end of its run and a musical version takes up residence in the tiny Jermyn Street theatre next month.

Vienna has become a morally corrupt, licentious city, and after almost two decades of  leniency, the Duke (Zubin Varla) pretends that he’s absent on diplomatic business, assumes the guise of a lowly friar and hands over control to his deputy, Paul Ready’s prissy, apparently morally correct Angelo who strictly enforces every possible rule. Yet not only is his own previous behaviour somewhat reprehensible, but almost immediately he abuses the power he now holds, forcing novice nun Isabella to make a choice between preserving her chastity or giving in to his sexual demands and thus save the life of her brother who has been condemned to death for impregnating his girlfriend. 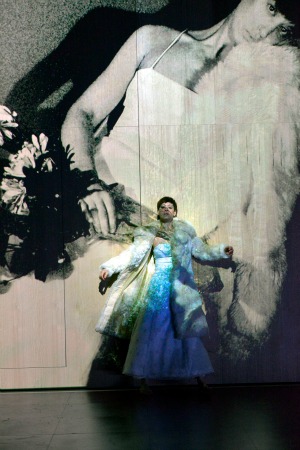 Romola Garai’s impassioned Isabella, in dowdy garb and with hidden hair, values her purity above the life of her sibling. In Shakespeare’s  decidedly unpleasant scenario (in which the substitution of both decapitated heads and living women ensure that justice is done) she makes an effectively stark contrast to the deliberate excesses of Miriam Buether’s set with its hard to forget, blatantly sexual, mounds of plastic bodies.

Burlington Arcade, London – things to do in the capital