Young Konstantin gets in a thorough strop – and with good reason – in Torben Betts’ sharp new version of Chekhov’s masterpiece which brings the language of this 120 year old classic bang up to date. The aspiring playwright has to contend not only with an attention-seeking actress, Arkadina, for a mother but also with his beloved Nina’s infatuation with the older woman’s novelist lover. 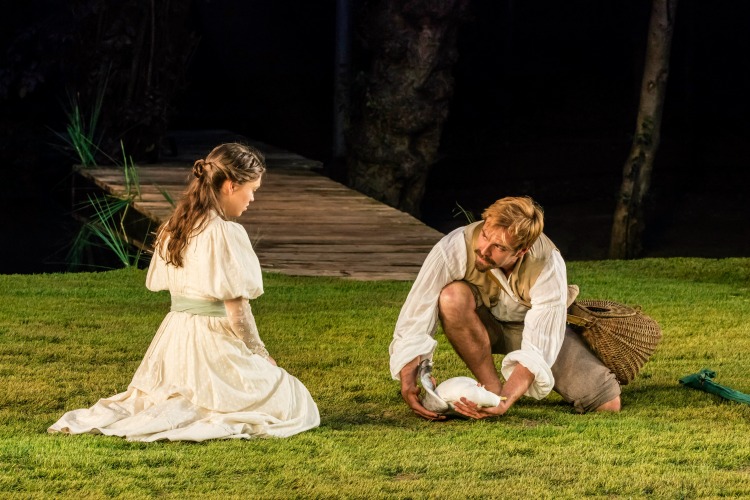 Jon Bausor’s set looks gorgeous – a vast tilted mirror reflecting the grassy stage, revealing what is going on behind the scenes as Konstantin prepares to unveil what he believes to be his ground-breaking play for the first time. A couple of servants go skinny dipping in the lake and – an unscripted intrusion this – a wood pigeon took an unscheduled walk towards the audience, as though to inspect the inert seagull lying centre stage. You can never tell quite what might happen in this open air venue where, as night draws in, there’s often a touch of magic in the air. But although there’s a tragic darkness to this drama of unfulfilled and unreciprocated love, director Matthew Dunster also maximises the laughs that come before – especially courtesy of the besotted school teacher whose life is ruled as much by constant whingeing about the unfairness of his financial situation as by his unrequited love for the intensely miserable Masha (who, in turn, hankers after Matthew Tennyson’s moody Konstantin). And Janie Dee’s reluctantly ageing Arkadina (a supremely self-obsessed character among a host of self-absorbed others) skilfully manipulates those around her to ensure that she always gets her way.

Joshua defends his title in London