Theatre Review: Things I Know to be True

Bob and Fran’s four children have – more or less – flown the nest, though younger son Mark (who’s making money in the financial services) still thinks, in his late twenties, that it’s okay to drop off his laundry for mum to wash, and, at 19, Rosie (the youngest by a long way and not quite an afterthought) still comes running back home when a brief affair on her European travels leaves her broken-hearted. Early thirties son Mark (Matthew Barker) has just split from his long-term girlfriend and married daughter Pip (Natalie Casey), a couple of years his senior and with kids of her own, is unhappy in a way which Fran recognises only too well. 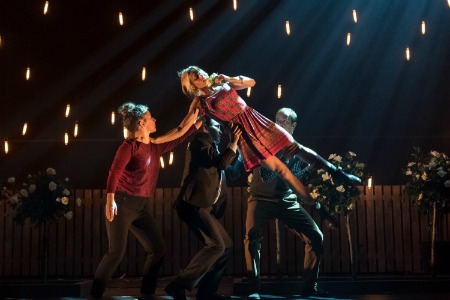 There’s a lovely, carefully observed naturalness to the interfamilial interactions which are interspersed with stylised movement, lit by a host of bare overhead light bulbs and accompanied by Nils Frahm’s gentle music. And at the centre is the convincingly drawn relationship between Imogen Stubbs’ strong-minded Fran and Ewan Stewart’s devoted Bob who both love their kids fiercely and think, as parents usually do, that they always know what’s best for them. Go see.