If Hunter S Thompson had grown up in green and gold, rather than stars and stripes, he would have gone to the Gold Coast, not Las Vegas, in search of fear and loathing. Indeed, if Vegas is home to the American Dream, then the GC’s main hub Surfers Paradise is surely where its Australian cousin resides – living it up in one long beach party, seething with energy. Indeed, Surfers is dedicated to partying in a way that nowhere else Down Under can match.

The beautiful, the depraved, the downright outrageous… this is where they meet. But it’s a place that likes far more than simply boozing and body watching – it’s the undisputed home of the Australian theme park, with pretty much all of the country’s best rollercoasters and log flumes located within a few kilometres of each other. And there’s also no shortage of other thrills to be had, as we found out… 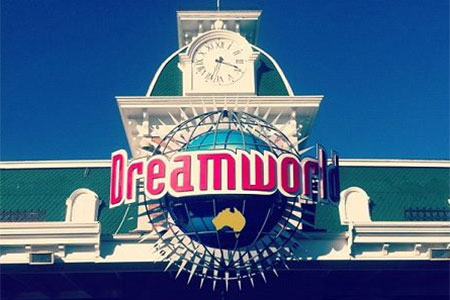 Dreamworld The experience: Sweat was beading up on my forehead, and we’d only just arrived. It was hot, yes, but I couldn’t blame the weather for this sudden overactive outburst of my glands. We were at the start of our theme park extravaganza weekend, kicking it off at Dreamworld, where they’ve got some of Australia’s scariest white-knuckle rides.

Stopping to study my park map, the sound of a fighter jet suddenly ripped through the air. I looked up, only to discover it wasn’t a jet at all, but a ride rocketing past at breakneck speed, shooting towards the top of a 39-storey tower. The screams of passengers followed in its wake. Sweet.

I’d found my first ride of the day – the Tower of Terror. The actual ride only lasted seven seconds, but it went out with a bang. Blasting us up a steep ramp at 160km/hr, the G-forces kicked into gear, forcing me heavily into my seat before I even knew what was going on. And yes, I was a screamer.

We were off to a good start, but there was still the Giant Drop to come. According to the Guinness Book of World Records, it’s the tallest vertical freefall ride in the world, standing at 119m. A group of eight of us were harnessed into our seats as the platform moved to the top of the tower, leaving us to dangle our legs in mid-air.

After keeping us hanging in suspense for many anxious minutes, the stage suddenly gave way without notice, sending us freefalling towards the ground at gut-wrenching speed. If it’s stomach-twisting rides that get you grinning, then The Claw is a must. 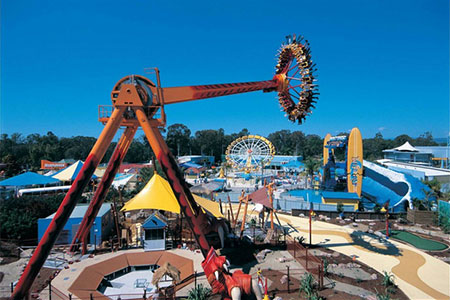 This ride offers the maximum rush, swinging at 64km/hr in spins above the ground. Don’t attempt this one on a hangover – we’re talking insane zero-gravity motions as you perch perilously close to the edge, feeling like you’ll go flying out of your seat. You’re twisting, you’re soaring, you’re being chucked around like a sock in a washing machine… it’s intense. Don’t like high-speed rides? Yawn. Then stay in bed and write Granny a letter.

For the rest of you, have a go on the Cyclone, Dreamworld’s gravity rollercoaster which reaches speeds of up to 85km/hr while zipping around a 360Â° loop and a scream-inducing sidewinder. S’pose we should mention the other stuff too, right? Other than the rides, there’s plenty of other entertainment to fill your day, including Tiger Island, home to rare Bengal tigers, and the Australian Wildlife Experience area, where you can get up close to Aussie critters.

If it’s a hot one – and there’s a pretty good chance it will be – you’ll also want to pop over to the log ride a couple of times. It may not be scary, but the drop at the end will get you pleasantly drenched.

Location: About 20 minutes north of Surfers, off the Pacific Highway, at Coomera.

Cost: General admission is $79.99, but multi-park deals are available. There’s also the waterpark WhiteWater World next door, which costs $49.99.

The best places in the UK to go kite surfing

Five of the best…fried chicken dishes in London