Hazell originally denied killing the 12-year-old and hiding her body in her grandmother’s home, but changed his plea to guilty yesterday after days of grizzly evidence was heard at the Old Bailey.

Mr Justice Nicol told Hazell during sentencing: “Tia was a sparky girl who was full of life but you took that life from her.

“All that lay ahead of her – a career, loves and family of her own – will now never be. And the loss of her has been devastating for her mother, her father and all her relatives and friends.

“The tragedy of their loss and her death is because of your act in murdering Tia Sharp. You are responsible.”

The judge earlier said he had “no doubt” Hazell developed sexual interest in Tia but there was “no pathological evidence” she was sexually assaulted before her death, although “it cannot be discounted”.

“Notable and serious” factors in the case, Mr Justice Nicol said, included the “gross breach of trust” by Hazell due to Tia’s age and the hiding of her body in plastic garbage bags and a sheet last August south London’s New Addington.

No comment was made by Tia’s family as they left the court although there were shouts of “RIP Tia” and “Nowhere near long enough”. 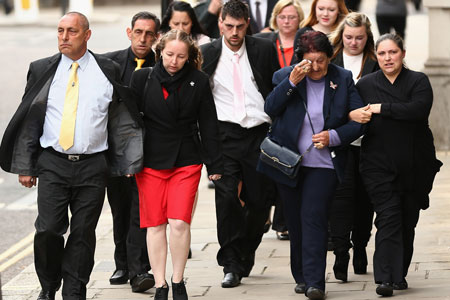 In a witness statement, Tia’s mother Natalie Sharp said: “Sometimes I feel pity. Sometimes I want to hurt him.”

Tia’s father, Steven Carter, previously told reporters outside the court that he wanted him hanged: “In my opinion (a prison sentence) will not be enough.”

The judge descried Hazell’s late decision to change his plea as “very commendable”, but that he’d only be given “the most modest of credit”.

“Your counsel says that you wished to avoid causing further distress to Tia’s family. That is very commendable, but they have had to endure four days of a very public trial,” the judge said.

“It was necessary for the prosecution to lay out for the jury your sexual interest in Tia and for the jury to see the photograph of Tia naked. Your plea of guilty has spared the family none of that.

“It may be the first act of remorse, as your counsel says, but because it comes so late I am afraid it will earn you only the most modest of credit.”

Detective Chief Inspector Nick Scola, of the Metropolitan Police’s Homicide and Serious Crime Command, said: “A minimum of 38 years is satisfying for both the investigating team and Tia’s friends and family.”

Is Ryanair about to say goodbye to yellow interiors?