In what was considered by some to be a highly controversial vote that split David Cameron’s Conservative party, MPs voted 400 to 175 in favour of the Marriage (Same Sex Couples) bill. It put England and Wales firmly on course to join other parts of Europe, the US,Canada, South America and Africa in allowing gay marriage.

Before Tuesday’s free vote, prime minister Cameron said allowing same-sex marriage would “make our society stronger”. He added: “I am a strong believer in marriage.It helps people commit to each other and I think it is right that gay people should be able to get married too.

“This is, yes, about equality. But it is also about making our society stronger. I know there are strong views on both sides of the argument – I accept that. But this is an important step forward for our country.”

Not all his MPs agreed. More than half voted against the proposed law or abstained. And critics have said it was a humiliating blow for Cameron, who had to rely on the Liberal Democrats and Labour to push through the bill, which must now pass the House of Lords before becoming law.Tory MP Matthew Offord said he was concerned about“where the legislation may lead”.

He told the Commons:“The evidence from around the world is that once marriage is redefined with a flexible definition pressure always grows for redefinition.”However, supporters of equal marriage are now calling on Australia’s leaders to follow the UK’s lead and allow same-sex couples to marry.

Alex Greenwich, NSW independent MP and gay rights activist, said the outcome of the British vote was “great news”. He added: “It would be great to see Tony Abbott showing the same leadership on this reform as a Conservative leader. It is embarrassing that Australia now continues to fall behind the rest of the English speaking world when it comes to marriage equality. “I would also say that the vote in the UK proves that civil unions are a failed experiment and that you can’t give equality a different name.” 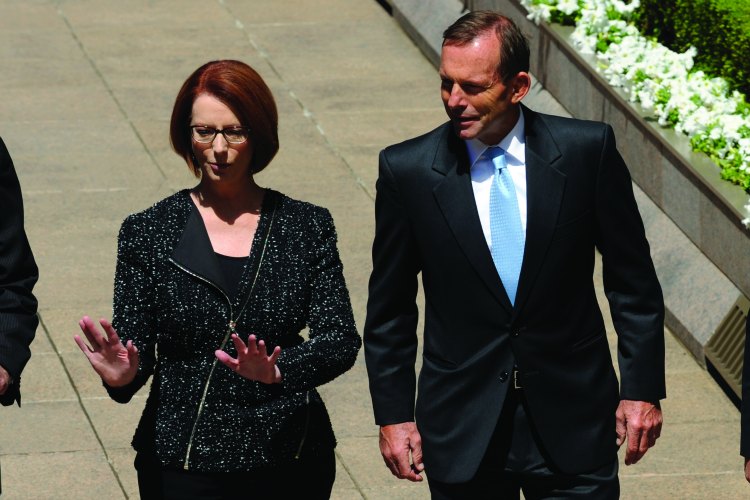 A push for same-sex marriage in Australia was defeated in 2012 when Abbott, opposed to change, refused to allow coalition MPs a conscience vote. Gillard is against gay marriage although her Labor party supports changing the Marriage Act. She allowed caucus a conscience vote.During the Australian debate last year, Liberal senator Cory Bernardi was forced to resign as Abbott’s parliamentary secretary after suggesting same-sex weddings could lead to the legalisation of polygamy and bestiality.

New Zealand is currently considering gay marriage legislation and will report back to parliament on Februrary 28. If passed, it could be legalised by May 2014. Aussie Peter Tatchell, a leading human rights activist based in London, called on Tony Abbott to follow David Cameron’s direction. He said: “If the British Conservatives can support same-sex marriage why can’t Tony Abbott and the Liberals?

“I’m hoping the legislation of gay marriage in Britain will embolden more Australian politicians to take a stand for marriage equality. Discrimination is not an Australian value.”Tatchell called the ban on same-sex marriage the last major legal discrimination against gay people. “It’s profoundly offensive to deny same-sex couples who love each other the option of validating that love through the institution of marriage,” he added. 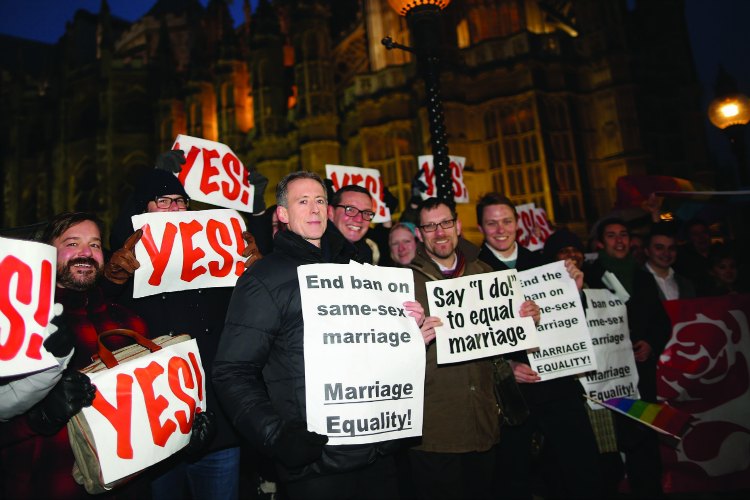 As the vote took place on Tuesday night, many took to Twitter to voice their views. Wallabies flanker David Pocock tweeted his support for same-sex marriage.

“I believe MPs voting for gay people being able to marry is a step forward for our country,” he posted. “Really disappointed in two major (Australian) parties. So important to make Australia more inclusive and move forward. “Not recognising LGBT relationships through legislation engenders homophobia / transphobia.”

Sarah Hanson-Young, Greens Senator for South Australia,posted: “Fabulous news that the Brits will now have #marriageequality. Great leadership from @david_cameron. Long live the Queens of England!”

While actor Stephen Fry said: “Whoop 400-175! Now that’s a majority!! A great day in the slow but glorious history of British progress and fairness.”Critics of the proposed law appeared to be in the minority on social media sites – at least in Australia. Although there were some in Britain. “It is a step backward, an open display of rebellion towards God,” British pastor Josh Williamson tweeted about the vote.

TNT asked its Facebook followers whether they supported same-sex marriage. Beck Farquhar said: “Just wish Australia would catch up to the UK on its equality laws.” Anupam ‘forgottenglory’ Bansoodeb joked: “Gays should have the right to be unhappy like everyone else!” While Rebecca Clarke simply added: “About bloody time!”

Should Australia and New Zealand follow the UK’s lead on gay marriage? Send us your views: letters@tntmultimedia.com

A New Zealand campaigner has come under fire for urging the country’s parliament to introduce new words to describe same-sex marriage.Russell Morrison said there are “already too many words in our language with multiple meanings”,explaining that “sarry” and “sarriage” should be usedto describe same-sex couples. He said it would “make the situation clear for everybody”. Morrison put his proposal to the government administration committee during a hearing on marriage equality legislation.But Australian Marriage Equality’s national convener Rodney Croome said it would alienate gay couples.“What is the point of assigning same-sex couples a different word when ‘marriage’ describes exactly what many same-sex couples already have, a loving,committed, long-term relationship?” Croome said.