When Meg Lanning is on song, the only thing to do is sit back and enjoy the show – or if you’re in the direct vicinity,duck for cover. The Aussie opening batsman is probably the most destructive force in women’s cricket, a rare player who can take the game away from a side before they know it. New Zealand found this out last week when the Victorian smashed 114 runs – 74 of them from boundaries – to put her side in the box seat going into the final rounds.

Lanning, a relative newcomer to the Southern Stars at age 21, has made an immediate impact. Much like her men’steam counterpart, the hard-hitting David Warner, there are more false starts than she’d like, but when it all comes together, it doesn’t get any better. She calls her exciting style of axe-wielding just being “positive”, just like her idol as akid, the recently retired Ricky Ponting.

“He was my hero growing up. He batted at number three,which is where I did,” she says. “It’s was his attacking nature that appealed to me and I carry that on today. I try to be aggressive from the outset and be positive.”It seems appropriate that the first record – of several so far and many to – Lanning broke when she took the international stage was one of Ponting’s.

In her second one-day international in January 2011, against closest rivals England, she scored her maiden century (103 not out) andwith that, at 18 years and 288 days, became Australia’s youngest ever centurian (Ponting was 21 years and 21 days). Lanning’s early ascent to the national team means another Aussie sport lost a potential star – she’s represented Victoria in hockey and gave up the top level when named inthe Stars line-up. 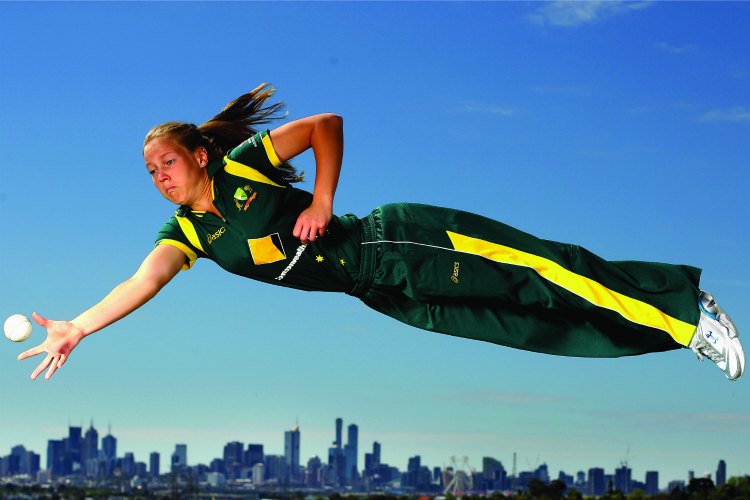 “The decision was kind of made for me,”she says. Did a possible second Ellyse Perry-type career – she plays cricket and football for Australia – go begging? “No,I have no idea how she does it,” Lanning marvels.The faith selectors put in Meg was impressive, considering she made that first international tonne even before she’d made one for Victoria. It was the end of last year that she really made her mark. In the Women’s National League she demolished the ACT Meteors with 174 from 142 balls (a record score in the competition) and eight days later blasted 241 not out off 136 balls for her club Box Hill.“That’s just the way I play,” says the modest swashbuckler.

“Some days it all comes together and some days it doesn’t. It probably doesn’t happen as often as I’d like it to but over the last year or so I’ve worked on building an innings and not getting out. Consistency, I’m working on that.”With such ability to score quickly, which she credits to playing in male teams from her early teens – “I was always intent on justifying my spot in the team” – Lanning is an asset to the Aussie Twenty 20 side. But when they won the recent T20 World Cup title in Sri Lanka, it was in fact consistency washer hallmark – Lanning became the first woman to pass 30runs five times in a row in an international innings.

“T20’s slightly different, you’ve got nothing to lose,” she says. “As an opener you want to get your team off to a flying start and I was pretty happy to contribute to the team. If you can contribute when it really matters it’s really satisfying.”Some moments that really matter are around the corner for Lanning and her Stars mates as they look to capitalise on an impressive start to the World Cup in India, where they’ve enjoyed conditions similar to those in Colombo in which most of them performed so well in the T20 version.“We’re quite used to the conditions,” Lanning says.

“The pitches obviously turn a little bit more but we’re fairly comfortable here. And it certainly gives us confidence thatwe’ve played and been successful here recently.” It helps that she enjoys the travel to exotic locations as well – “I don’tknow that I’d have ever made it to Sri Lanka or India if it wasn’t for cricket, so I consider myself pretty lucky.” 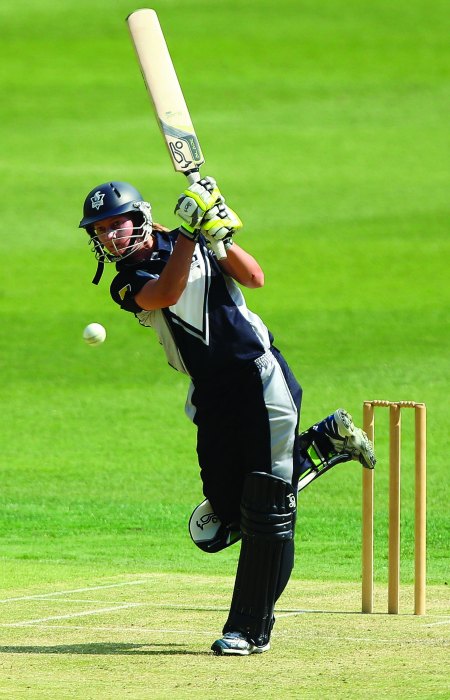 Australia was the only team to go through the group stage undefeated, with easy wins against Pakistan and South Africa. Then what could have been a tough chase of 227 was made look easy by Lanning’s century with 82 in support from Jess Cameron, the batsman she finished second to in last week’s Belinda Clark Medal for Australia’s best player.

They then opened the Super Sixes stage – in which the top three teams in each pool play the teams they haven’t yet faced in the tournament – with a typically tight two-run winover England defending a poor total of 147 runs. Yesterday they played Sri Lanka and on Wednesday they face the West Indies, who Lanning says “are extremely dangerous when they put it all together.”

Australia is odds-on to finish in the top two and play in the final on Sunday at Mumbai’s Brabourne Stadium. When they go into that match, the Southern Stars will be looking for dynamite from their opener with the X-factor. But even though she’s fast becoming a poster girl for the revival of women’s cricket, which it’s fair to say has become a much more marketable product over the past few years, Lanning doesn’t feel too much pressure.“It’s just something that comes naturally to me,” she says of her attacking bent. “I like to keep the game moving all the time. I don’t like to keep things still for too long or I get agitated – I get a bit bored.” You’ve been warned world, don’t let Meg get bored.

The ICC Women’s World Cup final will air Sunday, 8.55am, on Sky Sports 1. Follow the World Cup results at wwc13.com

The New Zealand women’s side were blown away by the explosive Australian pairing of Meg Lanning and Jess Cameron, but they’re well in the hunt for are match in the World Cup final.The White Ferns enjoyed an impressive eight-wicket victory over Sri Lanka on Friday, easily accounting for a miserly 103-run total.They play the West Indies on Monday at Brabourne Stadium, Mumbai, which will host final.

The Windies are also in running for the top two play-off after winning their first Super Sixes game against South Africa. Then, on Wednesday, the White Ferns face England in a match that could decide who the form team of the tournament, Australia, plays on Sunday. With two losses in the tournament, one in the group stage and one to the Aussies, defending champions England have to win both of their remaining matches.

Pirates of the caribbean

Cheryl Cole’s X Factor no vote was set up

Scottish Highlands Getting Around