Any New Zealander with an interest in rugby knows that the name Nicholas Afoa means All Black. During his time with the All Blacks, Afoa helped the ‘Land of the Long White Cloud’ win the Rugby world cup, beating England to the trophy in 2004.

Not so well known is the fact that the former rugby star possesses a voice that could stop traffic. So much so that, after an injury, the 30 year old made the decision to swap sport for the stage.

Nicholas beat off over 400 hundred hopefuls to land the role of Simba in the Australian production of The Lion King in 2013. Fast forward to 2016 and the Kiwi is starring as Simba in London. TNT’s Kaye Holland spoke to the rugby star turned musical theatre leading man, ahead of his West End debut. 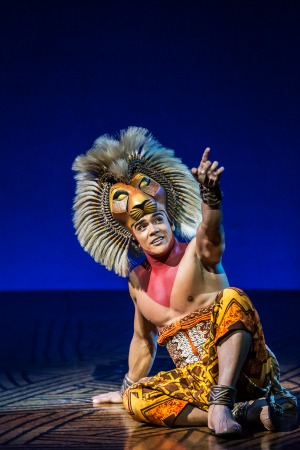 Nicholas Afoa (Simba) in Disney’s The Lion King at the Lyceum Theatre, London. Photo by Disney

Has performing always been your big love?
I’ve always loved performing. From a very young age it was one of my two main passions – the other of course being sport. My parents really encouraged me to work on both skills, however sport moved to the forefront as I began to become more successful in this area and music remained as a hobby. After injuring my knee while playing, I re-discovered my love for performing and decided to pursue a career in music. When I heard about the open auditions for The Lion King, I knew it was a huge opportunity that I couldn’t let pass.

What does working on The Lion King mean to you?
I’m a strong believer in going out there and chasing your dreams, no matter what it is and how long it takes you. Before becoming a part of The Lion King I felt very lost, but this show has given me hope and I love playing Simba every evening. I am so thankful to be part of this show and joining the London cast has been such an awesome experience.

Tell us a little about the similarities and differences between the Australian production of The Lion King (in which you starred as Simba) and the West End production?
The similarities and differences between productions are subtle, but each different cast brings uniqueness and its own original flavour. Being in an Australian cast, many of the company consisted of Maori, Indigenous Australian and Polynesian performers like myself. It was great to have a cast which represented the location. It was so exciting to see our cultures come together and bring life to an African story, as there are so many similarities between Polynesian and African cultures. One difference I’ve noticed in the London production is the variety of crowds you will get. In Australia depending on the city we were in we would generally know what to expect, but in London the crowd response varies from show to show.

What do you miss most about New Zealand?
I definitely miss my family. I had a new born nephew, who was about 3 months old when I left. I’m missing out on all his cute stages! My sister is keeping me up to date with everything via social media though. I am a proud Polynesian who thrives on connection with his people, so I do miss just seeing and hearing Maori and Polynesian languages spoken as well as the humour. Not to mention the food!

Do you ever read reviews?
Yes I do and I’ve learned how to take the good with the bad. From time to time it’s nice to know what kind of effect you have on audiences. 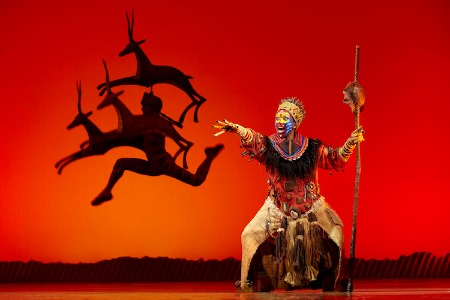 You perform eight shows a week. That’s no part-time job. How do you switch off?
Generally I like to rest, plan a really nice cheat meal to eat (or meals!!) and watch a good movie or documentary. Netflix is awesome: I can get lost scrolling through the hundreds of options!

What has been the proudest moment of your career?
I have been lucky enough to have multiple proud moments so far, but the proudest moment of my career is being the first Samoan on this stage and, I think, in the entire West End. As an ambassador for Polynesians in the industry, I want to promote the importance of breaking stereotypes and entering into new territories.

What was the last show you saw?
Last night my wife and I saw The Curious Incident of The Dog in The Night Time. We really enjoyed it! The show has an amazing cast with a simple but effective set.

Which of the Lion King songs, do you enjoy singing the most?
Endless Night will always have a special place in my heart, but I enjoy them all equally. I feel so lucky to be in a show where each song is great to sing for different reasons and they all personally resonate a lot with me.

How long are you planning on being in the UK?
I am currently here for a year but would love to stay here longer – so it all depends on how much the West End like their new Simba!

Top 8 Free Things to Do in London

The Fat of the Land restaurant review: Mediterranean cuisine in Marylbone, London