TNT’s top seven moments from the 2012 Olympic so far

But alongside such a momentous occasion, there’s always the moments you could never foresee. Below are TNT’s favourite bits from the first week of London 2012 (not including bumbling Boris, who’s best moment is on P6).

You would, of course, forgive Chad Le Clos feeling a bit emotional after winning gold in the 200-metre butterfly final, beating American Michael Phelps by 0.05 seconds.

However, it wasn’t the Olympian who was shedding tears in front of the cameras, but his over-excited father, Bert. Overcome with pride, Bert was interviewed for the BBC by presenter Claire Balding.

Pumping his fist in the air, the South African said: “Unbelievable! Unbelievable! I’ve never been so pleased in my life. It’s something indescribable what happened tonight. He’s unbelievable.

He’s the most down to earth beautiful boy you’ll ever meet in your life. Look at him, he’s crying like me. I love you. Look at him! I love him.” Enough already. Sheesh.

It was always expected that the Australian athletes would swagger into London, full of bravado and confidence, and they haven’t disappointed.

The green and gold army first ‘livened up’ the Opening Ceremony, with team members accused of being “rowdy” and “drunk” as they climbed over barriers and wandered into the centre of the stadium.

But Olympic rower Joshua Booth took it to another level when he was arrested for allegedly damaging a shop front during a drunken night out after his team failed to win a medal (finishing sixth, with Germany taking first).

The 21-year-old also fainted, hitting his head while at a police station. Loving. His. Work. 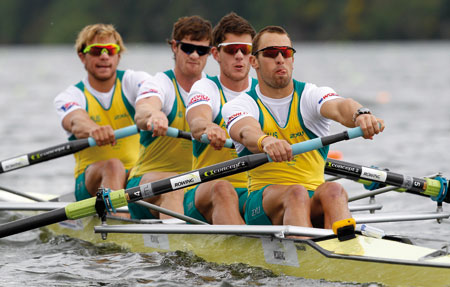 #NBCFail was trending for a number of days on Twitter as the US broadcaster continued to piss off viewers with its second-rate coverage of the Olympic Games.

Not content with making a balls-up of the Opening Ceremony – dropping a tribute to the 7/7 bombing victims because it ‘wasn’t relevant’ to the US audience and, ironically, telling viewers to Google who Tim Berners Lee is – the bosses then decided to keep in-demand content for prime-time TV (running hours after the Americans had learned who’d won what over the interweb).

Lastly, and rubbing salt into an already sore wound, NBC got its countries mixed up on its website, running a description of Austria next to a map of Australia. #doh!

The 16-year-old not only took an incredible five seconds off her own personal best, but also more than a second off the world record.

However, what made those raised eyebrows arch to look like a surprised facelift victim was Shiwen swimming the final 50m of the freestyle leg faster than men’s champion Ryan Lochte.

The Chinese contingent came out in support of Shiwen, saying she had undergone more than 100 drug tests since arriving in London, all of which she had passed.

But it reignited the debate about the Chinese and cheating, which, let’s face it, if proved to have happened at any stage in the Games, wouldn’t come as a massive shock. 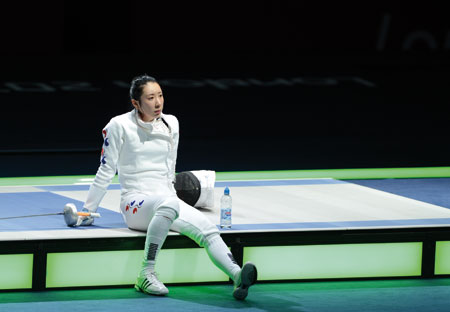 We all like our Olympians to have fighting spirit, determination, an overwhelming desire to succeed. But when those emotions turn to stubbornness, it’s just a bit embarrassing all round.

Poor South Korean fencer Shin Lam didn’t care about that, though, when she broke down in tears and staged a sit-in protest for an hour after one second was put back on the clock during the semi-finals of the women’s fencing.

The extra time allowed Germany’s Britta Heidemann to win 6-5 and make it through to the final. After all that, the 25-year-old was allowed to fight her bronze medal match, but ended up losing that as well.

Rather than follow the Aussies’ raucous lead, the New Zealand athletes seem to be maintaining a low profile while in London, keeping themselves to themselves and being well behaved (thus far).

And it’s paying off. Sticking it to the Aussies where it hurts, the Kiwi women’s hockey team slammed to a 1-0 victory against them. NZ then went up against South Africa, scoring a tremendous 4-1 victory.

Sweet as. (We had to give the Kiwis this moment, as, let’s face it, Aus is caning them when it comes to medals.) 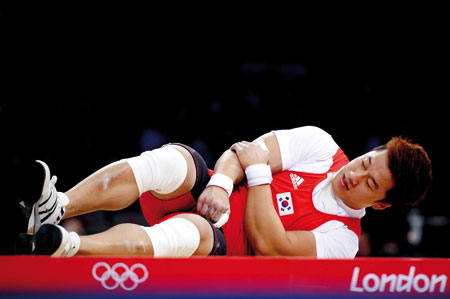 Even athletes have their breaking point. For weightlifter Jaehyouk Sa, that moment was when he tried to push up a 162kg bar and his elbow bent back in the wrong direction, snapping his arm under the weight.

The agony was etched across the South Korean’s face as his right arm gave way while he was in the squatting position. The 27-year-old was forced to drop out of the competition and was taken to hospital.

Log on to tntmagazine.com/weightlifter. But don’t watch it before eating lunch.