A short ferry ride from Perth, Rotto, as it’s called by locals, is home to picture-perfect beaches and turquoise waters.

It’s much loved by Aussies: hundreds of thousands of people visit every year for snorkelling, swimming and a hefty dose of downtime.

And with 63 beaches it is easy to see why – finding a secluded spot isn’t exactly hard. That’s not to say you’ll never be swamped by people, it depends where you go; if you want isolation, the west end of the island is less visited by tourists, but you can expect beauty and nature wherever you go.

First stop for most visitors is the Parker Point/Salmon Bay area, which is a popular spot with families and snorkellers, although a little further along, Little Salmon tempts many into dipping in. Those aren’t the only places: Rotto’s surrounding reefs are littered with shipwrecks which are popular with divers, snorkellers, surfers and fishing types. And of course fish themselves.

If cycling sounds a bit too much like exercise, there is a jump-on, jump-off bus service that runs clockwise around the island.

The best bit? Due to the exclusion of feral pests, this is one of the few areas in the world where the cute and mainly nocturnal quokka (a cat-sized kangaroo/rat/beaver type thing, pictured) can be found.

Formerly known as Pumpkin Island this is just a baby, born when Lion, which owns the XXXX Gold brand, leased the 15-acre property, acquired naming rights and started holding competitions for people to visit.

The ‘mates only island’ is now the ultimate beer paradise for lucky winners and three buddies, with “everything you could hope for” given free during your stay. Bonza.

Victoria’s Phillip Island is best known for two reasons: its racetrack that plays host to a leg of the international MotoGP every year, and the little penguin parade.

While the MotoGP is a big draw, most people come for its bountiful beaches and, of course, the penguins – the daily parade is an adorable sight, watching them waddle up the sand of Summerland Beach to their roost. 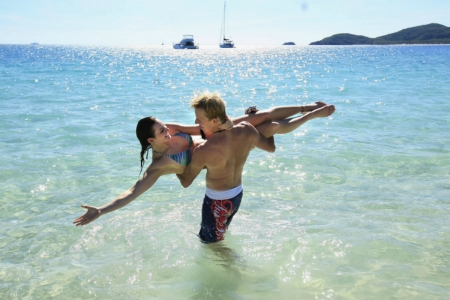 Okay, we’ve cheated a bit here – we couldn’t choose one island above the others, so we’ve included all 74.

Famous for Whitheaven Beach (on Whitsunday Island), most of the islands are sandy with tropical rainforest and several accommodation options, ranging from five-star resorts to basic camp grounds. We’ve little space here, so turn to p38 for the lowdown on Airlie, one of the favourites.

If it was not up against such steep competition, the unique Fraser Island would for sure be further up the list.

Fifth place doesn’t seem to do this extraordinary island justice, what with it being the world’s largest sand island, with subtropical rainforests stubbornly thriving in a seemingly infertile environment. Fraser is also home to more than 40 freshwater dune lakes – over half the world’s known total – and dingos.

Despite not actually being magnetic, unlike the island in the TV series Lost (we still don’t know what the polar bear was about), Maggie, as we like to call her, is absolutely great – party prospects married with park-your-arse and chillax opportunities.

There’s superlative scenery, beaches, wildlife and activities such as diving and snorkelling. Maggie has great wildlife experiences too, with koalas living in the wild and cute little rock wallabies. Base Hostel throws a pretty full-on Full Moon party on Magnetic Island every month and it’s worth being there just for that. 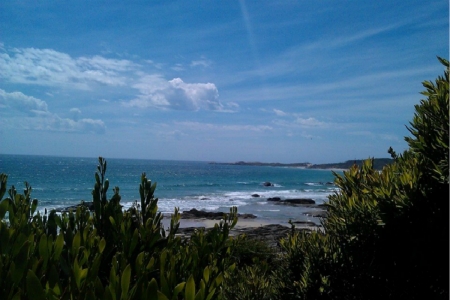 This small island off the north of Tasmania produces some of the best brie and soft cheeses in Australia and, being anchored in the middle of the Bass Strait, it also has some amazing surf.

It’s an island of long, empty beaches and clean, fresh air, offshore reefs, rocky coasts, lighthouses, more than 70 shipwreck sites, award-winning dairy, succulent seafood and some of the world’s best beef (a large percentage of Tasmania’s herd is on the island).

Flat, fertile and uncomplicated, we love it here. It is not a huge place, but leaves a lasting impression.

This is the sort of place you’d go to hide away and write a novel.

It’s an hour from Hobart, but it really does feel like you’re at the end of the world and many miles away from civilisation.

If you’ve been to Sydney you’ll know that Cockatoo Island is the largest island in Sydney Harbour and a cracking place to visit.

Its prisons were added to UNESCO’s World Heritage list in 2010 along with 10 other Australian convict sites. They were recognised as the best surviving examples of large-scale convict transportation and colonial expansion. Worth a look.

Don’t worry Game of Thrones fans, we don’t mean them – we mean the islands we haven’t got room for, such as Tangalooma, Lord Howe, Kangaroo and the Tiwis Islands.

Dublin St Patrick’s Day – The calm before the storm

Metronomy at the Royal Albert Hall