South Australia is often overlooked by travellers who tend to favour New South Wales and the Northern Territory, Queensland and Western Australia. But South Australia, with its unforgettable wine, underground towns, thrilling wildlife and festivals galore, rewards a visit. Here’s the skinny on the top 10 things to see and do in this underrated state.

Adelaide
Of all Australia’s state capitals, Adelaide – voted the most liveable city in Australia on more than one occasion – arguably enjoys the most beautiful of settings. Nestled between the majestic Adelaide Hills on one side and the crystal blue waters of the Gulf St Vincent on the other, few cities can match Adelaide for natural beauty. It is also fast becoming the culinary capital of Australia – lying between some of the country’s best vineyards and pristine natural coastline full of fresh seafood, the level of produce on offer is up there with the best to be found anywhere in the country.

Coober Pedy
Named after the Aboriginal word, which translates roughly to ‘white man’s hole in the ground’ – a fairly apt description as over half of the town’s population live underground – Coober Pedy is Australia’s best-known outback town. The town is also known as the ‘Opal Capital of the World’ a fact represented by one of Coober Pedy’s better known above ground monuments, The Big Winch. Indeed, the identity of the whole town is closely linked to the mining of opals with some of its best known attractions revolving around the mining of these precious stones.

Festival fever
Not for nothing is South Australia known as the ‘Festival State’ with the Adelaide Fringe Festival being one of the biggest in the country. The Fringe’s phenomenal success lies in its openness – both in terms of its acts as well as its venues, which are spread throughout Adelaide’s CBD. The state also offers internationally renowned food and wine and music festivals – the Gourmet Traveller and WOMAdelaide anyone? Then there’s Santos Tour Down Under, a festival of international cycling which also doubles as part of the competitive world tour, and has a huge attendance.

Flinders Ranges
Whether you looking for an adventure or some down time, the Flinders Ranges, which are the largest mountain range in South Australia, have it all. Unwind with a cold drink in hand while staying in one of the luxury eco-villas after a days work on an Outback station or explore the bushwalking tracks spread across the rugged landscape, with the opportunity to engage with the Aboriginal culture by exploring ruins and visiting ghost towns. The most interesting of these is Dawson, about 24km top the north east.

Kangaroo Island
Australia’s third largest island offers a wonderfully picturesque getaway full (as the island’s name suggests) of kangaroos and numerous native flora and fauna.  However it was once considered the most lawless and vicious place in the British Empire. Take the 45 minute ferry from the mainland where you’ll be treated to a huge range of water sports and other aquatic activities for visitors including scuba diving, snorkelling, surfing and fishing.The main town on the island, Kingscote is a good base from which to explore the rest of the island. 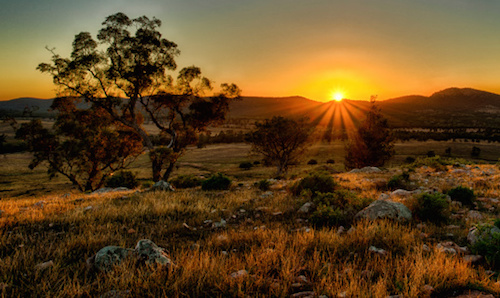 Murray River
Many parts of South Australia’s Murray Basin highlight the river’s once great majesty – one can still ride the steam powered paddleboats, which have cruised up and down the Murray for the best part of two hundred years. The river also provides some great fishing spots where anglers can try and catch the readily abundant schools of European carp. Wakeboarding and water-skiing are popular water activities, or if you’re with a group, renting a houseboat represents an affordable and fun way of exploring the Murray’s winding meanders.

Lake Eyre
Taking a guided tour to Lake Eyre around midday you will experience a true phenomenon – the lake surface can often become very flat. The surface then reflects the sky in a way that leaves both the horizon and water surface virtually impossible to see. While Lake Eyre remains the most famous and best known there are a number of other, similar salt lakes in the surrounding area, including Eyre’s little brother Lake Hart, which is located very conveniently right next to the Stuart Highway. These large, backing salt flats have become something of an Australian outback icon.

Port Lincoln
Located on the South Australian coast, Port Lincoln can be described as a blue water playground for yachting, scuba diving, shark cage diving – check out www.sharkcagediving.com.au – water sports and tuna fishing in particular. Port Lincoln also offers wine tasting tours at local wineries including Boston Bay and Delacolline Estate. For the outdoorsy-type there is Lincoln National Park, where you can engage in activities such as bushwalking, camping and fishing which covers the southern tip of the Eyre Peninsula.

The wine regions
Adelaide Hills, Barossa and Clare Valley- aka South Australia’s wine regions – are known internationally as some of Australia’s best. They are also some of the most varied regions for the production of great grapes including Cabernet Sauvignon, Shiraz, Riesling, Chardonnay and even the odd Sauvignon Blanc. Only a short drive from the capital, The Adelaide Hills are perhaps, the best place to start exploring the region’s wine gems. The Barossa Valley is one of Australia’s oldest wine producing regions while The Clare Valley is one of the smaller wine producing regions.

Yorke Peninsula
If you want to get out of the city in search of sun, sea and sand, the Yorke Peninsula is the place to go. Being just over an hour’s drive from Adelaide, the postcard worthy beaches will take your breath away. With a distinctive 700 km of coastline, it’s easy to find the perfect beach spot and let your worries melt away. The Yorke Peninsula can also brag about having some of Australia’s greatest surfing beaches with many well known surfing and body boarding competitions held over there.

Legend of the East End

Lonely Planet travel expert’s advice on hiking Peru’s Inca Trail: Which local company is the best to go with?