Top 5 weird restaurants around the world: From cat cafes to a toilet-themed food joint

For a surprising amount of others still, it’s fishing around in a toilet bowl. Seriously, we’re not yanking your chain.

At Taiwan’s Modern Toilet Restaurant, the food comes served in miniature bogs, the drinks in urinals (don’t order weak iced tea) and practically every other aspect of the decor is themed around the crapper. Need a napkin? Pull a few sheets off the dunny roll dispenser on the wall. Plungers hang off the ceiling, the light fittings look like giant poos. The seats, naturally, are disused toilets. As for the actual washrooms, you guessed it, you do your business on a plate.

But this eatery is no flash in the pan – the first branch of Modern Toilet opened in Kaohsiung, Taiwan, and was such a success there are now 12 restaurants in Taiwan and Hong Kong, with plans to expand into Macau and Kuala Lumpur, Malaysia.

Wang has been quoted saying he was inspired by a Japanese cartoon with a poo-obsessed character, but to figure out how he made the leap from this to a toilet-themed restaurant is, well, a bit of a strain.

Hotpot, curries, noodle soup and lots of other soggy foodstuffs that look unappealing floating in a toilet bowl are all on offer for your pleasure. But apparently it doesn’t put people off.

One food blogger, writing for mrnaomi.wordpress.com, said the food was good but, “I am not really impressed with the look of the dessert. It’s kind of disgusting like mixed everything in it [sic].” That’s what’s disgusting? That the dessert has too many ingredients? If you say so… 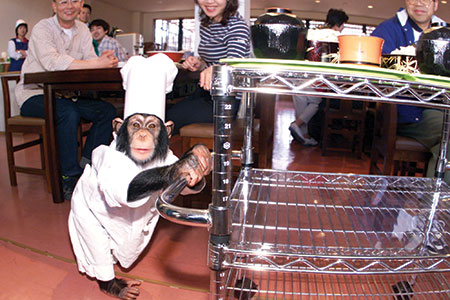 The two macaques at Kayabukiya Tavern serve customers, one bringing drinks to the tables and the other giving guests hot towels. They both get tipped soya beans for their efforts. Due to Japanese animal rights regulations, they are each only allowed to work for two hours a day. 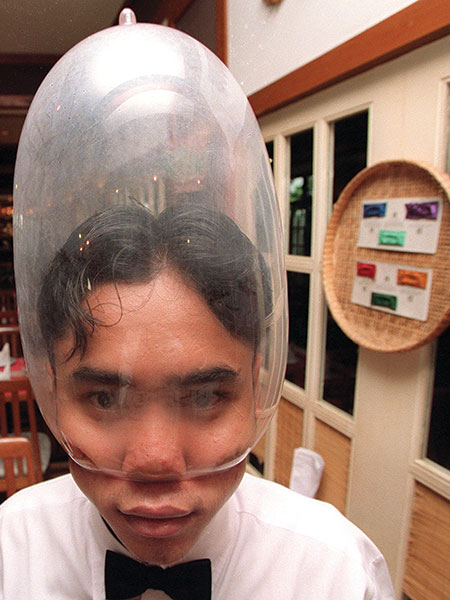 “Our food is guaranteed not to cause pregnancy” is the slogan of popular Bangkok restaurant chain Cabbages And Condoms.As opposed to all that food that does get you up the duff?

Anyway, quibbles aside, this restaurant is all about johnnies, which are displayed on the walls, carpets and as artworks, plus given away free. And yes, that’s an inflated condom on the waiter’s head in the picture above. Ha, what is he like? 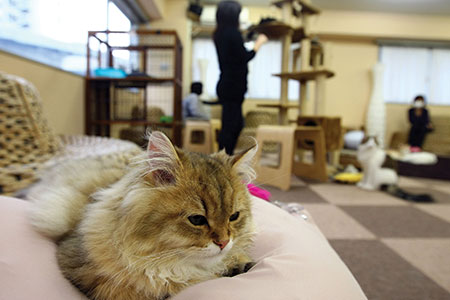 Fancy a little cuddle with your coffee? Try one of Tokyo’s cat cafes, where you pay by the hour to play with soft fluffy critters for as long as you like.

Tokyo has plenty of cat cafes, most likely because most apartments in the city don’t allow pets. Cat Cafe Nekorobi has 12 in-house kitties that love to be petted, as well as books, magazines and games. Can’t afford the plane ticket? Aussie entrepreneur Lauren Pears is hoping to open London’s first cat cafe in summer. 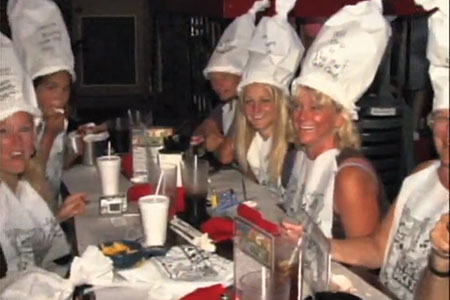 At Dick’s Last Resort, you can expect to be insulted by waiting staff, have napkins thrown in your face and be treated obnoxiously all through the evening. And you’ll damn well like it.

This US bar and restaurant chain thrives on its unique treatment of customers. You’ll be given a big dunce hat to wear with something rude written on it, and can sup drinks called ‘Raspberry Dicksuckle.’ You can even  buy a T-shirt to take home with the slogan: ‘Real Women Love Dick’s’. Nice.

3 Ways to Customize Your Vape Tank