Why? Because, just like its backpacker clientele, Hostival is a nomad with an insatiable appetite for the world’s biggest and best festivals, and follows them around the globe.

The mobile hostel sets up at bucket-list events for the duration of the party, then packs up and heads off to the next fest.

And no, this isn’t just a fancy way of saying ‘campsite’ – guests stay in 12-bed dorms (admittedly under canvas), and there’s free wifi and a 24-hour reception desk.

However, the folks at Hostival are keen to point out that their temporary party digs are not five-star establishments with ensuites. Nor are they suited to “a romantic, quiet weekend away with the missus”.

“It’s basic,” the Hostival masterminds concede. “Bed. Toilet. Shower. What else do you need?”

Well, quite. It’s true that travellers spending their days chugging sangria in the streets of Pamplona or lighting the flames at Las Fallas are hardly in need of silk sheets at the end of the night.

Hostival is a place to meet like-minded party animals and crash land when the adrenaline gives out.

There are no butlers or chocolates on the pillow. But what this pop-up hostel can promise is fun, fun and more fun.

With that in mind, anyone hoping for a good night’s sleep is best off booking a B&B as far away from Hostival as they can possible retreat.

This is the stuff of organised pub crawls and club nights, set close to the centre of the action (never more than 15 minutes from the festivities, they promise). It’s capable of cramming in up to 500 up-for-it festival-hoppers a night.

And at European fests, there’s a ‘Hangover Hospital’ theme, with staff dressed as saucy doctors and nurses.

Anyone looking to feel warm and fuzzy about their stay long after the booze has worn off can delight in Hostival’s claim that all furniture – newly procured before each pop-up – is donated to charity after the events. 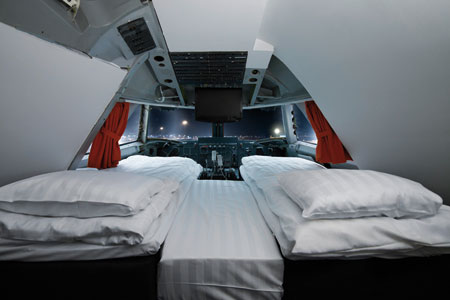 We love a silly gimmick here at TNT, which is why the chance to sleep in dorms on a converted 747-200 jumbo jet has us giddily gagging to spend a night in the cockpit.

Just 10 minutes from the check-in counters at Stockholm’s Arlanda Airport, two- and four-bed dorms have been squeezed into every available corner of the craft, with a luxury suite on the flight deck offering a surreal view over the airport. 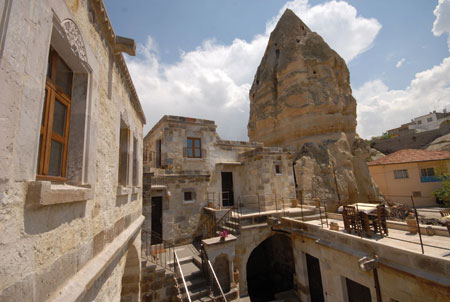 In the otherworldly town of Göreme, in the middle of Cappadocia’s fairy chimney rock formations, this hostel blends into the surroundings with its stone walls and cave-like arched rooms.

You’ll feel like you’re staying in one of Cappadocia’s underground grottos in this unique arrangement, although there’s a sun-drenched roof terrace on which to enjoy your traditional Turkish breakfast if things get too gloomy.

Hiking tours can also be arranged. 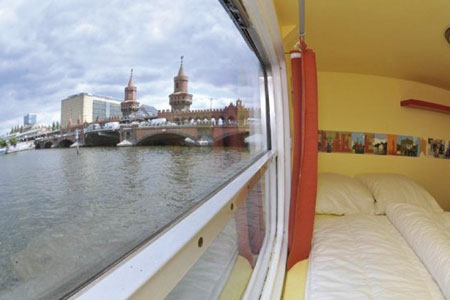 Climb aboard this hostelboat for a few nights on the river Spree. There are 25 cabins set over three decks, ranging from private doubles to six-bed dorms. For the ultra-frugal, you can bring your own tent and camp on deck.

The boat is moored close to the East Side Gallery, a stretch of the fallen Berlin Wall that has been painted with works by artists from all over the world.

The bobbing backpacker den is also close to Kreuzberg, the capital of cool’s most happening district. 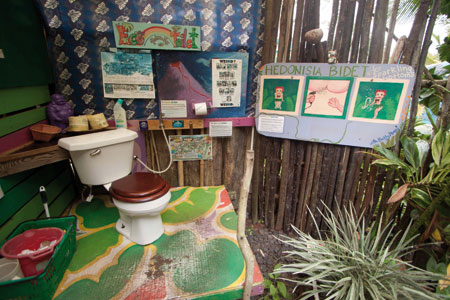 This hippy-esque hostel in a volcanic rainforest invites guests to stay in an array of tents set on platforms or in barns. If you’re feeling flush, you can even stay in a campervan hidden in a grove of native Ohi’a trees.

Hedonisia also offers one of the most scenic toilet experiences a backpacker is ever likely to enjoy, with its open-air eco-loo set in a private tropical garden.

There are also outdoor ‘pee gardens’ without toilets – apparently a number of tropical plants “love to be peed on”.

Travelling on: We take the long way home – on the Trans-Siberian railway

The best cycling routes of the Loire Valley