The 28-year-old British actor, who shot to fame in Facebook film The Social Network, plays the superhero in new blockbuster The Amazing Spider-Man.

But he’s told the Radio Times that he dreamt of returning to “simpler times” of “struggling … auditioning and getting turned down (and) wondering if I’m ever going to get another job.”

Garfield said that he had “lost a bit of innocence” thanks to his high-profile Spider-Man role.

“To achieve what you set out to achieve and realise it’s not what you want, it’s disappointing,” he said.

“This role had been something I’d always, always wanted to do. Then you realise it’s like any other acting job.

“Some days it’s great, others you feel lost. And I’d always felt that if I got certain roles then I’d be set for life, emotionally, professionally. It would be Utopia.

“But you never get to Utopia,” he said, adding: “The dream has become reality.” 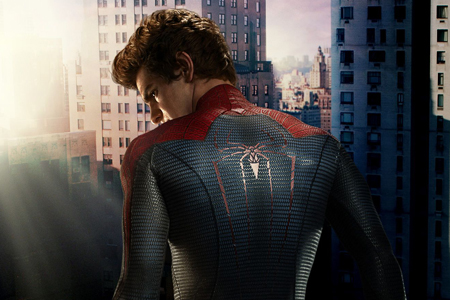 Garfield, who in the past has admitted buying pirate copies of previous Spider-Man films because he was so desperate to see them before they hit the cinema, said that producers now handed him roles as a short-cut to get their movies made.

“It seems flattering but it isn’t. It’s like: ‘Are you kidding me? I can’t actually play a 50-year-old black, male prostitute'”, he said.

“I wasn’t offered that … but it’s scary, being treated so nicely. Maybe it’s seductive if you believe in it. I don’t, I see it for what it is.”

“It’s a horrible time of your life. But I still feel like I’m in that chapter. I’m unsure, insecure, awkward in my body,” he said.

“I definitely haven’t shed that skin. I still feel like I am my past.”

The star, whose father is American and mother is from Essex, said: “I used to be very competitive. Now I’m not sure there’s any such thing as winning.”

Breast interview ever: Journalist exposes her breasts to mayor