The England tailenders fell rapidly in the morning session to be all out for 251, pushing their hopes of a fightback out of reach.

Bell (15), Stokes (18) Prior (8) Broad (5), Bresnan (21) and Anderson (2) all succumbed to a spirited display from Aussie quicks Harris, Johnson and Siddle, who shared the joy around with two wickets apiece.

Then the Australian openers combined for a demoralising partnership of 157, until Rogers brought up his half century before being caught by Carberry off the bowling of Bresnan for 54.

Warner’s century followed, his second for the series in trademark good time before he was caught by Stokes while attempting to smash Graeme Swann into the Swan River for an outstanding 112 off 140 balls. 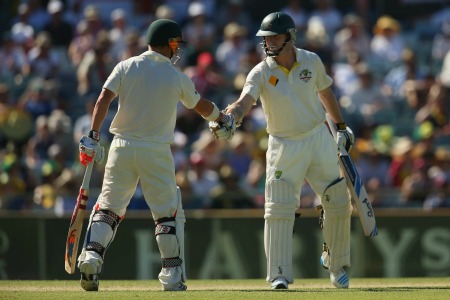 Clarke (23) made a brief second innings appearance before being bowled late in the day by Stokes, but the damage was already done.

England wilted in the afternoon heat as Cook and Prior failed to capitalise on catching and stumping opportunities.

As if matters could get worse for England, Broad was noticeably absent in the afternoon session after being taken for X-rays on a foot injury courtesy of a Johnson yorker just before lunch.

Australia are now in complete control leading into day four with Watson (29no) and Smith (5no) remaining at the crease for another potential flurry before England face the firing squad again and try to save the match and the series.