Transylvania, Romania: Dracula and beyond

My trip begins in Brasov, the gateway to Transylvania, a four-and-a-half hour train ride from Romanian capital Bucharest. The name ‘Brasov’ stands in 9m high letters above the city, like a Saxon-styled Hollywood. It’s the most popular tourist destination in the region, thanks to its well-preserved architecture and proximity to Bran Castle.

One of the most popular attractions in Romania, the gothic Bran Castle, often billed as ‘Dracula’s Castle’, has never really had any real connections to the blood sucking count. However, the gothic castle’s turreted precipice would look foreboding on a stormy night.

Book a tour of Romania

The castle has a higgledy-piggledy maze of rooms more akin to a Cinderella’s fairytale palace than a vampire’s lair, but if you want to stock up on Dracula memorabilia, Bran is the place to buy vampire fridge magnets, mugs, T-shirts – and local liquor.

Transylvania’s mountains and forests are home to more bears than anywhere in Europe, so we head to the Brasov suburb of Racadau at dusk to try to catch sight of the animals as part of a trip organised by the Rolling Stone Hostel. We park adjacent to a thick tangle of untamed forest and it’s surprising to see people hanging out in groups eating snacks while waiting for the bears to come. Surely the mix of hungry bears and a packet of crisps is not a sensible idea?

At about 9.30pm, a few brown bears slope out of the forest and start to rake around the wheelie bins for food. It’s amazing to see them so close. 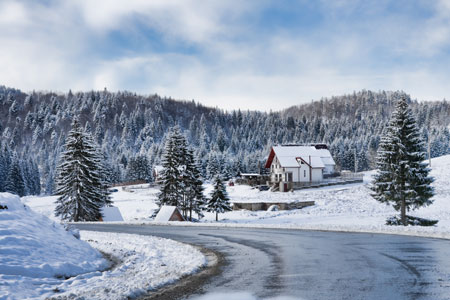 Budget skiiing in the Carpathian Mountains

The ski resort of Poiana Brasov, in the Carpathian Mountains, is 12km from Brasov and provided the dramatic backdrop for the Hollywood flick Cold Moutain. Recently hailed the best value resort for budget skiing by Post Office Travel Money, the resort has a good snow record with cover lasting until March. Slopes are gentle and wide, and are suitable for beginners and intermediates.

An hour-and-a-half bus ride from Brasov is the medieval walled city of Sighisoara, famous for being the birthplace of Vlad the Impaler, otherwise known as Count Dracula. Eat cake in the house where he was born, now a restaurant, before soaking up the atmosphere as you walk the city’s pretty cobbled streets.

As I leave Romania I feel relieved to have spent kept the notorious vampires at bay, and lucky to have discovered the fortress cities, amazing brown bears and a traditional way of life still honoured by its warm and hospitable people.

While Romanians have myths about vampires, the association of Count Dracula with Vlad III the Impaler was just a figment of author Bram Stoker’s imagination in 1897.

The name Dracula comes from that of Vlad’s father, Vlad II Dracul, which means ‘dragon’ in Romanian. Born in Sighisoara, Vlad III (c.1431 – 76) was certainly a mighty force – he fought ruthlessly against the Turks and
his method of execution was impaling people on a stake.

Spend a night at the impressive Hunters Castle in Turda where you can feast on ‘Impaled Tartar Steak’. Alternatively, spend a bite-free night at the four-star House of Dracula Hotel near Brasov. See: huntercastle.ro;  house-of-dracula.com.

WHEN TO GO: Any time. Romania is a year-round destination. Ski until March in Poiana Brasov.
GETTING THERE: Wizz Air flies from London Luton to Cluj-Napoca in Transylvania. Alternatively you can fly Wizz Air to Timisoara (to the West near Hungarian border) or easyJet to the capital Bucharest and take the train to the Transylvanian region.
GETTING AROUND: Buses and trains are very cheap compared to the UK. Though most are pretty old and cumbersome, they at least run to timetable. See autogari.ro for buses and infofer.ro for trains.
VISAS: No visas required for Aussies, Kiwis and Saffas.
CURRENCY: Romanian New Lei. 1 GBP = 5 RON.
LANGUAGE: Romanian.
GOING OUT: A beer costs 4-6 RON.
ACCOMMODATION: Basic cabins cost from 30 RON and hostel dorms cost 100 RON.
GET MORE INFO: romaniatourism.com.

Veteran chopper notches up 10,000 hours in the air