Tropical paradise: Visit Palawan, The Philippines, one of the world’s top travel destinations

Over the past 50 years, South-East Asia has enthralled backpackers with its exotic cultures, friendly people, and breathtaking natural sites. Bali, Thailand and Vietnam have taken the lion’s share of the spoils, selling unforgettable experiences to foodies, explorers and beach bums alike.

Another country that should be bundled with these but has been inexplicably left out is the Philippines. Comprising 7,100 tropical islands home to 10 distinct indigenous groups and hundreds of aboriginal tribes, it’s among the region’s most interesting, beautiful and best-value destinations. Palawan – a 400km-long island in the country’s south-west – is without question the jewel in its crown.

Dubbed ‘The Last Frontier’ of the Philippines, this cigar-shaped island is an ecological wonderland boasting vast swaths of untouched jungle, long lazy beaches and some of the most awesome geological phenomena on the planet. Walking through Puerto Princessa, Palawan’s sleep little capital, is like being transported into an animated film.

Surrounded on all side by turquoise waters, cloud-ringed mountains and mangrove trees, it’s the cleanest city in the country thanks to the efforts of logger-turned-greenie Mayor Edward Hagedorn. Wheelie bins abound, garbage is collected daily and litterbugs face citizens arrest.

Lighting fires, cutting trees and digging wells is illegal, and Mayor Hagerdon has been known to sink the vessels of those who use dynamite or cyanide to fish. It’s little wonder so many of the people who live here, included the much-loved mayor, emigrated from other parts of the Philippines.

Puerto, as the locals know it, is also the gateway to Palawan’s best natural attractions, including the islands and reefs of nearby Honda Bay. But to see something truly spectacular, visitors need to make the two-hour journey to Sabang Beach. Sabang is nothing out of the ordinary for Palawan – just another perfect beach lined with coconut palms, thatch-roof eateries and bungalows to stay the night. 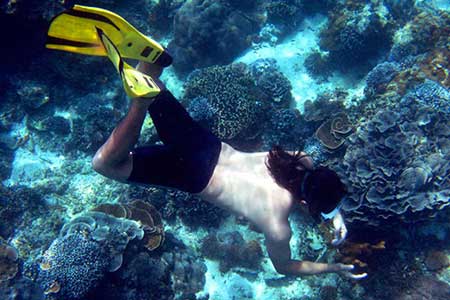 The real attraction here is the Puerto Princessa Underground River – a subterranean canal that runs 8.2km into the earth. About half of its length can be explored in guided canoes, which depart regularly from a small lagoon at the north end of the beach. The feeling upon entering the cave is like travelling through space: the darkness is overwhelming, so the canoes come rigged with lights.

Our guide uses them to illuminate walls layered with stalactites and stalagmites, some of which resemble characters from the Bible. We’re shown one rock that’s the spitting image of the face of Jesus and others that depicts the Holy Family and the Three Kings. Nothing lives inside but bats and swiftlets – small birds that use sonar to navigate in the dark. Yet the most impressive feature is a set of caverns with cathedral-like ceilings that stretch 65 metres high.

The slightest sound echoes incessantly, sending thousands of bats into a spin. From Sabang the trail continues north, to the beaches and islets of Palawan’s west coast. You can get there via minivan, on a rented dirtbike or hitch a lift in a ‘jeepney’ – elongated jeeps that are the national carriers of the Philippines.

But a less stressful alternative exists in the form of motorised catamarans that ply the South China Sea coast. A half-day journey from Sabang takes one to Port Barton, a former logging station set on a tranquil little cove. Named after a British colonel who surveyed the area in the 1940s, Port Barton is one of the most picture-perfect beaches in the world.

The sand is like powder and the water is transparent – lukewarm in parts and still as a lagoon. There’s nothing much to do but sun bake on a hammock, or trek through the jungle to nearby Pamoayanan Falls. The next stop on the tourist trail is the town of El Nido, a full day’s journey north of Port Barton. Sandwiched between limestone formations that resemble skyscraper-sized chess pieces, El Nido is a place of eternal beauty. 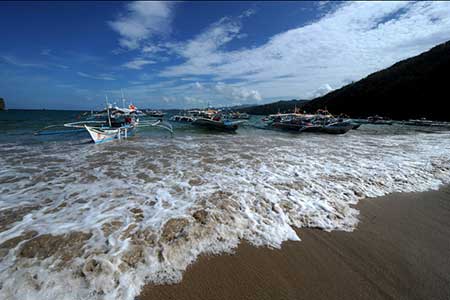 British author Alex Garland wrote his seminal novel The Beach here, inspiring a generation of backpackers to follow in his wake. El Nido is also the jumping point for the Bacuit Archipelago, a series of interlinked bays pockmarked by karst islands and islets that literally explode out of the sea. Only two resorts have been built in the Bacuit Archipelago, both of which cater to the super-rich.

The first lies on Miniloc Island, an extinct volcano renowned for its hidden lagoons. The only way to reach them is via a circular swimthrough, inside of which an aquatic Garden of Eden awaits. The snorkelling here is outstanding, with luminescent coral gardens and all kinds of fish zipping about. But you don’t have to stay at the fancy resort to enjoy it, with day tours from El Nido starting at $15 a pop.

Despite Palawan’s mind-blowing beauty, the real treasure is the Palawanians themselves. Strangers are universally addressed as ‘Sir’ or ‘Madam’, while the locals practically fall over themselves to help travellers. What they offer goes beyond hospitality; it’s a deeply ingrained sense of responsibility for visitors.

“I think it is inherent to all Palawanians, because they are by nature very helpful and cooperative people,” explains Mayor Hagedorn. “If you visit a poor family living in the country, they will cook for you a chicken even though it is worth a fortune to them. They have a compassion for strangers that I personally find outstanding.”

Video: State of Origin’s game 2012 fight – as per tradition