Amid the whimsical fairy chimneys and rock caves, it is hard to tell which planet I’m on. Conical-shaped rock formations poke out into the vermillion skies against a backdrop of volcanic peaks and red-rose cliffs. Gazing out at the unworldly landscapes, I imagine this to be the land of hobbits and elves.

Such edgy landscape has long been a trademark of Cappadocia, the ancient region of Anatolia in central Turkey. There is nowhere else like it in the world: deserts studded with thousands of hoodoos, multi-coloured cliffs and staggering rock spires resembling scenes from outer space. Much of Cappadocia lies on a high plateau of more than 1000m in altitude, pierced by numerous volcanic peaks – which are perfect conditions for such peculiar geology. 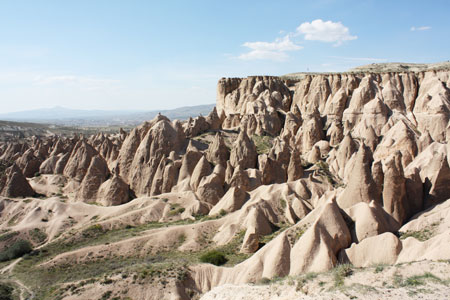 The fairy chimneys of Cappadocia, Turkey.

That evening, I catch the sunset atop the cliffs surrounding Göreme village – just a short hike from my cave hotel. I’m surprised to find myself alone, with no one in sight besides the dramatic panorama. There is silence except for the occasional squawk of a pigeon. I sit with my legs dangling above the ledge of the viewpoint, savouring the precious moment.

As dusk sets in, I trek back down the slopes to the Göreme House Hotel. Part cave part house, the atmospheric abode is a restored Anatolian house constructed out of natural stone from Cappadocia.

Staying at this family run guesthouse is an experience in itself – not just for the hospitable staff and rustic cave interior, but for the million-dollar view from my window. The Göreme cliffs are the last thing I see at night and the first thing I wake up to in the morning.

The next day, I venture out into the valleys with Halis, the hotel manager who volunteers to be my guide for the day. Our first stop: Pigeon Valley, a deep, entrenched gorge mapped with a network of hiking trails and biking paths. From above, it looks like a giant maze segmented by eroded towers.

We meet a group of Austrians on a biking holiday in Cappadocia. “We’ve gone biking in many parts of the world, but this must be one of the most amazing places we’ve ridden in,” they say.

Continuing our journey further south, the rugged landscapes begin to give way to flat green lands. Beige cliffs are replaced by extensive wineries and pumpkin fields.

At the Kaymakli village, we stop to visit the largest underground city in Cappadocia, an UNESCO site dating back to the 4th century. We navigate narrow tunnels and steep rock-cut stairways to explore the three storeys of living areas, stables and churches.

“This underground city was built by early Christians as a refuge during the religious persecution. Based on the sheer size of it, it must have supported a large population underground,” explains Halis.

The drive further south is bewitchingly beautiful, yet worlds apart. Vast fields of apricot groves flank the road before it corkscrews into a meandering canyon. Villages topped by rock-cut churches stand atop undulating slopes. This is the Soganli valley, best known for its numerous Byzantine cave churches and artwork. “This is one of my favourite places in Cappadocia to bring visitors to,” Halis says. “It’s the least crowded area, and off the tourist trail.” He’s right – we’ve left civilization behind and gone back in time.

Hot-air ballooning above Cappadocia at sunrise induces both a sensory and superlative overload: the kaleidoscope of colours, the wispy clouds that hang low, the patchworks of green groves and brown valleys make me buzz deliriously.

Cappadocia is one of the best hot-air ballooning spots in the world, thanks to its strangely unique landscape and favourable weather conditions. Halis, who is also a hot-air balloon pilot, lifts us off into the cyan skies. Rising languidly above the fairy chimneys, we drift further away from terra firma and closer to the clouds.

Below me, hundreds of hot-air balloons dominate the skyline of Cappadocia. I feel as if I’ve entered Narnia – a fantasy world. 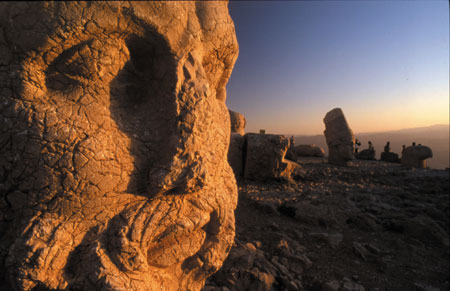 As one of the most important ancient sites in Turkey, this sprawling city near Selçuk features well-preserved ruins including the iconic Library of Celsus, the massive amphitheatre and the marketplace. It was once the second largest city of the Roman Empire, with a population of about 250,000 people.

At the summit of this 2134m-tall mountain in south-eastern Turkey lie large stone statues believed to have been erected by King Antiochus in 62BC. These statues of the king, animals and Greek gods were assumed to be part of a royal tomb, which were deliberately destroyed by Iconoclasts. The heads of the statues are now scattered throughout the UNESCO World Heritage site.

The city of Troy, both factually and legendary, was located in north-western Turkey, and now its archaeological site is a UNESCO World Heritage site. Troy is best known for being the focus of the Trojan War as depicted in Homer’s book ‘Iliad’. The archaeological site lies within the province of Çanakkale where the “wooden horse” from the 2004 movie Troy is exhibited.

Perched on top of the white travertine pools of Pamukkale, the impressive remains of the ancient Greco-Roman city feature Roman-era ruins, a poisonous spring called Plutonium and a thermal Sacred Pool in which you can swim with ancient artifacts. Located in the Denizli province of Southwestern Turkey, the Hierapolis was believed to have been founded by the god Apollo.

Once capital of the Roman province of Caria, Aphrodisias is an ancient city built in the 4th century. The extensive ruins of Aphrodisias are equally impressive with a sizable stadium, vast marketplace and the popular shrine dedicated to Aphrodite, the Greek goddess of love. Thanks to its inland location west of Denizli, this ancient site is much less crowded than Esphesus. 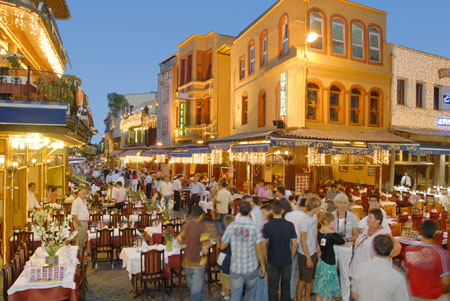 In Istanbul ancient mosques and souks are just a bridge away from soaring skyscrapers, uber-chic bars and boutiques. I take a crash course in Turkish culture with Istanbul local, Haty.

I can easily see why they’re hooked on tea-drinking.  Ever since the 18th century, tea has been fundamental to Turkish social life. Haty tells me why: “There is a Turkish saying that goes, ‘Caysiz sohbet, aysiz gok yuzu gibidir’.” Conversations without tea are like a night sky without the moon. Indeed.

Souk it and see

Next, we head to the Grand Bazaar to conquer Istanbul’s world famous souk.

Under dome-shaped ceilings, alleys are lined with rows upon dizzying rows of jewellery, pottery and carpet stalls. Blinding light and colours from the lantern shops heighten my scenes while the smell of perfume hypnotises me into a trance. Scents waft from bread ovens and kebab stands leading me deeper into the labyrinth – until I reach the succession of antique stores where a brass bowl catches my attention. “In Turkey, you have to bargain, no matter what you buy,” Haty warns.

“200Lira for the pretty lady,” the cheeky bearded vendor says, via Haty’s translation. I heed Haty’s advice and after five minutes, we settle for half of the original price he offered and leave with a bowl in hand and smiles on our faces. 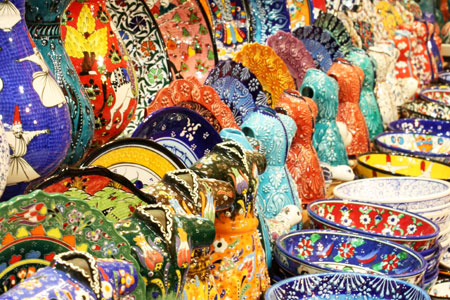 Haty guides me into Sultanahmet Hamami Turkish bath, in the historic district of Sultanahmet. “The Turkish bath has been a tradition in the Arabic culture since the 14th century; today it is still very much part of modern day Turkey. I often come here with friends to hang out and relax,” says Haty.

Inside, I meet my tellak: a stern middle-aged woman, with scrub in hand and sweat dripping off her flushed face. She demands I strip off my red-and-white cloth. Uh oh… I’m left stark naked. After motioning for me to lie on the large marble stone in the centre of the room, she slaps a bucket of hot foam water on to my body before scrubbing me from head to toe with a firmness that edges towards brutality. Haty sniggers as she watches my tortured expression. But as shocking as the scrub experience is, by the end of it, I am feeling refreshed and elated, and as light and giddy as a balloon.

When to go: April-mid June and September-October are the best time to travel for pleasant weather. Cappadocia is generally cooler than the coastal area.
Getting there: Fly from Heathrow to Kayseri via Istanbul on Turkish Airlines (return fares from £345).
Accommodation: Room rates at Göreme House Hotel start from £60 including breakfast and tax (goremehouse.com). Hot-air ballooning and tours can be arranged with the hotel.
Get more info: tourismturkey.org

All Blacks stick to tested squad for Wales