Riots and looting spread across the UK last night, leaving London mostly peaceful, as16,000 police officers descended on the capital, promising tougher tactics than had been used over the last few days.

In Birmingham, three men were killed when a car drove into them as they were protecting their property. 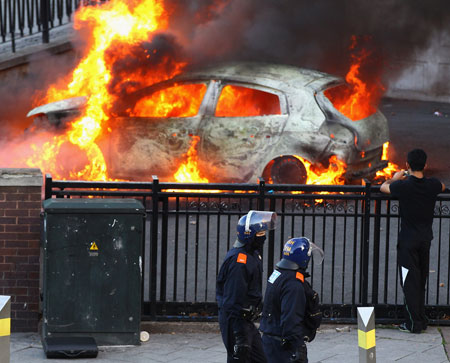 London waited with bated breath to see if the anarchic scenes of riots and looting would return for a fourth night but, in the event, the city saw only isolated pockets of unrest.

While trouble flared up elsewhere in the country, arrests in London dipped, with 81 new detentions last night bringing the total to 768.

Although the looting and mob rule of the previous three nights were not repeated in London, minor attacks broke out in the city, reaching upscale Knightsbridge.

A fire involving a number of vehicles was reported on an industrial estate in Tottenham, north London.

In some parts of London, residents took to the streets to defend their property last night.

A group stood guard outside a Sikh temple in Southall, west London, while people marched through Enfield, north London, to deter looters. 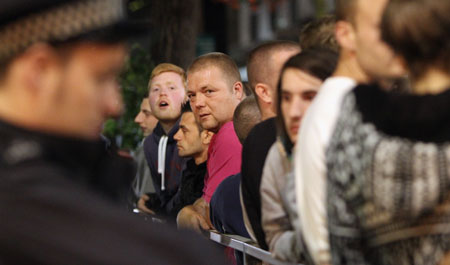 The decision to send crack antiriot teams to London from other parts of the country left cities like Manchester vulnerable. Reinforcements left Manchester for the capital only hours before gangs of youth began to riot and loot in the city’s shopping centre.

Yesterday, the government decided not to send in the army, but said police were "not scared" of using plastic bullets to bring the riots under control.

As the rioting in London died down, it emerged that children as young as 11 were among those arrested. Every police cell in London is now full, meaning suspects must be transported outside the city.

One man died in London, found in his car in Croydon suffering from bullet wounds. Another man, from Ealing, is critically ill in hospital after standing up to looters outside his house.

Police have now arrested a 21-year-old man on suspicion of arson for allegedly starting the fire that devastated the Reeves Furniture Store in Croydon.

Police have issued photographs of rioter and looters and troublemakers, appealing to the public to help identify them. Have a look here: met.police.uk/disordersuspects

Clarence Clemons dies with E Street Band members by his side