For those unfamiliar with the perverse rituals of posh universities, de-bagging is about taking someone’s trousers off when they don’t want their trousers taken off. Bagging, however, doesn’t mean pulling them up.

As in Munro bagging, it means collecting big Scottish hills.

The big hills – and there are 282 of them – are called Munros. Each is over 3,000 ft high, a condition of being called a Munro, and named after Sir Hugh Munro who first made a list of them in 1891. People (not all nerds) collect them, as in climb them, and tick them off the list.

The record holder for collecting the full set is a very non-nerdish bloke called Steven Fallon who, by the time you read this, will have done the lot. 13 times. He runs in races up and down them too and is just the kind of guy to be your mountain guide, like he was mine. Take my tip, unless you know what you’re doing on a mountain, don’t go out without one. Each year
people die on these hills.

Our idea was to creep up on a really big one over three days. 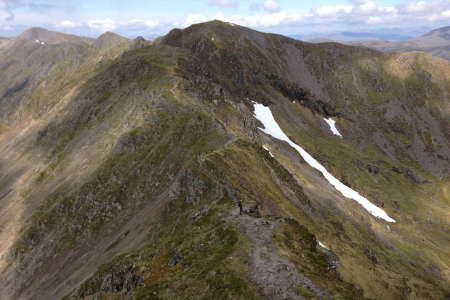 We warmed up by bagging Beinn Sgulaird (we called it Ben Schoolyard – it’s evidently quite common for Sassenachs to make up alternative names they can pronounce), starting from sea level at the head of Loch Creran on Scotland’s craggy west coast. A rough track soon morphs into a faint path which gradually disappears into barren wilderness. No dramas, but the panorama expands dramatically with the islands of Mull, Jura and Arran coming into view.

There are a couple of what Steven calls ‘minor summits’ to hike over before reaching Ben Schoolyard’s cairn (that’s the pointy pile of rocks that tell you you’re at the top). We return the way we came up, detouring up Creach Bheinn – a hill they call a Corbett which, being less than 3,000ft but more that 2,500ft, is a lesser beast than a Munro. It all takes about eight hours.

But Munros are a bit like Maltesers, once you’ve had one, you want another; so now we are going for two in a day and the Dalmally Horseshoe will give them to us. Well, not so much give as reluctantly surrender.

From a lay-by on the A85 near the Cruachan hydro power station visitor centre (the power station itself is under the mountain) we nip beneath the railway line and start up ‘a pretty steep’ hill to reach the Cruachan Dam that holds the power station’s water. A leisurely walk around the reservoir later, we’re aiming up to Ben Cruachan’s summit. One down.

We turn east next via what Steven describes as ‘some easy Grade 1 rock-scrambling’, although he forgets to mention a large smooth slab half the size of a house hanging at an acute angle looking out over not very much. Actually, it’s probably a bit short of half the size of a house and hanging at an angle that might be closer to 30 degrees than acute. It does, after all, have one hand hold. It also gets psychologically easier as we watch someone coming the other way over it carrying a small dog.

Then it’s towards Stob Daimh to bag the second Munro of the day. The return is southwards, back down to the reservoir to take a glimpse of the light at the end of a tunnel the power station people have blasted through to the other side of the mountain.

Now for the big one. It’s in Scotland’s most scenic glen, the often dark and broody Glencoe. So broody that last time I was here it snowed and hailed on me. On this glorious early summer’s day, it doesn’t look half so dark and broody. Which is just as well given that a briefing note menacingly suggests ‘this day is very weather dependent’.

This is Aonach Eagach. It means ‘the notched mountain’. And it’s where the mainland’s narrowest ridge connects two Munros. Once you’re on it, there’s no way off. No way off that you’d want to think about, that is.

We’re heading up a steep path to our first summit, but this is just 2,000ft and therefore no Munro. Nor, being a mere ‘Munro top’ (high enough, but too near a proper Munro to be a proper Munro), is our next peak, Am Bodach. There’s a scary view of a rock called the Chancellor and, yes, it looks as mean as its name suggests so we press on.

Now well on the ridge, we head west along its crest to Munro number one, Meall Dearg, otherwise known as Red Hill or the hill of the brown underpants. As might equally well be the next two notorious pinnacles dubbed ‘terror city’ by Munro bagger and TV presenter Muriel Gray.

This stuff is not for the feint hearted although they say people with vertigo do bag Munros. I don’t suffer from vertigo unless vertigo is a knot in your guts. “I have a rope with me for confidence, but it’s unlikely to be required,” Steven assures me.

It’s ‘only’ two kilometres between the Munro peaks but it takes a good two hours to the second of them, Sgorr nam Fiannaidh. Home, or I should say the road that’s a good three kilometres from the car park, is 900 metres below. Nine hundred metres down a sharp screed wall that “will be okay if you treat it like an escalator moving under your feet – just go with it”. More like skating on sharp-edged marbles the size of bricks and breeze blocks, I’d say.

I did not, however, lose my trousers which are, by now, brown. It’s the screed dust. Honest.

Looking for some adventure of your own? Plan your Scottish getaway with TNT Tour Search.

The South Pole Saloon comes to the heart of Brixton