Brighton is a classic British seaside resort on the surface with vintage beach-side rides, greasy fish and chips and brightly lit arcades.

The cobbled streets are quaint and nostalgic, as are the old-fashioned hobby shops – but there’s something far more salacious bubbling beneath. Perhaps it’s the 19th-century Royal Pavilion-turned Mughal-style love nest that anchors the city, or maybe it’s the sailors’ whispers from the sea. Either way, the city has an air of old-style smut, with velvet-lined sex shops stuffed down alleyways and pubs delightfully decorated with Victorian erotica.

There are secrets a-plenty to uncover here, but tread carefully: over the years, many a heart has been broken along the windswept coast line and many a night has been made in the cavernous depths of the raucous clubs.

Things to do: There is nothing more iconic of Brighton than the garishly lit fairground and pier. Stretching into the grey ocean, this slice of British history harks back to a more simple time when an ice cream and a go on the slot machines was all you needed to keep the kids quiet. In the summer it’s a star tourist attraction, but in the bleak winter the retro feel is haunting as the creaking rides blink on and off against the stormy sky and rainwater slowly drips from the roof of the buzzing – but perennially empty – arcade.

Outside of London, Brighton is perhaps the best city in the country for vintage browsing. Here the flea-market finds are more obscure (some may say garish) and better priced, and the collections are so vast, you can lose hours sifting through boxes. There are also records galore, which for a serious collector will be, quite literally, music to their ears. The offerings are diverse and, if you dig deep, you’ll bag yourself a serious deal or pocket a rare gem. Along the vintage drags of North Laine, you’ll find WaxFactor and Across the Tracks, which are veritable treasure troves, but it’s what you discover in between, discarded on antique shop floors, that will really rock your world. 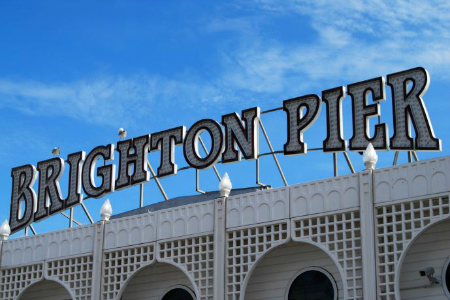 Where to stay: Brighton has fewer hotels than you would think for such a popular weekend destination, but it’s jammed full of small family-run guest houses that are a mix of charm, nostalgia or, sometimes, downright decay. Do your research before you go so you’re not in for a surprise.

If a quiet weekend is what you’re after, steer clear of anywhere that rents out rooms in bulk. These are generally popular hen or stag night destinations and should be avoided – unless a 4am wake-up call from a 10 liquored-up boozehounds in Yeti costumes, singing some form of slurred tune sounds ideal.

A trendy choice in Brighton right now is the boutique MyHotel, with its atmospheric mood lighting and curved walls helping to maintain Zen. Each room is individually designed, but all are united by an Austin Powers-esque 60’s vibe, complete with rounded bed frames and zig-zag wall patterns that are, well, groovy baby. There’s also a stylish Indian restaurant that serves modern twists on the classics, as well as an ever-lively coffee shop that will keep you deliciously caffeinated up to your ears. Rooms at the award-winning hotel start at £90 a night.

The B&B’s in Brighton remain largely family run, which is refreshing and means each one is truly unique. The boutique One Broad Street is 30 seconds from the beach, and many of its rooms face the sea front (£60-120). In a similar vain is 19 Brighton and the funky Snooze guest house. Again, the list here is long and quirky so do some digging to find the perfect fit for you.

Where to eat and drink: Fish and chips are the name of the game in Brighton, so roll up your sleeves and dig into a delicious newspaper wrapped cone of fried, salty goodness. It’s practically a requirement that you douse the offerings in vinegar (it’s got to be malt – don’t ask questions) and use a wooden pick. All along the pier there are places to choose from and each stand offers a better deal than the last, so follow the crowds.

If it’s too much choice, head to Bardsley’s of Baker Street. Established in 1926, they claim to be the original and, though they’re not the cheapest, they don’t scrimp on seasoning or sauce. They even do a half portion of chips if you’re trying to be healthy, but who are you kidding? If you’re looking for something more classy (what’s more classy than licking salt off the tip of your nose and wiping your greasy hands on a plastic table cloth, we’d like to know?) then head to The Coal Shed for some sizzling strips of juicy meat, or the upmarket Restaurant at Drakes, for some modern European fare.

The Lion and the Lobster is an exceptionally good gastro pub, with some great local ales to boot. As you wander the streets, you’ll also find no end of trendy burger joints, Mexican eateries and Japanese cafes.There are hundreds of old-fashioned boozers in Brighton, all with their own charm and flavour. For ale aficionados, get sampling at the Evening Star or get hot under the collar at the outrageously camp Regency Tavern. But with more than 900 places to drink in the city, we’re just getting you started. 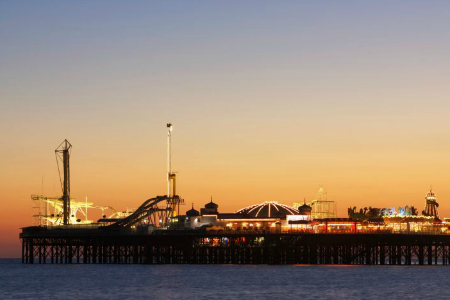 Where to party: The scene of many a hen-do gone mad, Brighton’s late-night establishments are thriving. Here, up-and-coming bands test out their wares before moving on to the more discerning crowds of London, and well-known stars return for sell-out gigs, pumped full of affectionate nostalgia for the place that gave them a head-start.

The website brightonnoise.com has a really thorough list of upcoming club nights, and is worth a hefty peruse before you go. Thebrightonsource.com also does a good job listing nights out.

The Office, which is a wood-beamed bar offering more than 25 types of gin, is a great place to get started before hitting the streets and their drinks are truly out of this world, with everything from saffron infused gin to dandelion martinis. Riki Tik, with its Jamaican dance hall trills and tropical vibe, is also a popular choice that will have you jiving into the wee hours.

Venues such as Concorde and The Brighton Dome have big live-music schedules. But again, these are mere beginnings, as there are hundreds of clubs to choose from. The city centre is packed full of indie strongholds, best found by looking at posters in pubs during the day and asking around. There are also many country-wide chains such as Oceania for those of the hen and stag do persuasion.