Liz. Petite, with flawless skin, a delicate bone structure and wide, almond-shaped eyes, her sartorial choices are made with practicality in mind. Her slim frame is hidden underneath layers of baggy clothes and there’s not a hint of makeup on her pale face. As Liz, a guide with Unseen Tours, has spent a large part of her life living on the streets, I expect if anyone can teach me about the secrets of east London, it’s her.

With an ethos to help homeless people, the Unseen Tours initiative aims to “show London’s historical and cultural quirks in an unusual and entertaining way“. The tours are not of the homeless, but with them.

Our group meets in Hoxton Square for a one-and-a-half-hour tour through Hoxton, Shoreditch and Brick Lane, finishing at Spitalfields Market. As we wander, Liz demonstrates a comprehensive knowledge of the area, interspersing historical facts with anecdotes about life on the street. We pass the Boundary Estate, one of the first social housing developments in Europe set up in 1900, and she points out a building next to a church where she used to squat before the vicar rather uncharitably insisted she and her companions relocate.

Although she is remarkably open about everyday life on the street, Liz is reluctant to go into detail about the specific turns of events that led to her homelessness. But she does reveal that, “making the most detrimental life choices” alienated her from her support networks and consequently left her with nowhere to turn. The daughter of a teacher and a lay rabbi, she says: “I come from a nice background. Sometimes I feel like I’m just undercover here.”

She’s not, though; she’s living proof that a comfortable upbringing is no guarantee of security later in life and that homelessness really can happen to anyone.

A history lesson
As we get to The Ten Bells pub on the corner of Commercial and Fournier streets, which was patronised in the 1880s by victims of Jack The Ripper, Liz, 30, explains it’s possible he targeted this area because the female boarding house nearby, filled with poorer, more vulnerable women, made for easy prey.

She also tells us that although Spitalfields today is bursting with trendy bars and shops, in years gone by it played a key role in some of the most significant political movements in Britain. On Hanbury Street, she stops outside Christ Church Hall, where Charles Dickens used to give public readings of his works in at a time when most of Britain was illiterate, inspiring reading groups, opening up the possibility of literacy and education to the masses for the first time.

The building saw the birth of the Suffragette movement, and was used by the Matchstick Girls to hold strike meetings, which led to the establishment of the trade unions.

Then, when we reach St Leonard’s Church, Liz bursts into an impromptu version of the children’s nursery rhyme Oranges And Lemons, depicting a conversation between the bells of several City churches. In the song, the Old Bailey’s demands to know, “When will you pay me?” to which the bells of Shoreditch reply, “When I grow rich”. People on the tour are very excited to discover this is one of the churches to feature in the song they spent many a breaktime chanting along to in the playground. 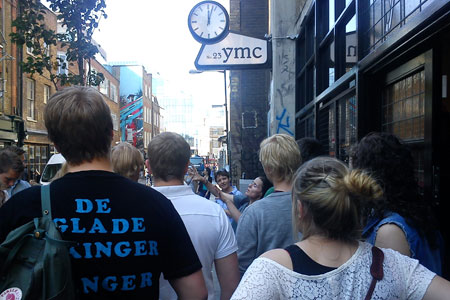 I also discover that Liz and her partner have seven-year-old daughter. Having lost her social housing placement several weeks ago thanks to government cuts, she’s back on the streets once again and is currently living in a tent in Finsbury Square amongst the Occupy London protesters.

However, Liz’s situation could be worse, she concedes, recalling when, during a previous stay on the streets, a group of drunken passers-by decided it would be amusing to set fire to all her possessions. “It was just devastating,” she says.

When I ask her how she copes, Liz shrugs and replies: “People are more resilient than they realise.“

Working as an Unseen Tours guide has had a positive impact on Liz’s life – guides receive 60 per cent of tickets as well as expenses – but the role offers them a purpose, a routine and the chance to interact with people they would otherwise be isolated from. “I provide a service. I have knowledge, skills. People look at me and don’t just see a homeless person sitting on their bum, but somebody to talk to, listen to and learn from,“ Liz says.

The Sock Mob
This is exactly what Lidija Mavra envisioned when she founded The Sock Mob, the group behind Unseen Tours, in 2003. An informal assortment of Londoners who wanted to help homeless people integrate into society, they distributed socks to break the ice and befriended them. Spending time with them and listening to their stories, Mavra realised living on the streets gave homeless people a specialist knowledge of the city, and developed the Unseen Tours. Training homeless people as guides empowers them, while visitors and Londoners hear an alternative story of the city.

Much like The Big Issue – which is celebrating its 21st birthday this year – the philosophy underpinning The Sock Mob’s work is that homeless people deserve to be treated with respect, and achieve this through self-empowerment.

This outlook is shared by Cardboard Citizens, a performing arts company which brings together and changes the lives of homeless through theatre. Its performers are street people who receive professional training and a decent wage, and the group regularly collaborate with major arts organisations, most notably The Royal Shakespeare Company.

Meanwhile, Streetwise Opera promotes music-making among homeless people, training participants to a professional standard. It runs weekly music programmes in homeless centres across England and have staged a number of critically acclaimed, award-winning operas. This year its is performing a production, With One Voice, at London’s Royal Opera House as part of the London 2012 Festival.

Approaching the end of the Brick Lane Unseen Tour, Liz stops and gestures to a phone box, explaining it’s a popular spot to score drugs. As if on cue, a bedraggled-looking man exits and hurries up the road. We’re just around the corner from a main stretch favoured by the trendy Silicon Roundabout arty-types, so I’m surprised to learn this is
a flashpoint area.

“It is a trendy, vibrant neighbourhood,” Liz agrees, “but this is London and everything can change in a heartbeat.”

East London is filled with graphic designers, fashion students, artists and gallery workers. But look a little closer and you’ll notice the street people who’ve been here for years. Both sets occupy the same area but they are living in separate worlds. As Liz says: “Most people don’t truly know the places they think they do at all.”

The Sami people of northern Scandanavia

How To Choose The Right Vape Kit That Suits Your Needs

High times: this is Amsterdam in 48 hours