Van Tour Europe is the Antipodean expat’s rite of passage. But we say, why let them have all the fun? If you want to head back north for the summer, join the Aussies, Kiwis and Saffas on the road across the continent.

Even though it’s called a ‘tour’, there are no guides and no itinerary. It’s effectively one huge convoy of campers making their way from one side of Europe to the other. Many go via different routes, meaning you can make it up as you go along; met a hottie in Lisbon? Follow them to Seville by all means – just don’t get stalker-y, that’s weird. Loving the surf in Lisbon? Stay there for a few extra days and skip on Venice (you can’t surf on canals, after all).

The rules are, as the cool folk in Grease say, there are no rules. Just chat with your fellow vanners and see what their plan is. This is also useful for finding out where the best camp sites are for Euro Tourers – you don’t want to end up pulling into a site full of families, as their children will likely cry just at the sight of you.

On these here pages you will discover the main stops to make, the festivals to hit, and an idea for an itinerary, along with tips for renting a van. For starters, rent with Spaceships Campervan Hire (spaceshipsrentals.co.uk) or Wicked Campers (wickedcampers.co.uk) and you can’t go far wrong.

The most important thing at this stage, though, is to call your mates up, hand in a lengthy holiday form at work, and start detoxing your liver – it’s going to need it…

There are four main stop offs, which is as ‘official’ as this tour gets. The first campervan congregation occurs July 7-14 at the San Fermin Festival in Pamplona, made famous by the running of the bulls. The next spot where the majority of vanners meet again is in Lagos, Portugal, and then you converge for the big finale, the 100 Club party, which is held in Munich the day before Oktoberfest (September 19-October 4); funnily enough, everyone hangs around for this 15-day beer festival too.

This crazy tradition started for practical reasons – to get the bulls from outside the city into the bull ring. Now it has become a huge tourist attraction where brave/crazy people try to outrun the bulls. Animal activists hope such people get a horn in an uncomfortable place as they believe it is cruel, but whether you say bully for them or bullshit, it is here that you first meet your fellow vanners, and there’s still plenty to do beyond the bulls (see our feature on p54 for more).

This is where the majority of vanners head for after the chaos of Pamplona. Here, you can chill out on the sand and surf in the waves – but don’t go getting too relaxed. You’ll be back on it again come nightfall, when the camper crowd hit the cheap and lively bars and clubs of this Portuguese tourist town.

This pre-party party is – and you’ll find this hard to believe after what your liver’s already been through – the biggest of them all. The vanners reconvene in Munich to drink, vomit, piss and get naked – usually all at the same time. Based around a game where you have to do a shot of beer every minute with other rules thrown in, like you can only drink with your left hand and so on, anyone who breaks a rule gets punished. This involves drinking from a beer bong that has everyone’s leftover food in it – from sardines to spaghetti to gone-off meat. If you throw up, you may even be forced to drink that too. Your prize if you win? Sweet revenge on the judges…

They might make you wear lederhosen, eat weird-sounding things like wiener schnitzel, and dance like your dad to a brass band, but the Germans serve beers by the stein, which can hold a litre, so all is forgiven. Plus, girls look surprisingly hot in lederhosen. This 15-day festival of beer glorious beer is lots of raucous fun, and the perfect way to bid auf Wiedersehen to your fellow vanners.

Other festivals to hit

These festivals also take place during or just before the tour, so check out which ones you want to go to and make sure you incorporate them into your trip.

SONAR
Barcelona, Spain, June 18-20
Sonar prides itself on its selection of ‘advanced’ new music and hosts the most cutting-edge and forward-thinking artists out there, irrespective of their musical genre. The Chemical Brothers, Fat Freddy’s Drop and Evian Christ are among the acts to be announced so far.
sonar.es/en

La Batalla del Vino
La Rioja, Spain, June 29
Start early by heading to this wine festival in La Rioja (recognise the name?). Far from being a sophisticated affair, there’s no wine sniffing, swilling and sipping here; more like snorting, throwing and glugging. Crowds use buckets, water pistols and jet packs to soak each other with red vino, drinking plenty of it along the way.

Super Bock Super Rock
Lisbon, Portugal, July 17-19
As one of the longest-running festivals in Europe, this regularly attracts big names – one of which is the legendary Sting this year, joined by Florence and the Machine, Little Dragon, Kindness, Modernos and more. The beach-side back drop is an added bonus.
Superbocksuperrock.pt

Bilbao BBK Live
Bilbao, Spain, July 9-11
We’re even more excited about one of our favourite festivals this year, as not only is it celebrating its 10th anniversary, but Aussie bands The Cat Empire and Sheppard are performing. Always amazing at getting a crowd going, Mumford and Sons, Muse, The Jesus and Mary Chain and Ben Harper will also be singing as the sun sinks behind the city and you watch from a blissful spot atop a mountain. With acts only playing in the evenings, you’ve got the days free to explore Bilbao and its beaches. Definitely worth a stopover.
bilbaobbklive.com/2015/en

FIB
Benicàssim, Spain, July 16-19
Festival-goers love Beni, with its hot weather and even hotter tunes. Its line-up offers a nice mix of cool rock and quirky pop for those who prefer their music a bit more mainstream.
fiberfib.com

Click NEXT for an itinerary idea and campervan tips 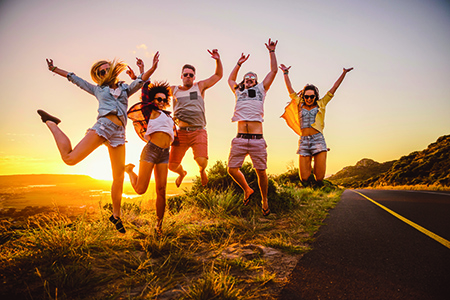 Try this itinerary for size….

As we said, there are four main meet-ups on this tour. In between that it’s up to you wherever the hell you go. Leave it to the roll of a dice for all we care. But if you are the plan-ahead type, here’s what we suggest…

Starting in the UK, head to Pamplona through France, getting the ferry to Calais, spending time in Paris and driving towards Bordeaux. This takes you into Spain, where you should stop by the cool San Sebastian and La Batalla del Vino festival before meeting everyone else at the running of the bulls in Pamplona. From here, join the convoy and head to Lisbon and Lagos, and then head back into Spain to Seville and then up to Madrid. From the capital go east to the coast and see Valencia and then up the coast to Barcelona, if you didn’t already hit this for Sonar festival.

Keep up the coast (taking in Girona and Sant Quirze de Colera) and head into France, eventually reaching Marseille. This historic French city is great to explore and is steeped in history. If you’re more of a beach bum, we’d recommend those between La Pointe Rouge harbour and La Madrague.

From Marseille, some would suggest going inland to put in a stop in Lyon, which has a network of underground passages – traboules – and a great clubbing scene. Alternatively you could head up the coast to Cannes (beaches) and Nice (more beaches) before crossing the border to Italy.

Here, some head straight for Venice, but it’s a fair drag (about 350 miles), so you should probably stop off and where better than Milan, or maybe even Genoa, or both? You can also work in Florence and perhaps even Pisa if have the time and inclination.

Once you’ve enjoyed Italy, cross into Austria and, when in Innsbruck, wander its medieval lanes and sip sundowners while admiring the surrounding Alps. It’s about 100 miles from Innsbruck to Munich, which is the last big festival stop, and you should arrive just in time for Oktoberfest.

Once the hangovers pass, take time to explore Germany (we recommend driving to Cologne) before heading to Holland and taking on Amsterdam. You could head back to the UK from there but why not go down to Belgium (via Rotterdam), see Antwerp or Bruges. Then make the short journey to Calais and jump on the ferry home again. Epic, right? 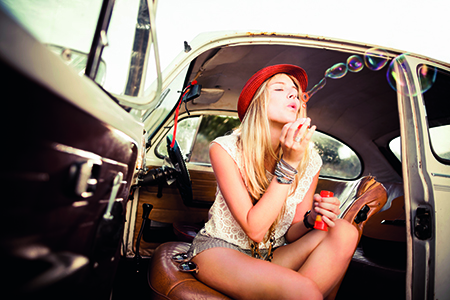 Spaceships Campervan Rentals has the following insider tips for renting a van:

Make sure you budget for fuel. Renting a vehicle with great fuel efficiency will leave you with plenty of cash for fun stuff!

Have more than one insured driver. Whilst you may have one person who wants to do most of the driving, it’s always good to have a backup.

All rental companies should provide you with European insurance cover and a roadside emergency kit, which is compulsory in some European countries.

Take a GPS with you, but don’t rely on it all the time. You’ll usually find the most interesting places when you’re lost!

If you’re planning a one-way trip, say, Rome to Barcelona, it’s worth checking the price in the opposite direction – starting in Barcelona and going the other way – as it may be cheaper.