However the win was spoiled somewhat when the news was posted online by a media outlet, well before the Gold Logie winner was even announced at the ceremony, let alone on the time-delayed broadcast on the Nine Network.

Although the report was immediately pulled off the News Limited website, social media was alive with the news and the media outlet was then evicted from the press room.

Talkin’ `Bout Your Generation host Shaun Micallef played down the leak at a post-Logies interview.

“The media and television can’t trust each other,” Micallef said in jest. “The relationship is ruined.”

Blake’s win was his second for the night, having taken out the Most Popular Light Entertainment Program with his offsider Andy Lee for Hamish and Andy’s Gap year.

Accepting the Logie, Blake thanked his comedic partner, who he said he had been friends with since they were teenagers.

He said the comic duo had started in television and will remain friends after their time in TV ends.

“We are the luckiest guys in the world,” he said in his acceptance speech. “Andy this is half yours.”

Blake also paid tribute to the Australian television industry and said he was humbled by the win.

Adam Hills was crowned the Most Popular Presenter, yet missed out on claiming the Gold Logie for the fifth consecutive year.

The ABC personality and presenter of Spicks and Specks and Adam Hills in Gordon St Tonight said he thought the gong would go to Blake.

“I’m genuinely shocked,” he told journalists after his win. “Tonight I was so convinced it was going to be Hamish Blake…Oh my God I think were my exact words.”

Asher Keddie may have been overlooked for the Gold Logie but she was beaming after taking home the Silver Logie for Most Popular Actress. 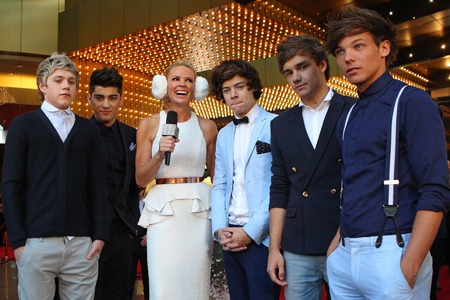 Nominated for her performance on the Network Ten show Offspring as well as the ABC’s Paper Giants: The Birth of Cleo, Keddie said she was glad both shows had resonated so much with the audience.

“Being recognised by your peers and being appreciated by the people you work with in the industry is important as well,” Keddie told reporters after accepting the award.

“To get recognised by both is the hugest compliment. I feel overwhelmed by it and really thrilled.”

Hugh Sheridan beat his Seven Network Packed to the Rafters castmate Erik Thompson for the Silver Logie for Most Popular Actor.

It’s the third year in a row Sheridan has won the award but he still seemed genuinely surprised that he’d won.

The Logies also paid tribute to music personality Ian “Molly” Meldrum, who suffered a severe head injury in a fall at his Melbourne home in mid-December 2011.

The audience at the ceremony heard from stars including Sir Elton John, Red Symons, John Paul Young and Delta Goodrem as part of Meldrum’s induction into the Hall of Fame.

“I refer to Molly as the Godfather, he always watches over me and many other artists,” Goodrem said.

Sir Elton also paid tribute: “I know I speak for many artists and music lovers around world when I say ‘thank you, there’s no one like you,” he said in a pre-recorded interview.

Boy band One Direction stole attention on the red carpet from the likes of Seal and Flo Rida, who opened the show with Good Feeling.

Thousands of teens waited outside the casino to get a glimpse of their heroes, who spent about 10 minutes on the red carpet while deafening screams drowned out interviews.

Programmers ensured the appeal of the band kept viewers from turning off, using their song One Thing to finish the show. 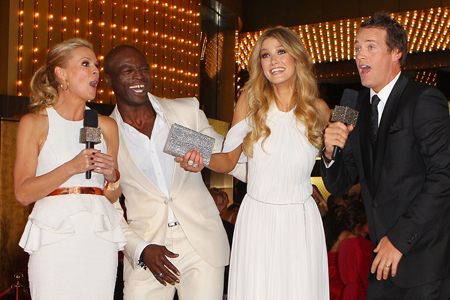 Packed To The Rafters (Seven Network)

Go Back To Where You Came From (SBS)